(Editor's note: ABC-7 has confirmed that Andre Jefferson was charged with a probation violation in March and has a prior conviction a couple years ago for petty theft.)

EL PASO, Texas -- Hundreds made their way out to Memorial Park in central El Paso this past Sunday demanding justice for George Floyd.

Out of the hundreds making their voices heard, three men found themselves arrested that evening. And 25-year-old Andre Jefferson believes he ended up in police custody because of the color of his skin.

"Yelling at me, trying to swing at me with a baton and all of a sudden someone yelled 'grab him' and I got grabbed thrown in the air, slammed on the ground and cops were on top of my back just yelling at me 'don’t resist,'" Jefferson said.

Jefferson told ABC-7 that he walked to the rally with another friend late in the day. They ran into police almost immediately, and were asked to leave Memorial Park along with the large group that was already there.

"There were people there that were throwing things and yelling, shouting, pushing cops," he explained. "People that were doing more violent things than I was doing… and honestly, I felt like they got arrested along with me because I was the only colored black guy there who got arrested," Jefferson said.

Jefferson was arrested alongside 24-year-old Abraham Urueta and 23-year-old Demetrio Martinez. According to police, both Urueta and Jefferson were arrested because they allegedly encouraged others to resist the police line being set by officers to disperse the group, while Martinez allegedly threw a tear gas cannister back at police.

While all three men face the same exact charges, Jefferson's bond was set $500 higher by a judge, which he does not believe that is fair.

"When we were at the holding cell he had asked me 'hey what was your bond set at' and I told him my amount and he told me 'dude that's crazy' because you and me got charged with the exact same thing and my bond is a lot lesser than yours," Jefferson said. "There is no way. I got a higher bond because of my skin color and that is just unfair."

Jefferson told ABC-7 that he has been in contact with several lawyers and plans to fight the charges. 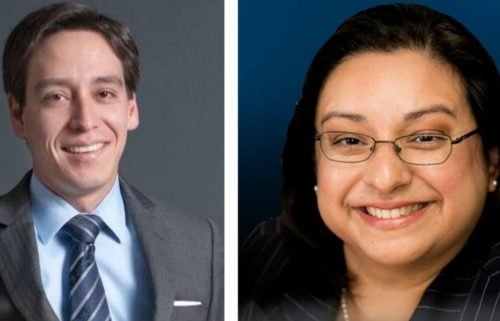