UPDATE, Nov. 2: Authorities on Tuesday released the identity of last week's McDonald's murder victim and released the mugshots of the two men charged in the killing that police say stemmed from a drug deal gone wrong.

Police identified the victim as Jacal Jacob Allen, 22, of El Paso. In an police affidavit obtained by ABC-7, investigators allege he was gunned down by two men who arranged to meet him at the west side fast-food restaurant to buy marijuana.

Police contend 22-year-old Robron Lewis and 24-year-old Tranquil Card shot Allen multiple times in front of his girlfriend, stole his 10 pounds of marijuana and fled; an off-duty officer tailed their getaway vehicle and the pair were ultimately caught hiding in a UTEP auditorium.

UPDATE, Oct. 29: A drug deal gone wrong led to a deadly shooting at a west El Paso McDonald's, police said Friday, with officers tracking two suspects to the UTEP campus where they were found hiding in the stage area of one of the university's auditoriums.

24-year-old Tranquil Card and 22-year-old Robron Lewis were each being held in the El Paso County Jail on capital murder charges.

Authorities said an off-duty officer saw the suspects flee Thursday night from the fast-food restaurant parking lot at 7900 N. Mesa Street after they had met up with the 22-year-old victim, whose identity wasn't released, to buy marijuana from him.

"One of the two men fired a handgun at the victim multiple times and fatally wounded him. The suspects stole the marijuana that the victim was selling," according to a police incident report released Friday.

Police tracked the pair to the UTEP campus and found their vehicle in a university parking lot; authorities asked students to shelter-in-place in their dorms as officers scoured the campus before capturing the wanted pair.

Judge Penny Hamilton ordered Lewis held on $2 million bond and denied bond for Card. It wasn't disclosed which of the two men actually fired the deadly gunshots in what was the city's 25th murder of the year (there were 22 a year ago at this time).

Meantime, UTEP President Heather Wilson on Friday acknowledged complaints from students about a lack of notification when police descended on the campus to arrest the two men wanted for the McDonald's homicide.

“There was a crime that happened off-campus last night that resulted in community police coming on-campus searching for the suspects. Our notification to the campus community to shelter-in-place was not fast enough. We are reviewing our response and lessons learned to fix problems,” she told ABC-7 in a statement.

ORIGINAL REPORT, Oct. 28: EL PASO, Texas -- A victim was shot and killed at a fast-food restaurant along Mesa Street in west El Paso on Thursday night and police launched a late-night manhunt for the shooter, with two suspects taken into custody near UTEP.

The shooting happened just before 10 p.m. in the 7900 block of N. Mesa near Interstate 10 in the McDonald's parking lot, according to police.

An ABC-7 photographer observed the deceased's covered body at the scene; police said the victim was a man in his early 20s.

There was no immediate word on the circumstances surrounding the shooting, but police converged around the UTEP campus in a search for two men wanted in connection with the death.

Officers closed off an area near University and Oregon streets and advised students living in the Miner Village to shelter-in-place. Police also asked all others to avoid the area.

Police later found a vehicle linked to the two suspects near the intersection of Schuster and Hawthorne.

Then after midnight, a police spokesman told ABC-7, "We do have some suspects detained, but we can't confirm they were involved just yet."

Around 12:30 a.m., UTEP officials finally tweeted an "All Clear" from the university's official account. It said, "Dangerous situation is over. Please return to normal activities." 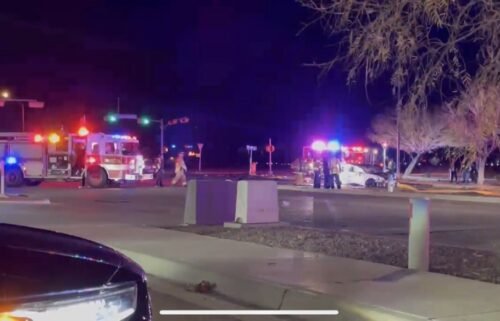 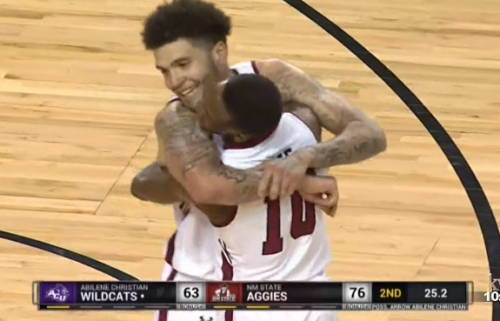