Sacramento (KTXL) — A state agency became the center of serious scrutiny in Sacramento when a Nazi flag was displayed prominently in its window, facing public streets.

Groups of people walking by could see the swastika very clearly through the window of a parole services office on 16th and T Street that is owned by the State of California.

People took pictures, videos, blasted the agency on social media and even sent videos to the FOX40 newsroom and also threatened to protest if it wasn’t taken down.

Johnson said that the swastika in the window was visible from where he works across the street.

“You didn’t have to be close to the building at all,” said Johnson. “People driving by could see it.”

And not only did Johnson find the image itself offensive, he felt it was a bad representation of his city.

“It’s the first thing that a lot of people who may be coming from the airport, who may be traveling to Sacramento and witnessing the city for the first time. It’s not necessarily one of the first things I’d want them to see,” said Johnson.

A parole official, who wasn’t authorized to talk to media, told FOX40 it was put up by an officer who deals mostly with gang members, and the whole wall of gang symbols was meant to educate other officers about what to look out for, and they said it was never meant to offend.

“An office such as this, they might handle material that might otherwise look objectionable or discriminatory,” said California Department of Corrections and Rehabilitation’s Dana Simas.

“We do take this issue very seriously,” said Simas. “The item has since been removed and we’re looking into the circumstances by which it was displayed, to begin with.”

Simas said the department will investigate.

Whatever purpose the swastika might have served the parole office, Johnson said state agencies should be aware of what an image like this represents.

“That type of, you know, context was not included whatsoever,” said Johnson.

The flag was taken down Monday morning by the office managers themselves after hearing out the people who felt offended by the flag. 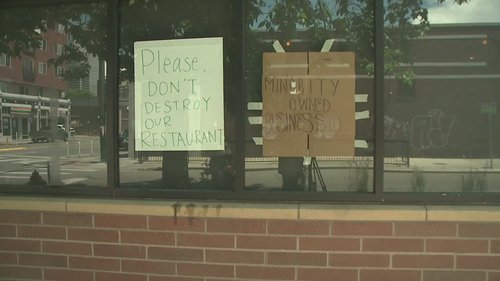