LONGVIEW, WA (KPTV) — A woman in Longview says her dog scared off a stranger who attacked her inside her bedroom Monday night.

Connie says the man moved the air-conditioning unit in her window to get inside her house near Beech Street and 23rd Avenue. She says he punched and kicked her to the ground when she arrived home from the dog park and found him hiding.

After slamming her to the ground, Connie says the man only said one thing to her.

Connie, however, was not alone–Harley, her Great Dane, was in the kitchen eating dinner. Harley is a rescue, Connie says, but this time, he rescued her.

“I yelled for him, he came in and was growling,” Connie said. “I think the guy got scared and jumped out my window.”

Connie after being rescued called 911. She says since Monday night, she has been keeping Harley extra close.

“He’s a good dog,” Connie said. ‘He’s very protective of me now … he protects me from everything, I love him very much.”

Longview police say they’re considering the incident a robbery, as it appears the suspect stole Connie’s AC unit and her TV.

Officers confirm the suspect is still at large and has not been identified, though he is described as a tall and skinny white man in his early 30s. He was last seen wearing a black hooded sweatshirt and blue jeans.

Anyone with information about this case is asked to call police. 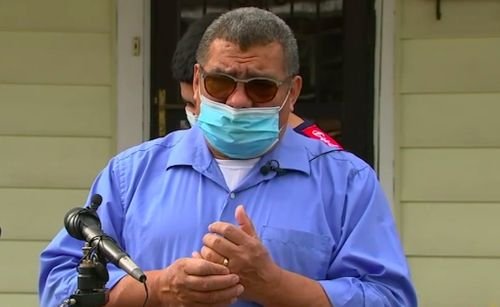