A text message that referred to Democratic presidential candidate Elizabeth Warren as “Pocahontas” that was sent through rival Bernie Sanders’ volunteer messaging system led to social media feuding and confusion among supporters of both candidates.

It turns out the text message came from a rogue Sanders campaign volunteer believed to be a supporter of President Donald Trump, the campaign told The Associated Press. The individual was removed from the system.

But the image of it, posted to Twitter on Monday by a pro-Warren fundraising group, led to misinformation and increased tension among Warren and Sanders supporters.

The campaign text message, addressed to a woman named Caitlin, asked: “Are you in for Bernie?”

The person responded by saying they weren’t because they were a Warren campaign volunteer.

“Pocahontas, huh?” the text from the campaign replied — invoking the racial slur Trump regularly uses to mock Warren, who had American Indian heritage.

Twitter users immediately questioned the veracity of the text message, with some claiming Warren’s campaign staged the exchange and posted it online to undermine Sanders. Others insisted the image of the text exchange had been digitally manipulated.

In response, some pro-Sanders accounts tweeted out satirical images of offensive text messages from the Warren campaign that were shared online thousands of times.

The Twitter user who posted the image of the text message did not respond to the AP’s request for comment.

The Warren campaign has no affiliation with the account that posted the text message campaign, a Warren spokesperson told the AP.

A Sanders campaign aide confirmed the text was sent from its system, which uses volunteers who can enroll online to send text messages to voters across the country.

The Sanders campaign told the AP that it believes a Trump supporter sent the text after joining the program. The campaign can view text messages sent by its volunteers, and it subsequently removed the individual from the program.

The Sanders campaign did not immediately respond to further questions about why they think the individual was a Trump supporter.

The cellphone number listed on the text message has also been disconnected. 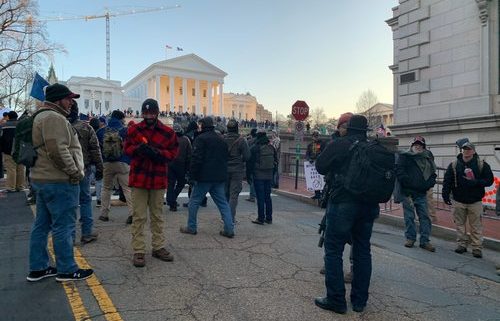