Leading progressive groups are issuing a call for unity as the public rift between Bernie Sanders and Elizabeth Warren widens ahead of the first round of Democratic presidential primary voting.

Eighteen days out from the Iowa caucuses, 18 influential organizations with ties to both candidates — and strong stakes in the wider movement — are launching a campaign to unite the Democratic left and push voters to act strategically on caucus night by not leaving their sites “without casting their final vote for one of the top two progressives in the race.”

The call for solidarity comes amid a stunning public breakdown between Sanders and Warren, friends for years who have, through the majority of the campaign, observed a political “non-aggression pact.” Its potential failure has progressive leaders worried that divisions on the left will clear the way for moderates like Joe Biden or Pete Buttigieg to cruise to the nomination.

As part of a new “Progressives Unite 2020 Pledge,” the groups are vowing to direct their fire on President Donald Trump and against “candidates supported by the corporate wing” of the Democratic Party. They are also asking progressive voters to “come together in state caucuses, primaries and conventions from the first vote in Iowa to the last vote at the DNC Convention in Wisconsin.”

The groups launched the unity pledge, which has been in the works since before tensions between the Sanders and Warren campaigns spilled out into the public, less than a day after CNN found and aired audio of a tense exchange between the candidates following Tuesday night’s debate in Des Moines, Iowa.

In their brief conversation, which ended without a handshake and with both stepping away in apparent frustration, Warren twice accused Sanders of calling “me a liar on national TV.”

“You called me a liar,” Sanders responded, before catching himself again: “You told me — all right, let’s not do it now.”

Neither campaign responded to requests for comment on the interaction. Though the candidates have remained silent in the aftermath, both sides have since signaled a desire to take down the temperature.

The organizations that have signed on to the pledge are home to some of the brightest stars in the progressive constellation, including the Working Families Party, which endorsed Warren last year, and Our Revolution, the pro-Sanders group formed after his 2016 primary campaign. Justice Democrats, which helped launch Rep. Alexandria Ocasio-Cortez’s historic 2018 primary bid, but has remained neutral in the primary, is also among the signatories, along with the Sanders-backing Sunrise Movement, a youth-led climate group best known for agitating for a “Green New Deal.” Ocasio-Cortez endorsed Sanders last October.

Democracy for America, which stepped up almost immediately following reports of disquiet between the two campaigns, issued a warning along with its commitment.

“When progressives fight each other, the establishment wins,” Charles Chamberlain, the group’s chair, said in a statement. “We saw it in 2004 when progressives took each other out and John Kerry slipped through to win Iowa and then went on to lose in November to a very unpopular Republican incumbent.”

The Progressive Change Campaign Committee, which has longstanding ties to Warren and was one of her earliest primary backers, also joined the pledge. In the aftermath of CNN’s initial report that, according to four sources, Sanders had told Warren during a discussion of the presidential election in 2018 that he did not believe a woman could win, the PCCC’s co-founders issued a statement calling the “back-and-forth” about the private meeting “counter-productive for progressives.”

On Thursday morning, it affirmed its support for a renewed détente between Sanders, who has denied making the remark, and Warren.

“In our opinion, the most inspirational and electable Democrat we could nominate is Elizabeth Warren,” the group said in a statement, before adding, “We are joining this effort out of a belief that it represents leaders in the progressive movement urging everyone from campaign staff to Twitter commenters to focus on defeating a corporate, establishment Democrat.”

“We are all in with Elizabeth Warren, but we’re lucky to have two progressive champions in this race fighting for transformational change,” Mitchell said. “Either Sanders or Warren would be a historic president.”

Mitchell, along with DFA’s CEO Yvette Simpson, Larry Cohen, the board chair of Our Revolution, and Justice Democrats’ executive director Alexandra Rojas, among others, also signed a joint statement calling on progressives to put a halt to the conflict, which has become increasingly venomous on social media channels.

“Sanders and Warren, as well as their campaigns and supporters, will need to find ways to cooperate,” the coalition leaders wrote. “The crossfire amplified by the media is unhelpful and does not reflect the relationship between two Senate colleagues who broadly worked well together for most of the last year. We hope to build solidarity between delegates affiliated with these two candidates prior to the convention and will encourage the campaigns to work towards a unified convention strategy after the final primaries on June 2nd.” 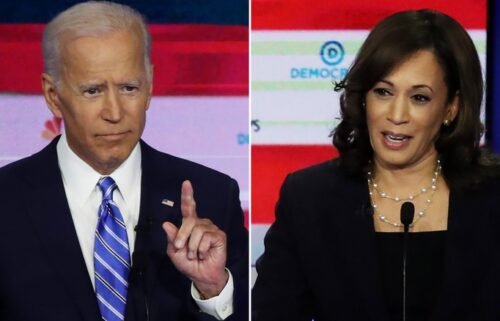