WASHINGTON, DC - U.S. Supreme Court Chief Justice John Roberts was sworn in Thursday afternoon to preside over President Donald Trump’s impeachment trial, then immediately administered the oath to the full Senate to ensure “impartial justice” as jurors for only the third such proceeding in American history.

Roberts made the short trip across the street from the Supreme Court before being ushered to the Senate chamber.

"Will all senators now stand, and remain standing, and raise their right hand," Roberts said.

“Do you solemnly swear that in all things appertaining to the trial of the impeachment of Donald John Trump, president of the United States, now pending, you will do impartial justice according to the Constitution and laws, so help you God?”

The senators, at their desks, responded and then were called up to sign the oath book

The Constitution mandates the chief justice serve as the presiding officer. Roberts, who has long insisted judges are not politicians, is expected to serve as a referee for the proceedings rather than an active participant. Senators will ultimately render the verdict.

Earlier Thursday, the Senate formally accepted the articles of impeachment, after they were handed off by key members of the U.S. House, officially triggering the presidential impeachment trial.

“Hear ye, hear ye, hear ye!" said the Senate's sergeant at arms, calling the ceremonial protocol to order that shifted the proceedings out of Speaker Nancy Pelosi’s Democratic-run House to the Republican-majority Senate.

"Hear ye, hear ye, hear ye: all persons are commanded to keep silent on pain of imprisonment, while the House of Representatives is exhibiting to the Senate of the United States articles of impeachment against Donald John Trump, president." https://t.co/lmJgZSs2bJ pic.twitter.com/KU7W3VOGWU

Schiff, standing in the well of the Senate usually reserved for senators, began reading the resolution, “Impeaching Donald John Trump, president of the United States for high crimes and misdemeanors.”

Rep. Schiff reads impeachment articles: "In the history of the Republic, no president has ever ordered the complete defiance of an impeachment inquiry, or sought to obstruct and impede so comprehensively the ability of the House...to investigate high crimes and misdemeanors." pic.twitter.com/jTHuObNZRk

All senators are expected to be in attendance for the duration of the trial, which is expected to last at least two to three weeks, according to several senators.

According to the trial decorum guidelines, when Roberts arrives every single day, senators will have to "silently rise” at their desks and remain standing until Roberts takes his seat.

Senators are expected to do the same when Roberts leaves the chamber every day, as well.

Senators will have to refrain from speaking to their neighboring senators in the chamber and will have to remain seated throughout the duration of the trial every day.

Cellphones and other electronic devices will not be allowed in the chamber -- senators and any staff allowed inside will be asked to keep their devices in a separate room outside the chamber.

Senators will have to refer to Roberts as "Mr. Chief Justice."

The House had voted on Wednesday to formally send the impeachment charges against Trump.

The House resolution officially appointed the seven managers, named by Pelosi, who will act as prosecutors presenting the Democrats' case.

"This is a very important day for us," Pelosi said, noting what she called the new "incriminating" evidence that has surfaced in the month since the House impeachment vote on Dec. 18.

The president calls the impeachment a “hoax," even as fresh information emerged Thursday about his actions toward Ukraine that led to the charges against him.

Trump faces a charge that he abused his presidential power by pressuring Ukraine to investigate Democratic rival Joe Biden, using military aid to the country as leverage. Trump was also charged with obstructing Congress’ ensuing probe.

Ahead of the proceedings, the Government Accountability office said Thursday morning that the White House violated federal law in withholding the security assistance to Ukraine, which shares a border with hostile Russia.

It’s undecided at this point if the Senate will hear from witnesses or consider new evidence during the trial. 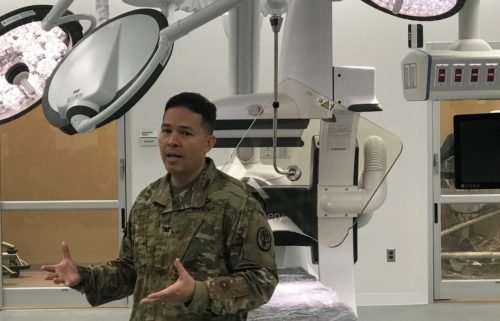