President Donald Trump is used to taking questions from celebrity anchors at Fox News, who lob softballs greased with praise. His appearance in a town hall Tuesday night, held by ABC News, featuring questions from undecided voters in Pennsylvania, was an altogether different experience. Faced with demands for answers, Trump resorted to his standard lies about what he has done and what his rival, Democratic candidate Joe Biden, would do as president.

The most obvious conclusion one can reach watching Trump lie about his own record and about what Biden proposes, is that Trump simply does not believe he has a superior plan to offer voters. He looked like a fast-talking salesman hawking an inferior product.

Consider, for example, his answer when Ellesia Blaque, who was born with a serious illness, and asked about his efforts to get rid of the Affordable Care Act, known as Obamacare, which guarantees coverage for people with preexisting conditions.

Trump responded with a fictional tale about Biden’s health care plans, so detached from reality that ABC’s George Stephanopoulos had to stop him by asserting a barrage of facts to which Trump responded with the only ammunition he could find: even more lies. The President claimed that Biden and the Democrats will get rid of preexisting condition coverage, while he will offer a plan to protect it.

If one could create reality by repeating a lie, a Trump health care plan that is better than Obamacare — any Trump health care plan — would have materialized long ago. Trump has been claiming he has one for at least four years. Again, on Tuesday he repeated this promise. In reality, the Trump administration is asking the Supreme Court to get rid of Obamacare and has offered nothing in its place. It is the Democrats who created a plan that made health care accessible for most, if not all Americans. Trump lied about Biden imposing, “socialized medicine.” Biden has run since the primaries in open opposition to Medicare for All.

The President claimed Biden will bring an economic depression, “the likes of which we have never seen in this country,” even though it is under Trump’s administration that the country is in the worst downturn since the Great Depression. He reiterated his claim that the economy will surge in a “super V” shape recovery. Many economists are skeptical of that rosy projection. Trump also falsely claimed Biden “wants to raise everybody’s taxes.” Biden has said he will raise taxes on people earning $400,000 a year or more.

Trump lied, equivocated and misled about the pandemic, claiming against all evidence that “We’re rounding the corner,” and in spite of expert predictions that more than 410,000 Americans will have died of Covid-19 by the end of this year. He said the virus will go away without a vaccine, but faster with one. In a curious moment, he explained that the virus would disappear as “you’ll develop — you’ll develop herd — like a herd mentality.” Perhaps he was thinking about herd immunity, but it’s unclear.

When asked about why he downplayed the coronavirus, he claimed that he “up-played it,” even though his monthslong denial is thoroughly documented. He again congratulated himself, claiming he did a great job handling the pandemic. Oddly, he expounded about the virus to a woman who said her mother died of cancer and was asking about his plans to expand immigration.

When asked about his refusal to issue a nationwide mask order, he harmfully repeated that “there are a lot of people think that masks are not good.” And then, making a bizarre statement about Democrats, he said: “They said at the Democrat convention they’re going to do a national mandate, they never did it.”

To lies and misrepresentations, Trump added a heavy dose of denial. Smacked with a series of questions about racism and allegations of excessive use of force by some police, particularly against African Americans, Trump appeared to be aiming not to gain the support of the people asking the questions, but at keeping the backing of his already-enlisted White nationalist fans.

He rejected any claim that the country has a problem with racism, and when asked what common-sense police reforms he could support, he offered perhaps the most startling response of the night. Almost all police officers are good, he explained, but they are afraid that if “they do something slightly wrong … their life is ruined.” Trump’s proposal amid the attention rightly being given to police killings? Give police more power. “We have to give the police back that strength that they had a short while ago and that they have in Republican cities,” he said.

This was not the performance of a candidate who believes he offers better policies than his rival. Instead, it was the work of a salesman who thinks he can outtalk the crowd — and make them buy something different from what they thought they wanted. 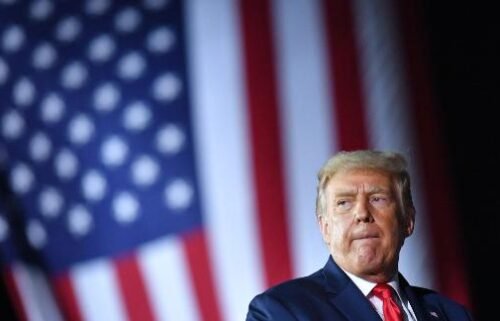