Republicans are trying to distance themselves from Saturday’s right-wing rally on Capitol Hill, an event that could present a tough optics problem for the party as Democrats plan to tie all Republicans to the most extreme elements of the GOP.

No sitting member of Congress is scheduled to appear at the “Justice for J6” event in Washington, DC, which is being organized by a former Donald Trump campaign staffer in support of the rioters who were arrested for storming the US Capitol on January 6.

But even without a presence on the ground, several Republican lawmakers have offered public support for insurrectionists who have been jailed and at least one House Republican — Rep. Ralph Norman of South Carolina — is slated to speak at a local “Justice for J6” rally at his state Capitol. Meanwhile, Trump’s lies about the 2020 election have become a litmus test in the GOP, with 78% of Republicans in a new CNN poll saying Biden did not win the 2020 election, while efforts to downplay the deadly events of January 6 have become pervasive on the right. And several Republican congressional candidates either participated in the January 6 “Stop the Steal” protest that incited the riot or will speak at the upcoming demonstration.

The revisionist history that is coursing through the GOP — and which will take center stage at Saturday’s rally — is threatening to become a political liability for the GOP, although Republican operatives believe the economy and inflation will be the most salient issues in the midterms. At the very least, events like the one this weekend are opening old wounds for the GOP and putting Republican leaders in an uncomfortable position: they are eager to turn the page on an ugly chapter in their party’s history, but are being forced to grapple with a fired-up base that is increasingly sympathetic to the rioters.

Rep. Sean Patrick Maloney of New York, the chairman of the Democratic Congressional Campaign Committee, is already framing the next year’s elections in these terms: “Democrats want to move infrastructure, and Republicans want to be insurrectionists.”

House Republicans only need to pick up five seats to win back the majority, and historical trends and redistricting maps both favor the GOP. Democrats, facing an uphill climb in their quest to retain power, are now coalescing around a midterm strategy that highlights the GOP’s extremism on everything from election lies and conspiracy theories to vaccine misinformation and strict abortion laws.

Specifically, Democrats are signaling that they plan to paint vulnerable Republican lawmakers as Trump-loyal radicals — especially after the failed effort to remove California’s Democratic governor on Tuesday, which Maloney argued was a rejection of the Trump brand and the GOP message.

“That ought to send a chill down the spine of Kevin McCarthy, who thinks he can do this toxic Trump stuff without the Trump turnout that papered over how bad that message is for voters in swing districts,” Maloney said.

Republicans, however, strongly pushed back on the notion that any broad electoral trends could be extrapolated from the recall effort in the Golden State, where registered Democrats outnumber Republicans by nearly 2 to 1.

“The recall election won’t have any impact on the midterms and anyone who claims otherwise doesn’t have a clue what they are talking about,” Torunn Sinclair, a spokeswoman for the House GOP’s campaign arm, said in a statement.

Republican leadership has yet to condemn the rally

As Democrats sharpen their message, law enforcement officials are bracing for potential violence and unrest on Saturday. The event comes the same week that the US Capitol Police arrested a man near the Democratic National Committee headquarters who was spouting White supremacist views and had in his truck knives that are illegal in DC — a reminder of the increasing threat posed by far-right extremists and domestic terrorism.

Yet even as the right-wing rally has sparked renewed fears of political violence, GOP leaders have not publicly condemned the upcoming event and its cause or actively encouraged people to skip it, though McCarthy did tell reporters he doesn’t think any Republican members will attend and top Republicans, including Trump, haven’t promoted the event.

McCarthy has also remained silent after freshman Rep. Madison Cawthorn of North Carolina suggested “rigged” elections could “lead to one place, and that’s bloodshed” and Rep. Mo Brooks of Alabama offered measured sympathy for a suspect who claimed to have a bomb in his truck near the Capitol last month and was critical of Democratic lawmakers.

Democrats are amplifying their warnings that the GOP’s continued embrace of Trump’s election lies and other extremist rhetoric could lead to a January 6 repeat. And Democrats are also slamming some on the far right for turning rioter Ashli Babbitt, who was shot and killed as she tried to storm the Capitol, into a martyr. An internal intelligence memo reviewed by CNN warned that there have been heated discussions online about Babbitt in connection to the Saturday rally, which Rep. Eric Swalwell has characterized as a Republican celebration of “cop killers.”

Even some in the GOP wish their own party would do a better job of calling out lies about the 2020 election.

“Frankly, I think we need more honesty,” freshman Rep. Peter Meijer of Michigan, one of 10 House Republicans who voted to impeach Trump for inciting an insurrection, said during a recent Washington Post Live event. “We’ve seen what can be done when individuals feel like they’re being winked and nodded to.”

Saturday’s rally is expected to be smaller in scale than the one on January 6, but law enforcement officials are preparing for the possibility that the crowd could turn violent or be armed. As a precautionary measure, the temporary fencing around the Capitol is being reinstalled, while the Capitol Police have requested assistance from the National Guard should they need it that day.

Matt Braynard, the organizer of the event, has insisted it will be peaceful and has encouraged attendees not to wear any Trump or election-related gear. Some of the most haunting images and videos from January 6 are of the pro-Trump mob beating police officers with American flag poles.

Saturday’s speaker lineup includes Joe Kent, who is running to unseat Rep. Jaime Herrera Beutler of Washington state, another of the 10 Republicans who voted to impeach Trump, and Mike Collins, who is vying to replace Rep. Jody Hice, a Georgia Republican who is running for secretary of state in the Peach State after pushing to overturn last year’s presidential election results in Congress. The public appearance by the pair of congressional candidates, who are both face GOP primaries, suggests that supporting the jailed rioters is something they believe could give them a boost with their conservative base.

Even if no sitting member of Congress attends, several House Republicans — including Reps. Louie Gohmert of Texas, Marjorie Taylor Greene of Georgia, Matt Gaetz of Florida and Paul Gosar of Arizona — have aligned themselves with a similar cause, referring to the jailed insurrectionists as “political prisoners.”

“I’m not sure I’ll be able to make [the rally], but we know that there were people that were arrested for January 6 activities, and they have been so badly mistreated,” Gohmert told CNN before the recess break. “So we haven’t given up.”

Ahead of the rally, the top four congressional leaders received a security briefing from US Capitol Police Chief Tom Manger, and House Speaker Nancy Pelosi has said that law enforcement seems better prepared this time around.

“The Leadership of the Congress, on a bipartisan and bicameral basis, has been briefed by the Capitol Police Board on the nature of the threat and the unprecedented preparations to address another attempt to defile our national purpose,” Pelosi said Wednesday in a “Dear Colleague” letter.

In describing the rally, Pelosi added: “There is a wish by some to continue the assault on the U.S. Capitol with misinformation and malice. … Working together, we will honor our oath of office to support and defend the Constitution, as we engage in reconciliation and pass legislation For The People.”

Whitney Wild and Oren Liebermann contributed to this report. 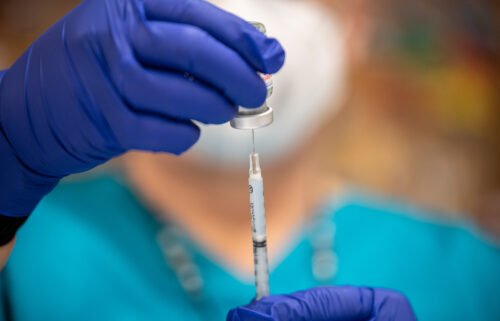