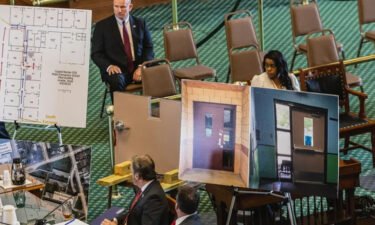 Herschel Walker, the former football star who is now the Republican nominee for a US Senate seat in Georgia, is piling dishonesty upon dishonesty on the subject of his college education.

In December, Walker’s campaign website falsely claimed that he had graduated from the University of Georgia, the school he left after his junior season to play professionally. (Walker’s campaign deleted the claim after the Atlanta Journal-Constitution inquired about it.) In April, CNN’s KFile team revealed that Walker himself had made the false graduation claim for years — and that Walker had even asserted that he graduated in the top 1% of his University of Georgia class.

But when Walker was challenged about his graduation deception in an interview last week with FOX 5 Atlanta anchor Russ Spencer, Walker declared he had never once said he graduated from the University of Georgia.

Spencer told Walker that he has a “phenomenal life story,” but that “in some instances you’ve exaggerated that story. You said that you graduated from UGA…”

Walker interjected: “I never said that. They say that. And I said — that’s what you gotta remember. I never, I never have said that statement. Not one time. I’ve said that I studied criminal justice at UGA.”

When CNN asked for comment on Tuesday, Walker’s campaign did not explain or correct his false claim that he had never said he earned his college degree. Spokesperson Mallory Blount instead said in an email: “Imagine a world where the media cared as much about solving inflation, gas prices and baby formula shortages as they do about re-litigating every word Herschel has ever said.”

In December, Walker told the Atlanta Journal-Constitution that he had returned to Athens, Georgia, to complete his degree after playing for the New Jersey Generals of the now-defunct United States Football League in the 1980s, “but life and football got in the way.”

But contrary to Walker’s claim last week in the FOX 5 Atlanta interview, he wasn’t always forthright on this subject. CNN’s KFile team found multiple instances in which Walker and his promotional materials inaccurately claimed that he had earned the degree:

Walker in a 2017 motivational speech: “And all of sudden I started going to the library, getting books, standing in front of a mirror reading to myself. So that Herschel that all the kids said was retarded become valedictorian of his class. Graduated University of Georgia in the top 1% of his class.”

Walker in a 2017 radio interview: “And people say, ‘Herschel, you played football.’ But I said, ‘Guys, I also was valedictorian of my class. I also was in the top 1% of my graduating class in college.'”

Text on an Amazon page for a 2009 edition of Walker’s 2008 book and on the now-defunct HerschelWalker.net website promoting the book: “After his first pro season, he finished his Bachelor of Science degree in Criminal Justice at the University of Georgia.”

And a 1986 Dallas Morning News article on Walker’s football career stated that Walker had completed his degree in criminal justice and featured this quote from Walker: “Getting a degree is one of the paths you can take on the way to becoming an FBI man. Of course, my life is not going in that direction right now, but I think police work, especially the FBI, would be my choice if I wasn’t a pro football player.”

Walker also declined to correct various people — including interviewers and a congressman who introduced him at a 2021 House subcommittee hearing — who wrongly said in his presence that he had earned his college degree.

There is no evidence that Walker was high school valedictorian, either.

Not the only deceptive claim in the interview

Walker’s false denial of his claims about having graduated from college was not the only deceptive moment of his interview last week with FOX 5 Atlanta.

Trump has called the 2020 election “stolen” on numerous occasions — and has used nearly identical language in Walker’s presence.

At a March rally in Georgia, which Walker attended, Trump falsely said Democrat Stacey Abrams, the current and former gubernatorial candidate, “brazenly stole the Georgia election” in 2020 from under the nose of Republican Gov. Brian Kemp. And at a September rally in Georgia that Walker also attended, Trump falsely said 2020 was “the most corrupt election in the history of our country” and a “rigged election,” and he talked about tens of thousands of people who supposedly had their votes “stolen.”

The Republican Accountability Project, a conservative group that has been critical of Trump and Walker, drew attention to this Walker claim in a Tuesday tweet.

Em Steck contributed to this article.