Covid-19 cases, hospitalizations and deaths are at record-high levels nationwide, and officials expect the US will soon bear the full brunt of another surge of infections fueled by Thanksgiving gatherings.

“We have not yet seen the full effect of a potential surge upon a surge,” Dr. Anthony Fauci told CNN Friday night. “The travel associated with Thanksgiving, the congregating at family and social gatherings with people indoors, sometimes without masks. So that may peak two to three weeks from now.”

And that surge will come right as travel and social gatherings will likely pick up again for the Christmas holiday.

As of Friday the US averaged 182,633 daily new cases over the last week — a record high for the country, according to Johns Hopkins University data. And the average number of daily Covid-19 deaths across a week hit 2,010 on Friday, the highest its been since April.

The US recorded 227,885 cases on Friday alone, the highest one-day count of the pandemic.

There is good news: US Food and Drug Administration (FDA) vaccine advisers are scheduled to meet to discuss Pfizer’s and Moderna’s applications for emergency use authorization (EUA) of their Covid-19 vaccines, which some state leaders say they’re expecting to get the first doses of in the coming weeks.

But health officials warn that while some Americans may receive a vaccine by the end of the year, the country likely won’t see any meaningful impacts until late spring.

In the meantime, experts project an incredibly challenging next few months.

More than 278,800 people have lost their lives to the virus in the US since the pandemic began. More than 10,000 of those were recorded in the four days since the beginning of December, with more than 2,500 daily deaths reported across the US each day.

And more than 101,200 Covid-19 patients were in US hospitals on Friday — yet another record, according to the COVID Tracking Project.

Hospital systems across the country are hitting their breaking points.

In Miami-Dade County, Chief Medical Officer Dr. Peter Paige says hospitalizations have spiked by nearly 140% over the past two months, while ICU rates have jumped 58% over the same time period.

“This is particularly concerning considering we really don’t know that the most challenging days may still be ahead of us,” Paige said.

Los Angeles Mayor Eric Garcetti on Friday called the accelerating pandemic “the greatest threat to life in Los Angeles that we have ever faced.” Hospitalizations in Los Angeles County have tripled in the last week, he said, and the county will likely run out of beds in two to four weeks if cases continue climbing.

Officials in the San Francisco Bay Area issued a stay-at-home order Friday, restricting the activities of more than 5.8 million people in an effort to reduce the spread of the virus. The order effects the counties of Alameda, Contra Costa, Marin, Santa Clara, San Francisco and the city of Berkeley.

It will go into effect Sunday and remain in place until at least January 4, according to Contra Costa Health Director Dr. Chris Farnitano.

The announcement came after California Gov. Gavin Newsom announced a stay-at-home order for regions where the capacity of hospital intensive care units drops below 15%.

While the Bay Area has not met that threshold, officials warned they’re seeing evidence of transmission over Thanksgiving weekend that could fuel a surge in their community.

“I don’t think we can wait for the state’s new restrictions to go into effect later this month,” Farnitano said Friday. “We must act swiftly to save as many lives as we can. This is an emergency.”

Here’s when most Americans will begin getting vaccinated

“Once you get into April, probably full blast with those individuals,” Fauci said. “That’s the reason why what we would really like to see is that once you get into the ‘open season,’ in the sense that anybody can get it, that we really have a full-court press on getting people vaccinated, because the quicker you get the overwhelming majority of the country vaccinated, the quicker you’re going to have that umbrella of herd immunity — which would be so, so important in bringing the level of that virus way, way down to below the threatening level.”

“The sooner we get there, the better we are.”

Earlier this week, vaccine advisers to the US Centers for Disease Control and Prevention voted 13-1 to recommend that both health care workers and residents of long-term care facilities be first in line for any vaccines that get the green light from the FDA.

Adm. Brett Giroir, assistant secretary for health at the US Department of Health and Human Services, said Friday at least 20 million Americans are expected to be able to get the Covid-19 vaccine by the end of the month — though a CNN analysis of state plans shows all will fall short of what they would need to fully vaccinate health care workers and long term care residents.

“The FDA will also be considering emergency use authorization of the Pfizer vaccine after the Vaccines and Related Biological Products Advisory Committee meeting on December 10, and we anticipate the Moderna vaccine will be considered by the committee the following week,” Giroir said in recorded remarks during a meeting of the National Vaccine Advisory Committee hosted by HHS Friday.

“We all expect these to be the first and second of a number of vaccines to be considered for an EUA.”

But the start of vaccinations will not mean an end to Covid-19, health officials warn.

“Vaccines and vaccination will add a major, major, powerful tool to the tool kit that we have,” Dr. Michael Ryan, the executive director of the World Health Organization’s Health Emergencies Programme, said. “But by themselves they will not do the job.”

WHO Director-General Tedros Adhanom Ghebreyesus added governments should not drop their guard, saying health care systems could still buckle under the pressure.

“Progress on vaccines gives us all a lift and we can now start to see the light at the end of the tunnel,” he said. “However, WHO is concerned that there is a growing perception that the Covid-19 pandemic is over.”

Leading public health officials in the US have emphasized masks will continue to play a crucial role in helping curb the spread of the virus — and save lives — in the coming months. According to the University of Washington’s Institute for Health Metrics and Evaluation (IHME), if 95% of Americans wore masks, about 66,000 lives could be saved by April 1.

The CDC, which has been gradually strengthening its recommendations on mask use, said Friday masks remain “critical” to controlling the spread of Covid-19, including sometimes at home.

“Because the highest risk for transmission has been documented among household contacts of Covid-19 patients, keeping the household safe requires physical distancing, using the other public health strategies summarized here, and, in particular, consistent and correct use of face masks (outside the household and in some circumstances within the household) to prevent introduction and transmission of (Covid-19),” the CDC team wrote. 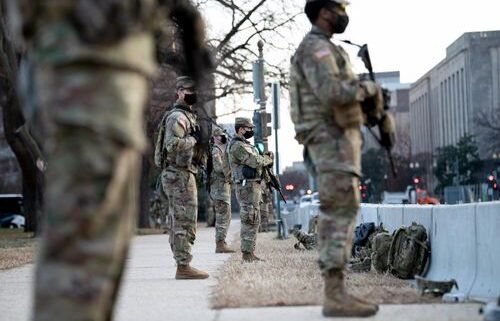