El Paso, Texas-- As parent’s sometimes we buy our children toys that never get played with. That was the case for Hector Gonzales Jr. When he bought his sons a few toy trains, but little did he know those toy trains would keep him busy years later.

“I got them a train when they were younger. I have the box still and I put it in the pantry and they were there for about forty years sitting in the same spot on the top,” said Hector Gonzales Jr.

Gonzales retired from north east Fire station 23 back in 1992. After noticing that his sons old toy trains were taking up room in a pantry, he decided pull them out to see if they still worked, and to his surprise, they still ran.

“I brought them down and I was like alright I’m gonna do something and I started with the tower,” said Gonzales.

“And it just kept going from one building to another," said Gonzales.

From the downtown union station, to the El Paso Plaza theatre, to the iconic Tap bar and restaurant where Gonzales and his wife of 56 years first met, Gonzales would spend hours upon hours creating iconic downtown El Paso buildings from cardboard, old cereal boxes and other Christmas decorations.

This new found hobby would keep him busy. Especially during the pandemic.

“It kept me going," said Gonzales, "It gives me something to do."

And although he is running out of space for his model trains, Gonzales hopes to continue adding to what he’s already built. 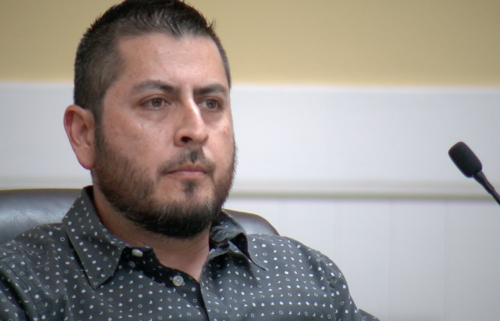