Images on social media showed demonstrators from the group Extinction Rebellion sitting on the ground, circled around a green boat that said “Act now.” Protesters wore orange life jackets and held up the flags of countries impacted by environmental disasters, including the Bahamas, parts of which were devastated by Hurricane Dorian last month.

At least 62 people were arrested, according to a New York Police Department spokesperson. It’s unclear what charges they will face, but they will likely include civil disobedience.

Extinction Rebellion, an environmental group founded in the UK, recently kicked off a series of coordinated worldwide protests meant to bring attention to the climate crisis.

“This is part of a week of action … and it is part of a global effort to peaceful, nonviolent civil disobedience,” said Christina See, a spokeswoman for Extinction Rebellion NYC. “By putting a boat in the middle of Times Square, it just is about making people wake up that we’re in a climate and ecological emergency.”

The scene was later cleared and the boat was towed away by police, said Arthur Wei, another Extinction Rebellion member.

“Our message is just that there is no more business as usual,” he said, “that this is a climate emergency and we’ve got to wake up and treat it as such.”

The protest forced police to close several intersections, according to CNN affiliate WABC, which reported a large police presence on the scene.

More than 250 Extinction Rebellion activists were arrested in London earlier this week as they demanded that governments take action to address the climate crisis. Earlier Thursday, an activist climbed on top of a plane on the runway at London’s City Airport. 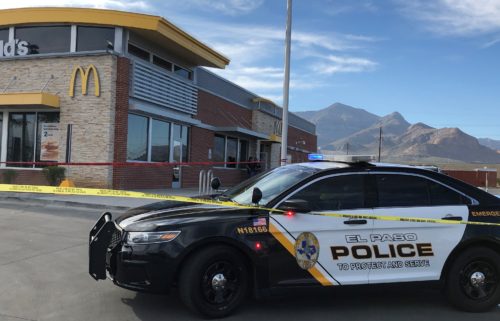