Let’s start with a bit of good news: A woman who was missing for days in a California National Park was found alive and safe after she spelled out S.O.S. with rocks.

California is battling more than a dozen blazes that have displaced hundreds of thousands of people, and a new wildfire has just cropped up, adding to the mess. The Getty Fire broke out near Los Angeles yesterday, in an area known for its high-dollar houses and famous residents. Fire doesn’t care how rich you are, though, so many in the area, including NBA star LeBron James, were evacuated. One place that wasn’t: The Getty Museum, a hub of one of the largest art organizations in the world. Its Los Angeles-area building is made of reinforced concrete designed to withstand wildfire threats. Power outages have also been a serious concern in the wildfire-ravaged area, and yesterday California’s Public Utilities Commission announced it is launching a formal investigation into the practice of investor-owned utilities initiating planned outages.

It’s official: The House will hold a vote Thursday to formalize the impeachment inquiry into President Trump and Ukraine. House Speaker Nancy Pelosi made the announcement yesterday after several weeks of closed-door depositions. Formalizing the inquiry will establish rules for public hearings, provide due process rights for the White House and allow information to be transferred to the committee that would ultimately consider the articles of impeachment. Senate Republicans praised the resolution, saying they hope it will open up the process and provide fairness to Trump.

You’ll have to shelve your spooky Brexit Halloween costume. The European Union has approved the UK’s request for a three-month extension to the Brexit process, avoiding a no-deal split at the end of the month. However, more scary times lay ahead. European leaders gave the UK a “flextension” until January 2020, which means the torturous process will likely continue through the end of the year. The agreement isn’t exactly a win for UK Prime Minister Boris Johnson, either. Remember, he really didn’t want to extend the Brexit date, and when he agreed to, he wanted an early general election in exchange. That’s not going to happen. Yesterday, Parliament rejected his bid to hold an early election, which would have helped him secure more political power. Johnson says his party is going to continue to fight for the election timeline they want.

Lebanon has been paralyzed by days of protests, and now Central Bank Governor Riad Salame says the country may be on the verge of economic collapse if an “immediate solution” isn’t found for the unrest. Lebanon’s banks have been closed since the demonstrations, sparked by a series of proposed austerity measures, began nearly two weeks ago. Protesters are forcing road closures throughout the country and filling the streets of the country’s urban centers to demand the resignation of the national unity government of Prime Minister Saad Hariri. Last week, Hariri released an action plan to try and appease protesters, but it didn’t work. Salame claims Hariri would resign, but fears what would happen if there was a vacancy in leadership.

A six-week strike at General Motors came to a close last week, but the precedent it set could influence union negotiations with other big auto manufacturers. Fifty-thousand hourly workers at GM went on strike in September to protest, among other things, GM’s closure of several US plants. The result was the longest auto industry work stoppage in more than 20 years. A four-year labor deal approved by the United Auto Workers union was ratified a few days ago, ending the strike. Now, the pressure is on Ford and Fiat Chrysler to bring their new labor deals to the table. Both companies had trouble getting their contracts approved by union members four years ago, and if their terms aren’t acceptable now, workers have more incentive to go on strike to get what they want.

People are talking about these. Read up. Join in.

Keep your eye on the ball!

Of all the places one wants to see a spooky face, space is definitely the last.

And to think for all this time we’ve been living in a world WITHOUT a guitar-shaped hotel?

Now you can pay $250 to constantly worry about losing one of your expensive AirPods.

Number of the day

That’s how many days the US Air Force’s X-37B space plane spent in orbit before recently coming back down to Earth. It was the longest mission in the mysterious military test program’s history.

Quote of the day

“The Republic will never tolerate hatred. Everything will be done to punish the perpetrators and protect our compatriots of the Muslim faith.”

— French President Emmanuel Macron, condemning an attack on a mosque in Bayonne yesterday. Two older men were seriously injured in the incident, and the suspect is an 84-year-old man with far-right ties.

May we all find something that brings us as much joy as this dog finds jumping into leaf piles. (Click here to view) 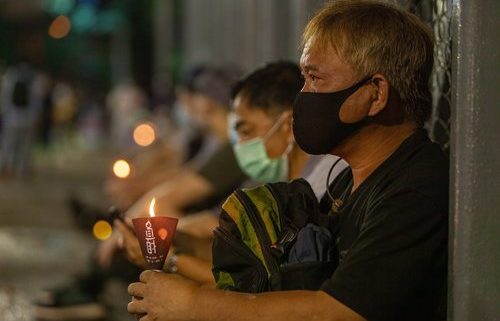