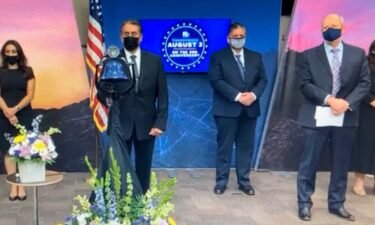 Speaking at the UN General Assembly on Tuesday, a representative for the UK issued a statement on behalf of 23 countries raising concerns over alleged human rights abuses in Xinjiang.

“(There are) credible reports of mass detention, efforts to restrict cultural and religious practices, mass surveillance disproportionately targeting ethnic Uyghurs, and other human rights violations and abuses in the region,” Karen Pierce said.

The 23 countries, including the United States, Canada, Japan and Australia, all called on China to “uphold its national and international obligations and commitments to respect human rights,” as well as to provide access to Xinjiang for international monitors.

Shortly after the UK’s statement however, Beijing’s ally Belarus made its own statement on behalf of 54 countries voicing approval of China’s “counter-terrorism” program in Xinjiang. Signatories included Russia, Egypt, Bolivia and Serbia.

“The joint statement spoke positively of the results of counter-terrorism and de-radicalization measures in Xinjiang and noted that these measures have effectively safeguarded the basic human rights of people of all ethnic groups,” representatives for Belarus said in a press release.

Belarus also called on countries who supported the critical statement to stop “politicizing the human rights issue” and making “baseless accusations against China.”

CNN has not seen the full list of countries who supported the Belarusian statement, but it is big increase on the 37 nations who supported the Chinese government’s Xinjiang program in July. That group included Muslim-majority countries such as Pakistan and Saudi Arabia.

Widespread reports of mass detention targeting Uyghur Muslims, as well as allegations of abuse and even torture within the “de-radicalization” centers, has seen China roundly condemned by Western governments and human rights organizations.

In October, Washington announced visa restrictions for Chinese officials suspected of being involved in the mass detention and re-education of Uyghur citizens.

Beijing has fiercely defended its domestic security program in Xinjiang, denying it is targeting Muslim citizens or depriving them of their rights. In July, top Xinjiang official Shohrat Zakir said the camps had been “hugely positive” for the region.