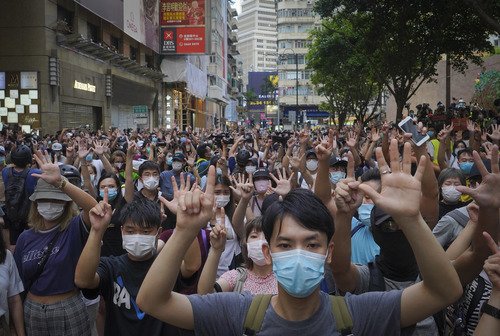 Prominent pro-democracy activist Nathan Law pledged Friday to continue to fight for Hong Kong’s democratic future, despite fleeing the city for what he said was his own safety.

Law, a former lawmaker and leader of the 2014 Umbrella Movement, left Hong Kong after China’s central government imposed a controversial national security law in the territory.

“I will continue my advocacy work no matter how threatening the government,” he stressed.

Law left the territory soon after speaking to a US Congressional panel via video link. The activist said he knew talking to lawmakers in Washington about the law would put him in its crosshairs.

Speaking to CNN, Law rejected any suggestion he had abandoned his fellow pro-democracy activists by leaving, saying they understood the need for someone with an international profile to speak up for Hong Kong on the global stage.

Following Law’s testimony, the House unanimously passed new sanctions on Hong Kong and Chinese officials responsible for the security legislation, an act that was quickly followed-up on by the Senate.

The Hong Kong Autonomy Act would impose sanctions on businesses and individuals that help China restrict Hong Kong’s autonomy. It will now go to US President Donald Trump for his signature before being enacted.

On Wednesday, Hong Kong’s top official, Chief Executive Carrie Lam, pushed back against foreign critics of the law, saying it was a “crucial step to ending chaos and violence that has occurred over the past few months” in the city.

“The national security law is the most important development in securing ties between China and the Hong Kong Special Administrative Region since the handover,” she said, framing criticism of the law as “vicious attacks.”

Critics say the law has stripped Hong Kong of its autonomy and precious civil and social freedoms.

Law praised the courage of Hong Kong citizens who turned out to protest even after the new security law was implemented on Wednesday, and insisted the movement had “a strong tenacity and perseverance” even in the face of a “zero tolerance” approach by security forces.

“We have to stand in different fronts, maybe with more swift, or even tougher, ways of protesting. But I don’t think Hong Kong people are giving up now,” he said.

Law added that Hong Kongers were preparing for a long struggle and understood that the “near future will be very bleak” as the authorities seek to limit dissent.

“We all understand that fighting for democracy takes decades,” he said. “We have to hang on, and we have to be very persistent. Otherwise we’ll be defeated by a very short-term vision on Hong Kong’s future. But I think we have a long way to go, and I think Hong Kong people will hang on.”

The new security law dramatically broadens the powers of local and mainland authorities to investigate, prosecute and punish dissenters.

Asked about his decision to keep his whereabouts secret, Law said that disclosing that information “would create uncertainties or potentially endanger my safety” and that of others.

Law said a lot of businessmen and professionals he knew were also “seriously thinking” about leaving Hong Kong because the law “creates a huge insecurity, not only for political activists but for talented people in Hong Kong who enjoy freedom of speech and free flow of information, and the law will basically endanger these fundamental elements for Hong Kong’s prosperity.”

Law ended a statement on Thursday with the slogan “Glory to Hong Kong,” a reference to an anthem of the protests, which is often heard sung at demonstrations and marches, but could soon be deemed illegal.

The anthem references the slogan “liberate Hong Kong, revolution of our times.” Plastered across graffiti, posters, t-shirts, and even political advertisements, it has been one of the most popular slogans of the protests which began last year. Use of it going forward, however, could result in a sedition charge under the new law, the government said Thursday.

“The slogan ‘Liberate Hong Kong, the revolution of our times,’ nowadays connotes ‘Hong Kong independence,’ or separating the Hong Kong Special Administrative Region (HKSAR) from the People’s Republic of China, altering the legal status of the HKSAR, or subverting the State power,” a spokesman said, adding that the new law “prohibits secession, subversion of state power and other acts and activities which endanger national security.”

Speaking to CNN Friday, Hong Kong justice secretary Teresa Cheng denied that any phrases or slogans were being “banned” under the law.

“When you say banning some phrases, that’s not accurate, because one has to look at the whole context of the evidence, and how things happened, and how those words were chanted, and what was the intention behind (them),” she said.

Of the 10 arrests under the law so far, made during protests on July 1, all were in relation to promoting Hong Kong independence, with people grabbed for showing flags, shouting slogans, or found with pro-separatist materials in their bags.

Police said all but one of those arrested have now been bailed until late July. They are facing charges of inciting or abetting others for the commission of secession or subversion, which could carry with it a fixed-term sentence of five years in prison.

The people responsible for establishing the guidelines for how the law will be exercised were appointed Friday, including a Chinese official known for his hardline policies in dealing with pro-democracy protests in southern Guangdong province, Zheng Yanxiong.

Zheng was appointed by China’s State Council to head the new Office for Safeguarding National Security in Hong Kong on Friday, according to state news agency Xinhua.

Zheng’s organization will also have the power to take over certain cases, removing suspects for trial in China under the Chinese legal system. The law specifies that agents working for the office “shall not be subject to the jurisdiction of the Hong Kong Special Administrative Region,” and police in the city are obliged to assist in their duties and prevent anyone obstructing them.

According to the South China Morning Post, when overseeing Wukan, a southern Chinese town which saw mass anti-government protests in 2011, Zheng remarked that “Pigs will fly before the foreign press can be trusted.” He also accused residents of “colluding with foreign media to create trouble.”

Much about how the new security law will be applied remains unclear, and this has left many people nervously policing their own behavior and avoiding action that could step over the new invisible red lines.

Many shops and restaurants that had been vocally supportive of the protest movement could be seen removing posters and slogans from their walls, for fear of potential prosecution. People have also been scrubbing their social media and deleting WhatsApp chats, and journalists have begun to face much more trepidation from sources about speaking on the record about the law.

Speaking at a protest on July 1, one woman who declined to give her name said “it will be hard not to self censor when there’s something like this going on.”

“I feel like most people would be more cautious with what they say,” she added.

One thing she said would change would be how Hong Kongers use the internet, adding she was planning to use a VPN and secure apps more often. Samuel Woodhams, Researcher at the London-based internet research firm, Top10VPN, said in an email that there had been a 321% rise in demand for VPNs on June 30 compared the rest of the month’s daily average.

Speaking to local media this week, Lento Yip Yuk-fai, chairman of the Hong Kong Internet Service Providers Association, said that companies will now have no choice but to help police if they make national security requests.

“When fear comes, the first thing to retreat is speech,” Zhang Jieping, founder of Matters, an anti-censorship publishing platform, said this week. “In the past few days, people have swallowed what they wanted to say at the mere thought of how horrible the law could be. And after the law became public, people generally thought it was actually worse than they could have imagined. Their hesitant fear was finally realized. Whatever words were swallowed can never be spoken.”

Tam Yiu-chung, the sole Hong Kong member of China’s National People’s Congress Standing Committee, which drafted the security law, said that “social media should not be used to incite crimes or fear or other forms of chaos and turbulence in society.”

He added however that fears about the law were overblown and people would not find their lives overly constrained by it, suggesting there was a need for greater “education” about the new regulations.

Cheng, the justice secretary, said that “freedoms that are enshrined in the laws in Hong Kong are still going to be respected and protected.”