By David Culver and CNN staff

China has touted its newly completed Olympic ski venue as an example of its commitment to making the Beijing Games the greenest and cleanest in history.

But there’s just one problem — it was built in the middle of a nature reserve.

Chinese organizers say the National Alpine Ski Center in Yanqing, about 90 kilometers (56 miles) from central Beijing, will be 100% powered by wind and solar energy.

According to satellite images and official maps analyzed by CNN, the ski center tears through the former core area of Songshan National Nature Reserve, a park founded in 1985 to protect its dense forests, alpine meadows and rich biodiversity.

By the time Beijing won the bid for the 2022 Winter Games in 2015, the boundaries of the reserve had been redrawn to exclude the area where the ski field is now built. The new boundaries cover a larger total area, but critics say that’s unlikely to compensate for the loss of wildlife habitat and damage to the site’s delicate ecosystem from building the venue.

This apparent conflict with Beijing’s green narrative comes amid mounting questions about the environmental cost of the Games. Given the city’s arid climate, it will rely entirely on artificial snow — which experts warn would be a drain on energy and water resources.

And such environmental concerns won’t end with the Olympics. As the Chinese government looks to turn Yanqing into an international skiing hotspot and build more ski slopes, conservationists fear it could cause further damage to the local ecology.

For decades, Songshan National Nature Reserve provided a sanctuary to many protected animal and plant species, including the golden eagle and rare orchids.

Under Chinese law, nobody is allowed to enter the reserve’s core area, except for scientific research with government approval. And a 2007 planning document obtained by CNN made it clear that development within the core area at Songshan was forbidden.

So when Beijing won the bid to host the 2022 Winter Olympics, conservationists and nature enthusiasts were shocked to find that the proposed alpine ski site fell exactly within the reserve’s core area on the Xiao Haituo mountain, the second highest peak of Beijing.

The discovery sparked an outcry on social media, with many internet users questioning why the Olympics venue had to be built inside a nature reserve. Censors soon moved in, deleting viral posts that drew hundreds of thousands of clicks, but that only further fueled the anger.

As pressure mounted, Zhang Suzhi, then executive deputy head of Yanqing county, told state newspaper the Beijing Daily in 2015 that the boundaries of the Songshan National Nature Reserve had been redrawn, and the Winter Olympic venues did not fall inside the reserve.

That appears to be what Chinese organizers told the International Olympic Committee, too. In its evaluation report of Beijing’s bid for the 2022 Olympics in June 2015, the IOC said the proposed ski area would be “adjacent” to the reserve.

But it noted that the proposed site is “part of the same mountain ecosystem” as the reserve, adding: “Ski resort development in this area would therefore require substantial ecological studies and mitigation measures to limit environmental impact.”

According to Zhang, the Yanqing official, the revised borders expanded the total area of the nature reserve by 31% and added more types of vegetation.

“After the adjustment, the nature reserve is richer in biological resources, more complete in ecosystem, stronger in water conservation and higher in conservation value,” he told the Beijing Daily.

But Zhang brushed over a crucial fact: the original core zone — including the highest peak, which experts say has the most biodiversity significance — was no longer part of the protected lands.

‘This is really a great pity’

Chinese experts and environmental activists say expanding the reserve doesn’t compensate for the loss of the original core area.

“This is really a great pity, because (the original core zone) is one of the very few places in northern Beijing that has alpine meadows,” said a Chinese ecological expert, who asked not to be named for fear of repercussions. “Such a unique ecosystem was why it was included in the original nature reserve in the first place.”

And compared to other parts of the reserve, the core area also had a higher rate of wildlife sightings, according to a biodiversity monitoring study conducted between March 2013 and February 2014 by researchers at the reserve’s management office.

The Chinese ecologist criticized a lack of transparency in the government’s decision-making. “It did not release any environmental impact assessment for public consultation,” the ecologist said.

When construction of the National Alpine Ski Center began in 2017, environmentalists tried to seek answers.

Environmental advocate Shi Dianshuo urged the government to release detailed information on the boundary change. The government rejected his request on the grounds that the information “involves state secrets,” according to a notice issued by the Ministry of Environmental Protection posted by Shi online.

Unconvinced, Shi took the ministry to court to have the decision overturned.

A court date was originally scheduled for February 2018, but a source with direct knowledge of the case told CNN the hearing did not proceed, nor was it acknowledged by the government or mentioned anywhere in state media. Shi declined CNN’s request for an interview.

To observe the disruptive impact of the ski slopes’ construction on wildlife, researchers at the reserve’s management office set up cameras throughout the new reserve in 2017 to monitor their activity.

“As the reserve is adjacent to the Yanqing competition zone, human activities have increased dramatically, and road transport and constructions have affected the population size and behavioral rhythm of wild animals in the area,” the study noted.

The researchers found that nocturnal animals, such as leopard cats and greater hog badgers, had become much more active during the day — likely to avoid construction work at the ski slopes.

They included setting up wildlife corridors and installing more than 600 artificial nests in the competition zone, as well as transplanting 11,027 plants and 24,272 trees to sites at the foot of the mountain.

But experts noted that the Songshan National Nature Reserve went entirely unmentioned in the 130-page report.

“Nowhere is the word ‘nature reserve’ mentioned and nowhere is it said that the core area … has been declassified and transferred to a new area,” said Carmen de Jong, a geographer at the University of Strasbourg.

“If you’re destroying the upper high-altitude mountain parts, it’s no use to try and cue in the lower parts, because you have impacted the very, very sensitive ecosystem,” she added.

The Chinese Ministry of Ecology and Environment did not respond to CNN’s request for comments about the boundary change.

One of the world’s steepest runs

It’s clear why Xiao Haituo mountain in the reserve was chosen to be the site of the Winter Olympic ski events — its vertical drop of 900 meters (2,952 feet) made it an almost perfect location for what is now one of the world’s steepest ski runs.

To hold an Olympic downhill event, the proposed ski site must have a vertical drop of at least 800 meters (2,624 feet) — a requirement that rules out most mountains in Beijing. Across the provincial border in Hebei, however, there are no shortage of sites that meet the Games’ standards, according to Chinese experts.

The city of Zhangjiakou, for example, is already well developed for winter sports and a popular skiing destination in China.

“If it’s just for holding the Olympics, a lot of ski resorts in Hebei are good enough, there’s no need to touch the nature reserve at all,” the Chinese ecologist said.

Instead, he suspects, economic considerations may be at play. “Beijing doesn’t want the future winter sports revenue to be diverted to Hebei,” he said.

The Beijing Organizing Committee did not respond to CNN’s request for comment over whether it was aware the ski center was built inside the former core area of the nature reserve.

In a reply to CNN, the IOC said the development of the Yanqing zone is “transforming the region — a rural suburb of Beijing — into a major four-season tourism destination, improving lives and boosting the local economy.”

The IOC — which has pledged to make the Games climate positive by 2024 — also praised China for delivering on its promise to hold a “carbon-neutral” Games.

Beijing’s ambitions for Yanqing are not limited to the Olympics. It has already announced plans to turn the region into an international skiing destination by the end of 2024. The goal is to expand its ski slopes to 100 hectares and welcome more than half a million visitors a year.

However, conservationists fear that future development could cause even more damage to the surrounding forests and wildlife.

“The increase in the number of people is what will cause great pressure on the local ecology, which is the biggest concern,” said a Chinese expert who didn’t want to be named due to fear of repercussions.

Luo Shujin, a conservation biologist at Peking University, has been studying wildlife around Yanqing for years. She was tracking leopard cat droppings on another mountain in Yanqing in December 2018 when she saw the ski runs gleaming in the sun across the valley.

Luo was excited: “I thought about that famous pictures of a puma walking by the Hollywood sign in L.A., and I asked myself: can we get a picture of a leopard cat walking by the alpine ski course of the Beijing Winter Olympics?”

Due to the pandemic, Luo couldn’t access the mountain for more than a year. When she finally returned in 2021, she got the shot she wanted.

In the photo, a leopard cat strolls casually into the frame of the camera, walking on snow, against a backdrop of white ski runs on Xiao Haituo mountain.

It ended up going viral. Conservationists saw it as a sign that within miles of the ski resort, rare wild animals could still thrive.

But their future remains uncertain. If Yanqing’s ski slopes continue to expand, analysts say it could threaten the surrounding ecosystems — including the existing nature reserve.

“A nature reserve should be protected exactly because it has a fragile ecosystem,” the Chinese expert said. “Given how close the skiing venue is to nature reserve, if a large amount of human activities go on for a long time, they are bound to cause great disturbance to the local ecology … and might even break the balance.” 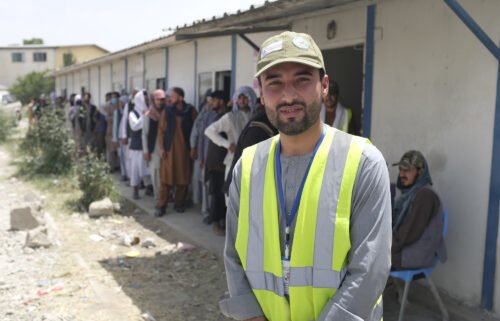