Four premium-type series inaugurate Apple TV+, and even by the hit-miss standards of plain old TV, it’s an underwhelming crop. Indeed, in terms of top-tier fare springing from the premium networks and services, these Apple offerings fall pretty far from the tree.

“The Morning Show,” reviewed separately, is the highest-profile newcomer, and it’s probably the second best of the bunch. But surveying the other three series that will also premiere on Nov. 1 — presented in here in descending order of interest — that comes close to qualifying as damnation with faint praise.

Beginning in 1969, this series from “Battlestar Galactica” producer Ronald D. Moore hinges on a tantalizing “What if?” premise — namely, having the Russians beat the US to landing on the moon, despite John F. Kennedy’s inspirational challenge.

What ensues from that is a kind of Butterfly Effect, one that alters the course of history in a variety of ways, as Richard Nixon (cleverly woven throughout) schemes to recover from this disgrace, which eventually includes bringing women into the program.

Joel Kinnaman (“The Killing”) plays one of the central astronauts, periodically clashing with his boss (Chris Bauer) as the NASA team wrestles with the political fallout.

It’s handsomely produced, and captures some of the romance around the space program, echoing recent movies like “Hidden Figures” and “First Man.”

Give “For All Mankind” credit for a nicely calibrated takeoff, but five episodes in, it’s following the kind of ragged flight plan that doesn’t raise hopes that the show has the right stuff to stick the landing.

Hailee Steinfeld stars as Emily Dickinson, the poet whose personal life has become as much a source of fascination as her work, including the indie movie “Wild Nights With Emily.”

“Dickinson” greets her at an earlier age, as she chafes against the disapproval of her father (Toby Huss), who sees the prospect of his daughter being published as a source of undying shame. Meanwhile, Emily frets about her friend Sue (Ella Hunt) marrying her brother (Adrian Blake Enscoe), while resisting pressure from her mother (“30 Rock’s” Jane Krakowski) to pair her off.

Created by Alena Smith (whose credits include “The Affair”), the series makes a misguided stylistic decision, featuring modern music and dialogue — lines like “I’m pretty psyched about it” and “This is such bull***t” — in a manner that actually works against appreciating Emily’s 19th-century feminism. Why devote a series to this complex historical figure, then turn it into a knockoff of “Riverdale?”

Steinfeld is an appealing young star, but she deserves a better vehicle than this one. As Dickinson wrote, “Hope is the thing with feathers.” It will take more than that to get “Dickinson” off the ground.

“Dickinson” is spared the “Apple TV+’s worst show” designation by this ridiculous drama, which — even with “Aquaman’s” Jason Momoa in the lead — can’t overcome its risible premise.

The drama is set centuries after a 21st-century calamity that killed most of the world’s population, and blinded the rest. Primitive societies have developed, but the mere concept of sight is considered so heretical that warriors are dispatched to kill anyone who might believe in it.

Momoa plays Baba Voss, a tribal leader whose current wife arrived carrying twins. The birth father, it turns out, could see, and the hunt for him leads to a pitched battle in the first episode, as Baba seeks to protect the infants, even if their destined fate is difficult to, well, ascertain.

Although the show creates a ruthless world — the action is brutal and visceral, and the story advances quickly — it’s not inventive enough to overcome the stilted dialogue and stock characters, including an evil queen (Sylvia Hoeks) and her minions, whose military accessories include horses and dogs.

“That’s not what the owls tell me,” Baba’s wise shaman adviser, played by Alfre Woodard, says at one point.

Saying it’s not worth watching “See” is a little too easy. Still, with apologies to the owls, this show is strictly for the birds. 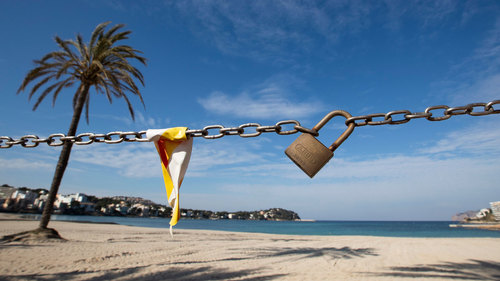