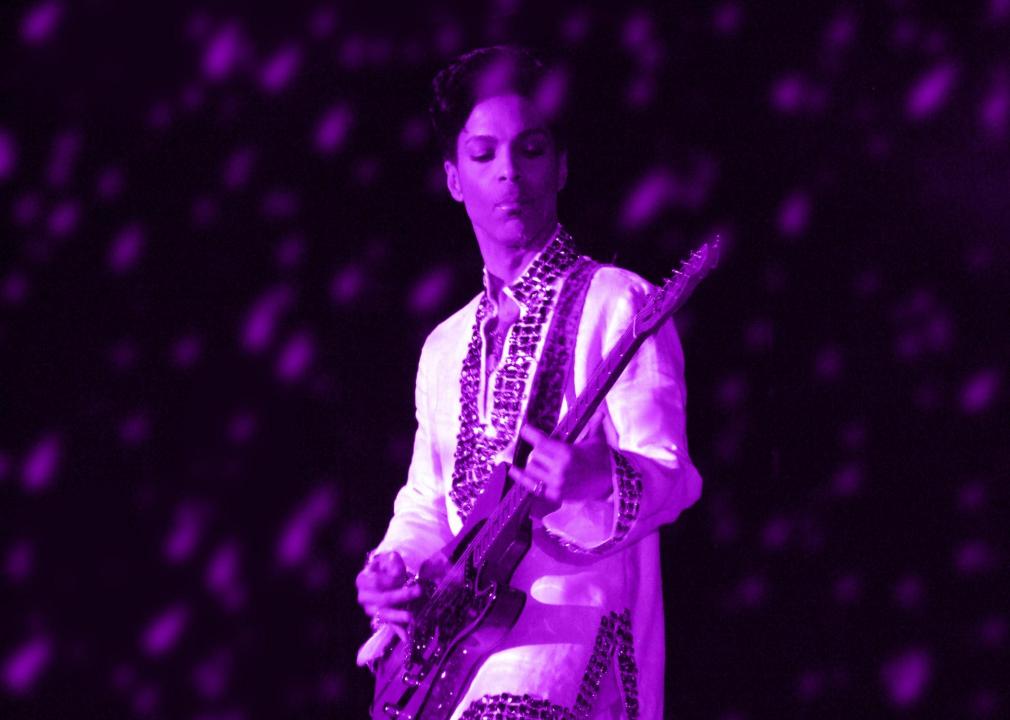 Since the ceremony began in 1959, then hosted at the Beverly Hilton, the Grammy Awards have been considered among the most important awards in music.

That first year rewarded the likes of iconic stars including Frank Sinatra, the Kingston Trio, Count Basie, and Ella Fitzgerald. Since then, many other outstanding artists—considered by critics and fans to be among the best of all time—have also found acclaim.

But while many Grammy wins are well deserved, the awards have had their fair share of controversies.

Stacker compiled an original list using independent research to round up some of the top Grammy flubs and how those decisions have aged ahead of the ceremony, which, since the ongoing COVID-19 pandemic, was delayed for two years in a row in 2021 and 2022.

Music fans have complained that the voting system skews in favor of those with top-selling records rather than the best music, divorcing winners from the reality of what’s happening in the industry. And following an unprecedented snub for a bid at the 2021 ceremony for his critically acclaimed album “After Hours,” The Weeknd even spearheaded a boycott against the show, accusing the awards of corruption.

Some undeniably iconic artists, such as Diana Ross and Jimi Hendrix, never won awards throughout their vaunted careers. What’s more, certain winners beat out superior artists (or at least artists that fans or critics insisted were better). In a few cases, artists were nominated in categories that made no sense for their style of music.

Keep reading to discover some of the most controversial Grammy wins in history.

You may also like: Most Emmy wins of all time 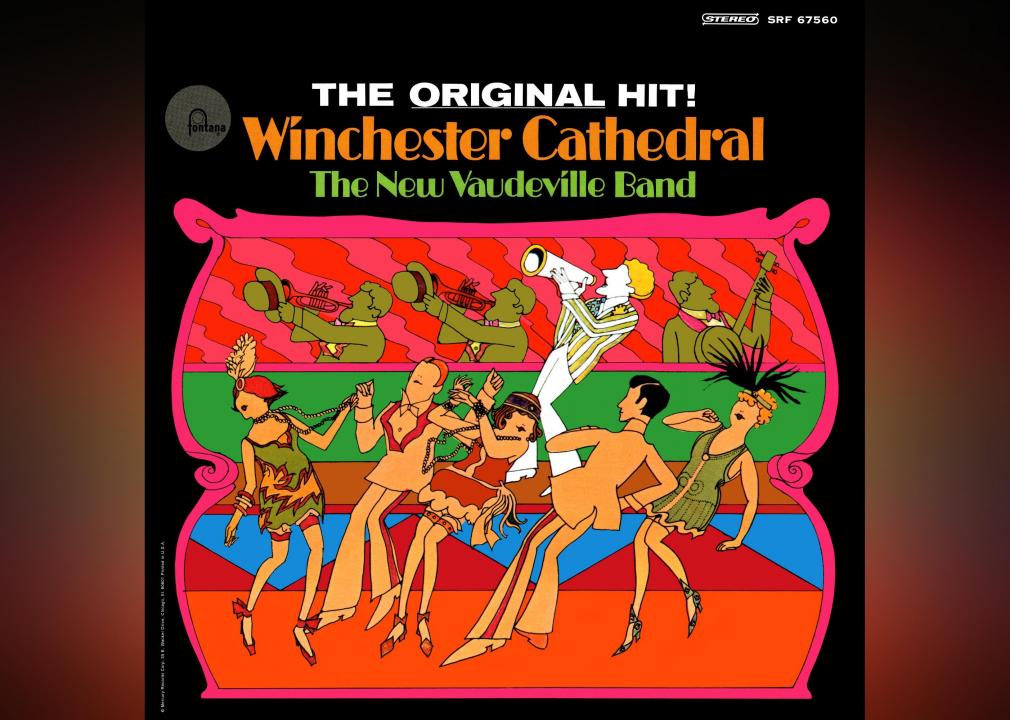 New Vaudeville Band, the 1960s novelty pop band, won Best Contemporary Rock & Roll Recording for their song “Winchester Cathedral” in 1967. They beat out “Monday, Monday” by The Mamas & the Papas, “Eleanor Rigby” by The Beatles, and “Good Vibrations” by The Beach Boys—all of which are considered classics today. 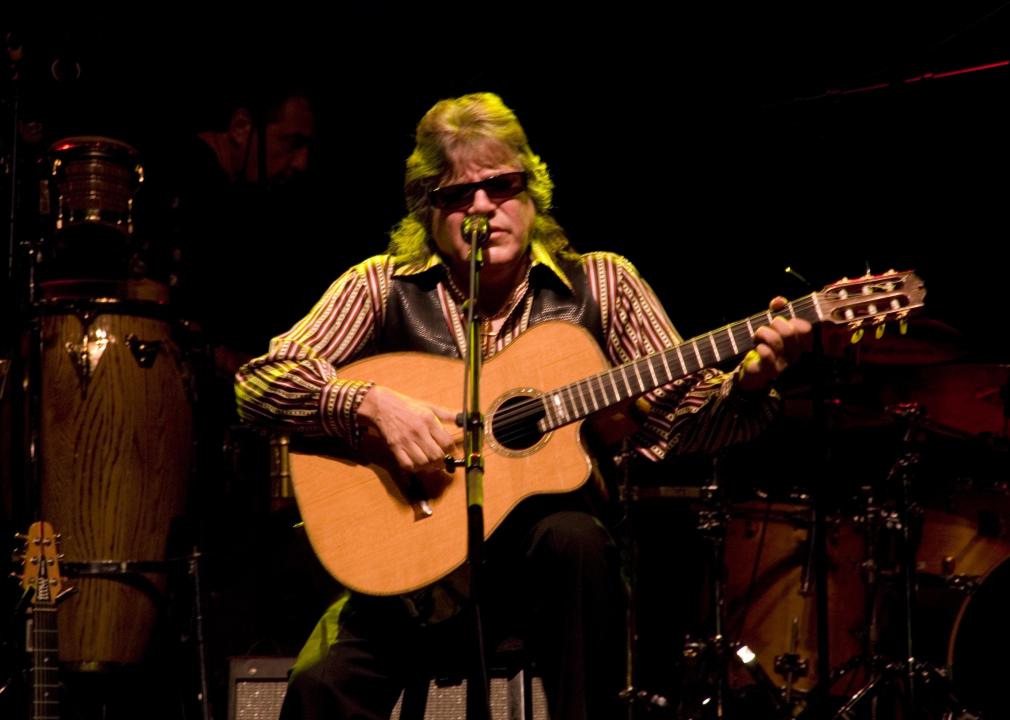 It wasn’t that José Feliciano was undeserving of the Best New Artist award in 1969, but people were surprised that he beat Cream—among the best rock bands of all time. Feliciano’s lasting contributions include singing the most famous version of “Feliz Navidad.” In 1984, Michael Jackson’s acclaimed album “Thriller” won Album of the Year. It was a deserved award in many fans’ eyes. However, the competition may not have been entirely fair. Prince’s classic “1999” wasn’t even nominated. That album, in which Prince plays almost all of the instrumentals himself, secured his place among music’s greats and is largely considered one of the greatest albums of all time. 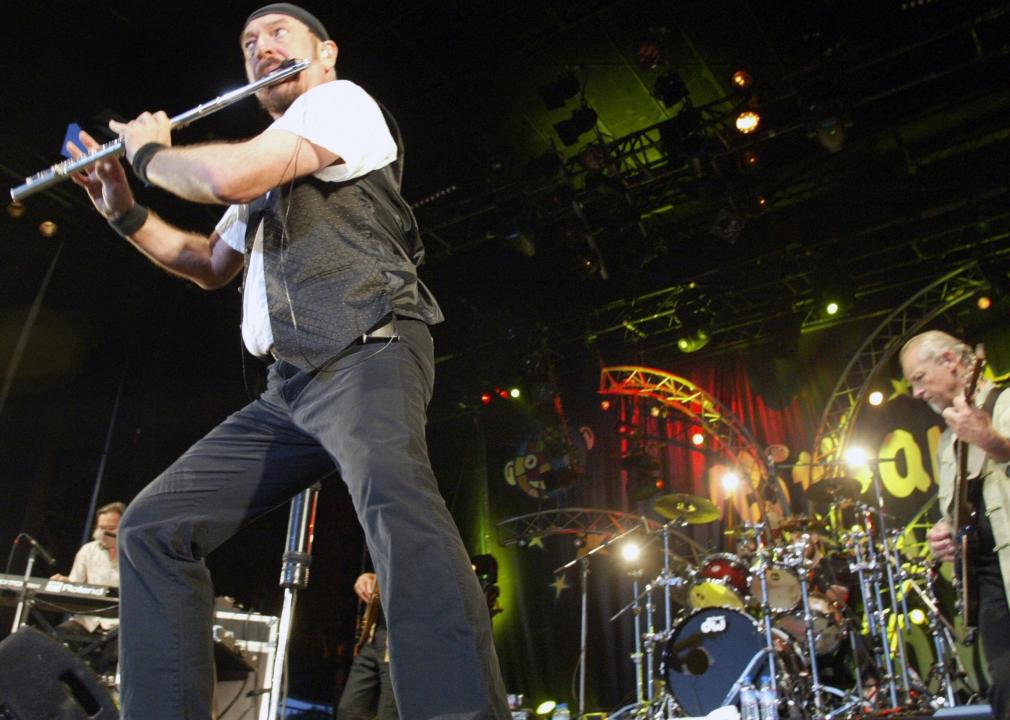 In 1989, the Grammys introduced a new category to indicate that they were hip to the times: Best Hard Rock/Metal Recording. Among the nominees were Metallica, Iggy Pop, AC/DC, and Jane’s Addiction. When Jethro Tull—a progressive rock band that heavily featured flute—won, many in the crowd started laughing. Today, it’s still considered a hilarious bungle, even by the members of Jethro Tull. 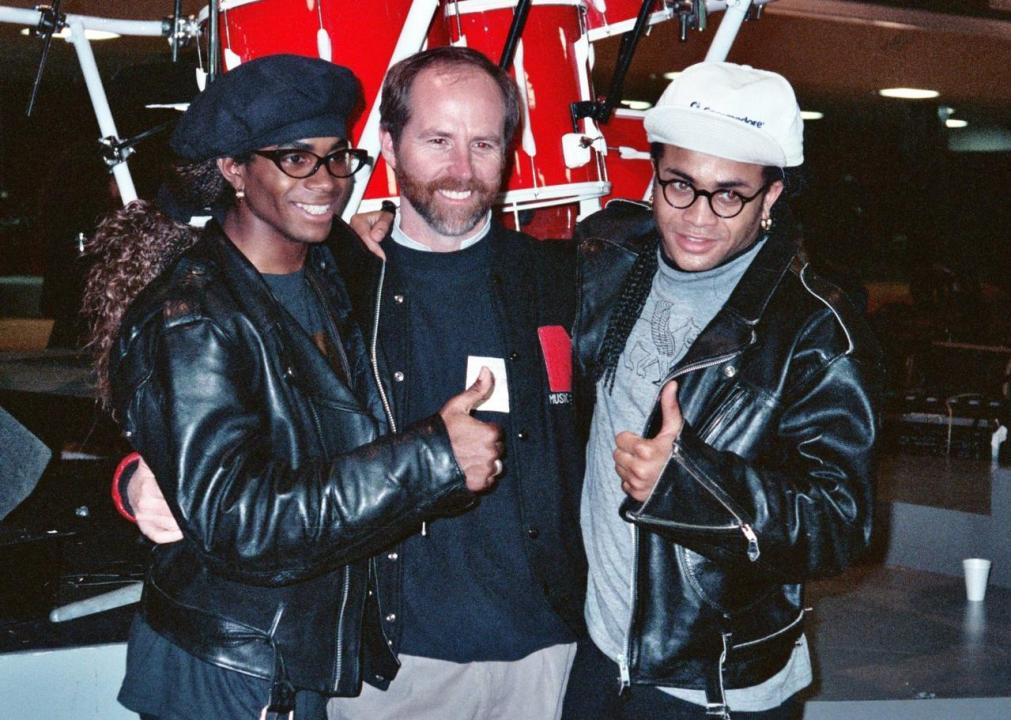 Milli Vanilli was awarded the Best New Artist award in 1990. But when the pop duo admitted that they hadn’t actually sung any of their songs themselves, both on their album or in concert, the Academy stripped them of their award.

The pair became a laughing stock and, despite trying to stage a comeback, could not regain their footing before 32-year-old member Rob Pilatus died from an overdose in 1998. 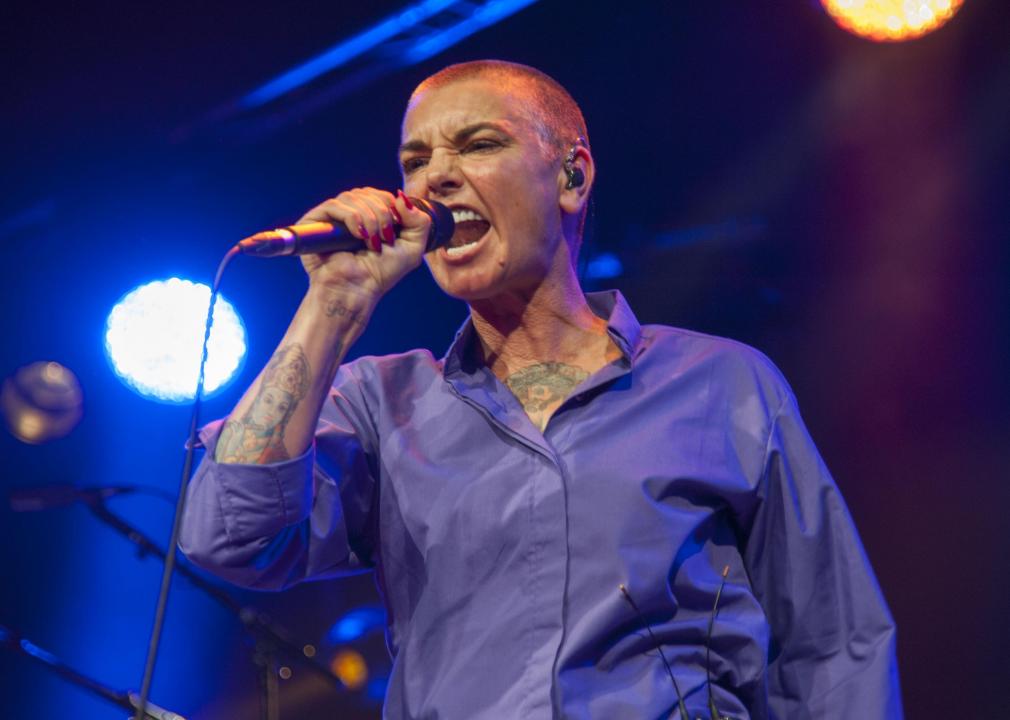 The year was 1991 and Sinéad O’Connor was nominated for Best Female Pop Vocal Performance, Best Alternative Music Performance, and Record of the Year. Though she won the Best Alternative category, she was not there to receive it, as she withdrew herself from the ceremony due to its “false and destructive materialistic values.” 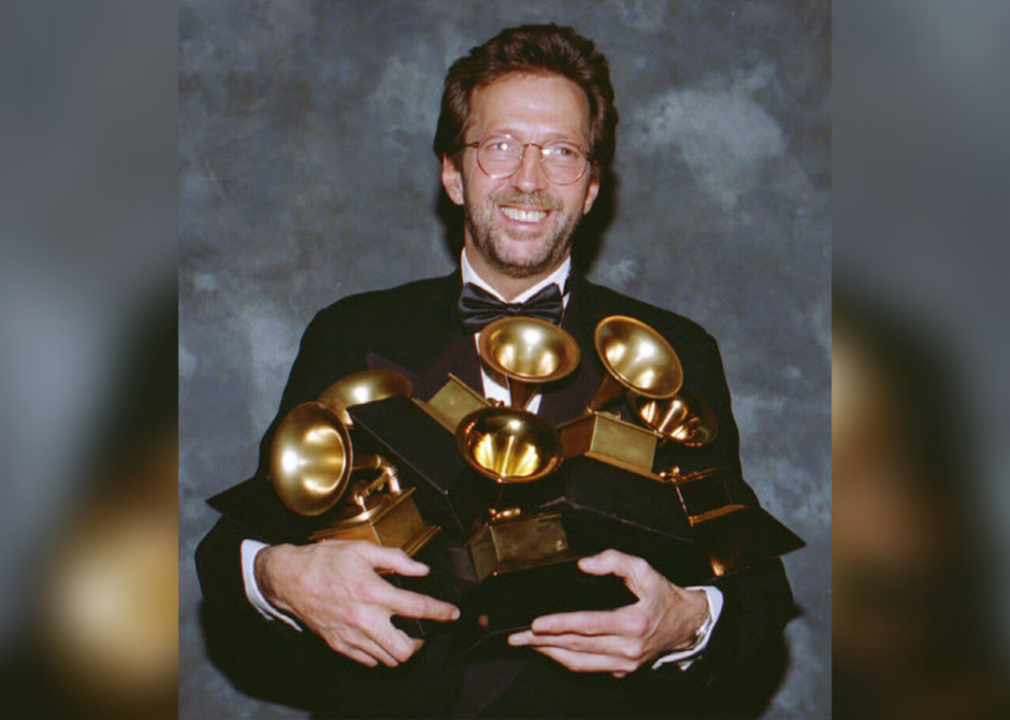 Eric Clapton is an undeniable music legend—as well as the lead guitarist of the aforementioned Cream—and his song, “Layla,” has stood the test of time. However, in 1993, it was an acoustic cover of that song—which, by then, was 20 years old—that beat out Nirvana’s “Smells Like Teen Spirit” for Best Rock Song. Today, “Teen Spirit” is considered a touchstone of the ’90s and among Nirvana’s best works.

You may also like: Best and worst Al Pacino movies 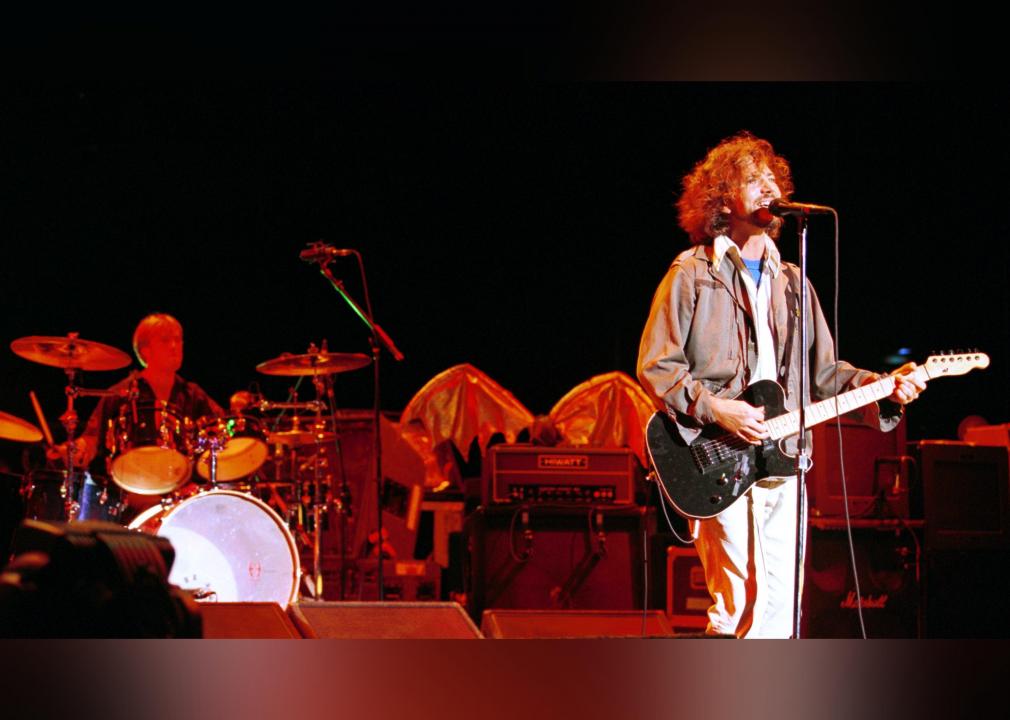 Many artists are ecstatic to win their first Grammy Award, but that was not the case for Pearl Jam’s lead man, Eddie Vedder. When they won Best Rock Performance in 1996, Vedder took the stage to say, “I don’t know what this means. I don’t think it means anything. That’s just how I feel.”

Though his nonchalance confounded some, Pearl Jam went on to achieve great acclaim. In 2000, he dissed the Grammys once again at a 10-year anniversary performance for this band in Las Vegas, thanking his fans and adding, “I would never do this accepting a Grammy or something.” 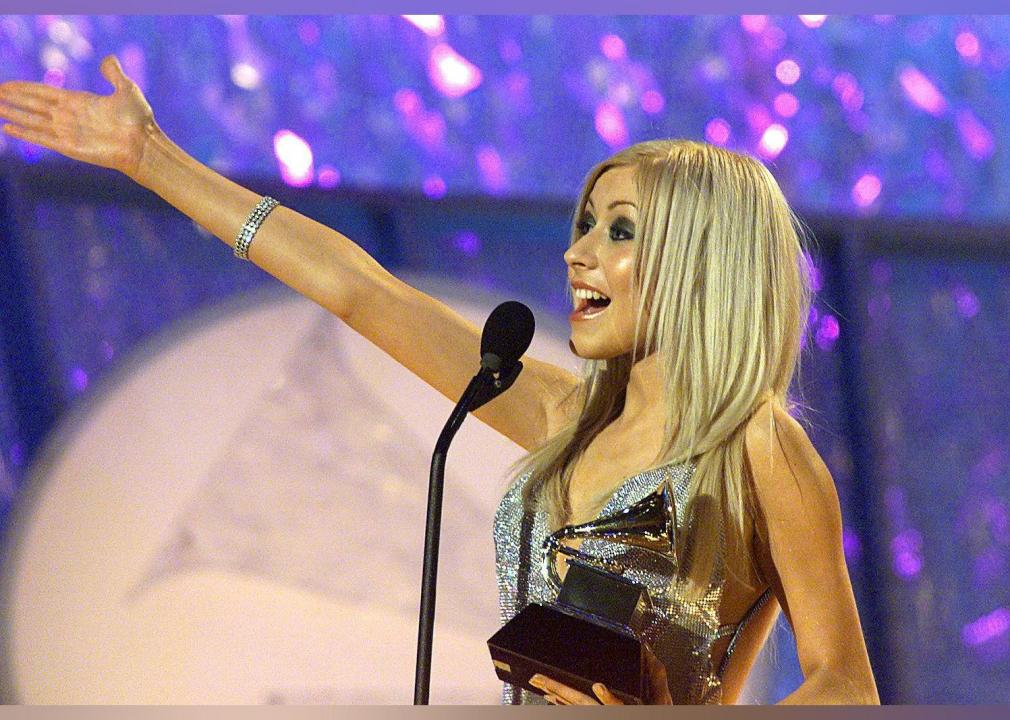 The year? 2000. The question on everyone’s mind: Which pop princess will take Best New Artist, Christina Aguilera or Britney Spears? By night’s end, Aguilera would prevail, signaling a reign that would see the pop star dominating the Grammy Awards for years to come. 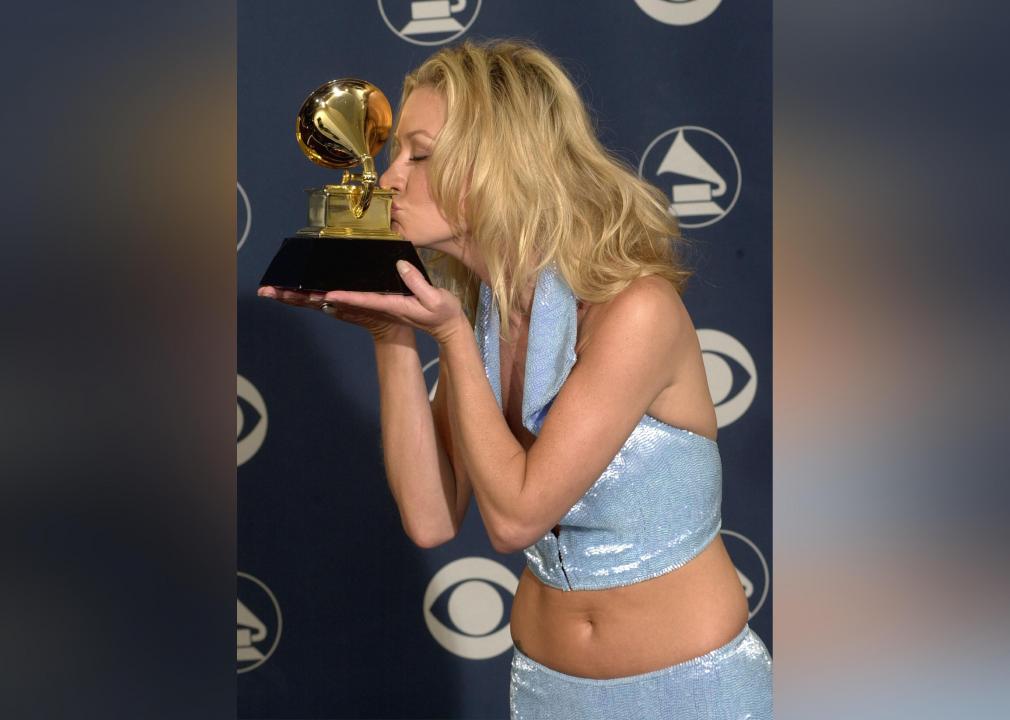 When country singer Shelby Lynn won Best New Artist in 2001, fans felt that maybe it was a tad late for her to be considered a “new” artist. She had already been recording for years. As she joked in her acceptance speech, it took her “13 years and six albums to get here.” Since then, she’s released seven more studio albums and dozens of singles. 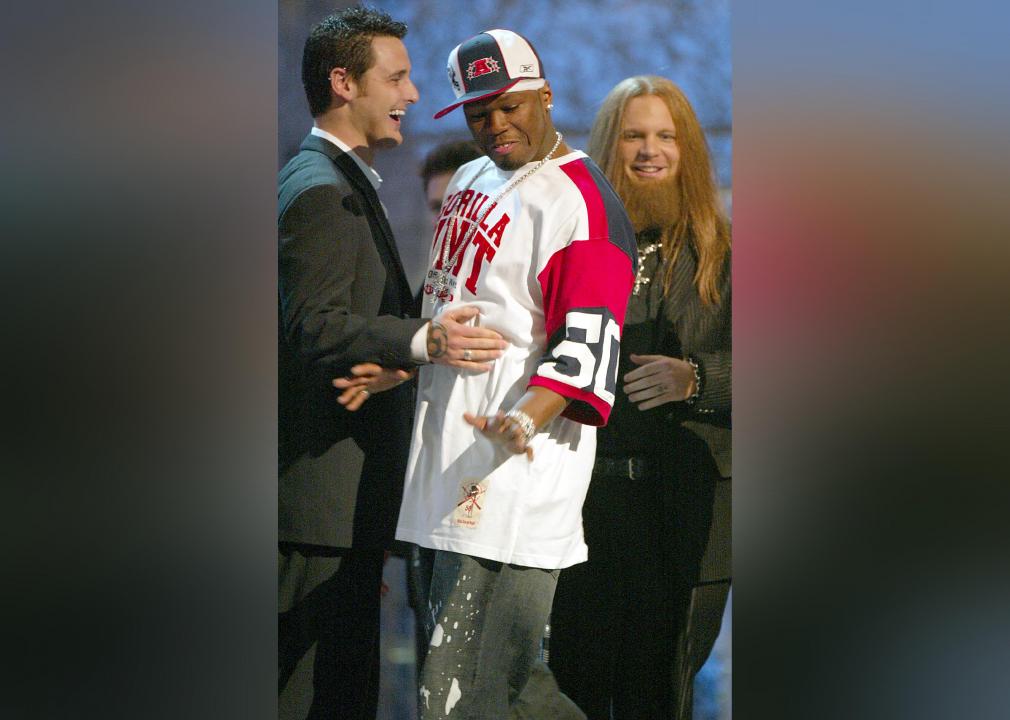 Kanye West famously interrupted Taylor Swift’s Video Music Awards speech in 2009. Perhaps he was inspired by another rapper back in 2004.

When the alternative rock band Evanescence won for Best New Artist and began their speech, 50 Cent, who had also been nominated for the award, jumped on stage and paraded around the band before making his way back to his seat. Evanescence singer Amy Lee took it in stride, joking about it. Today, it’s still considered an oversight that 50 Cent lost, considering he was nominated for five awards that night—and didn’t win any. The 2005 Grammy Awards saw 10 nominations for Kanye West’s “The College Dropout,” the most nominations for any artist there. While West secured three wins, there were two major oversights. First, his defeat by Maroon 5 for Best New Artist. Second, and perhaps most egregiously, his loss to Ray Charles for Album of the Year.

Charles had just died, and the award given to his record “Genius Loves Company” was seen as overly sentimental or misplaced allegiance to the music legend.

You may also like: 30 best episodes of ‘Whose Line Is It Anyway?’ 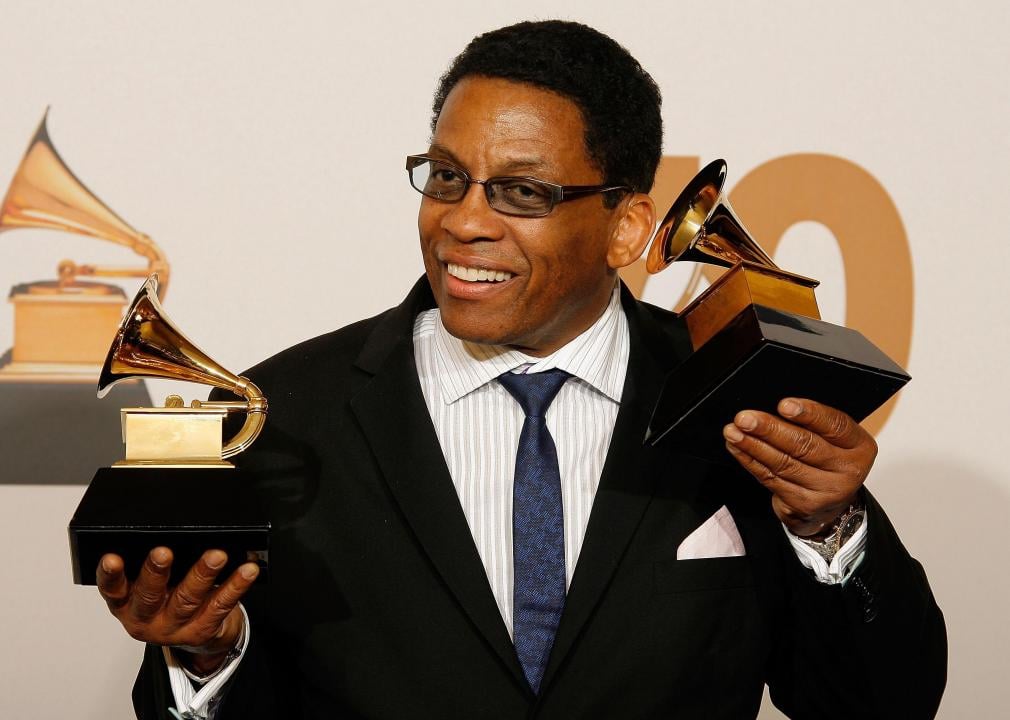 By 2008, Amy Winehouse’s second (and final) studio album “Back to Black” had been out for several years and was considered some of the best material for that year’s Grammy Awards. Winehouse left rehab to perform for the ceremony via satellite and won five awards, including Song of the Year and Best New Artist.

But in a surprise twist, Best Album went to the long-established Herbie Hancock, a jazz artist who had released an album of reimagined Joni Mitchell songs. 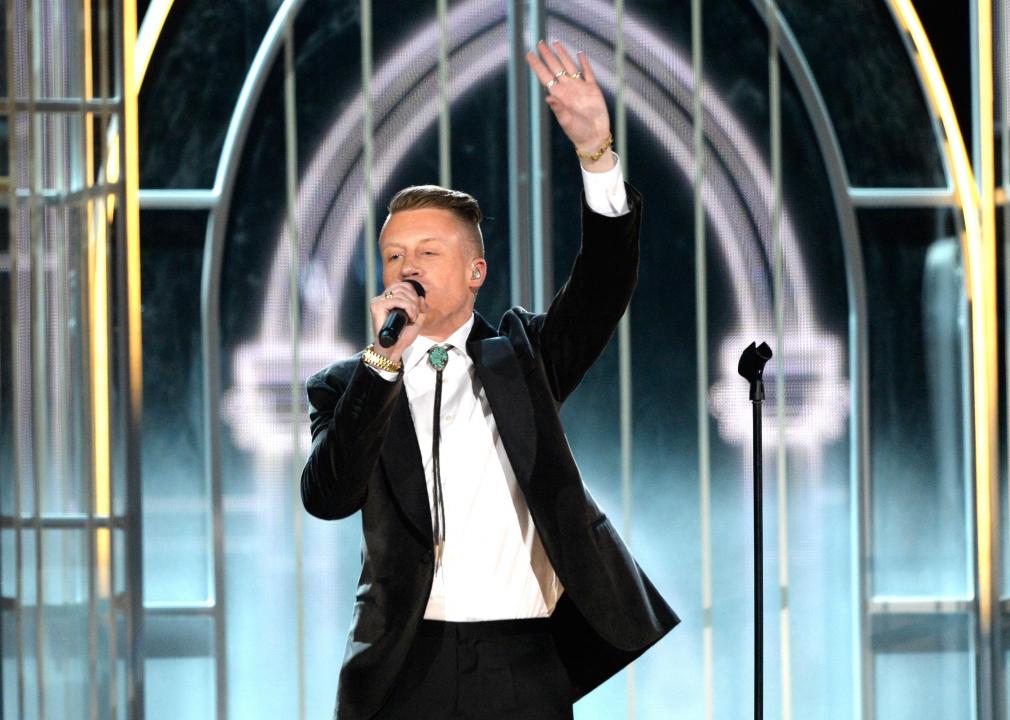 Hip-hop fans were none too happy when Macklemore beat out Kendrick Lamar for Best Rap Album in 2014. They were even more perplexed when Macklemore posted a text exchange with Lamar, wherein he apologized for winning the award he felt Lamar deserved. Was he being honest or pandering to public opinion?

No matter: Lamar went on to win the award at the 2016 ceremony for “To Pimp a Butterfly” and in 2018 for “Damn,” which even won him the Pulitzer Prize for Music. 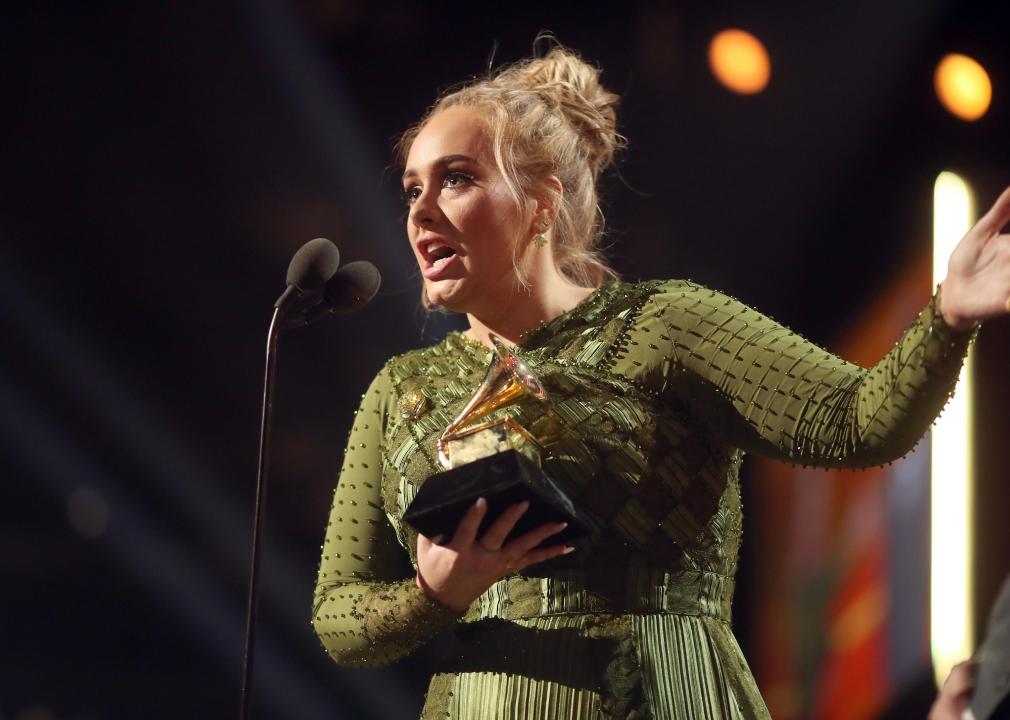 Adele’s reaction to winning the Grammy for Album of the Year in 2017 for “25” wasn’t elation. In fact, she admitted “a little piece of [her] died” when she was announced the winner. On stage, she apologized to Beyoncé, who she said deserved the award for her album “Lemonade.” 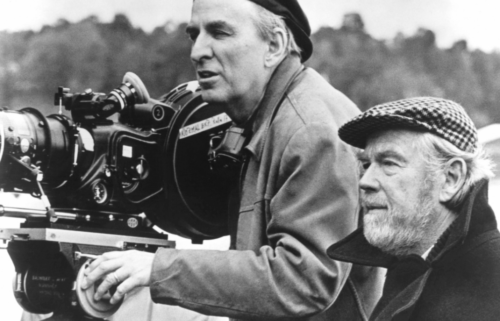 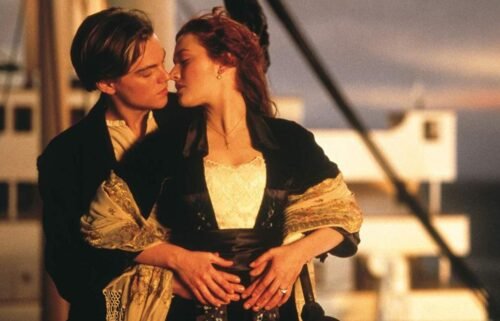 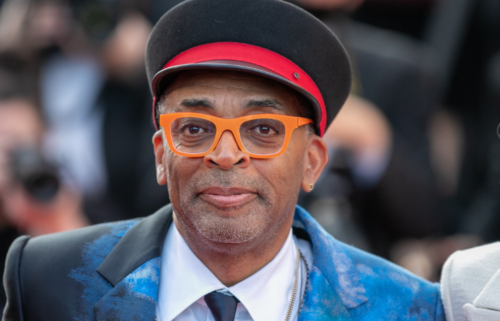 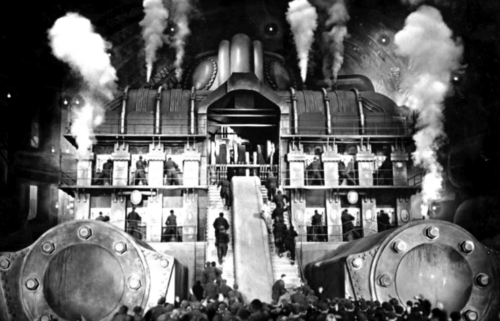