Muñoz Puente spoke to local documentarian Charlie Minn about what she went through.

She was leaving the store when she saw the shooter.

“I only saw his jeans, saw his rifle, and my mind blocked the rest,” Muñoz Puente said.

She said she doesn’t remember what the attacker looked like or his face before she was shot through the leg, the bullet going all the way through. She fell, bleeding from her leg.

“After he shot me I saw him go into the store,” she said.

She lied on the ground in the parking lot, hearing the gunshots going off inside the store. But she wasn't the only victim outside.

She said she kept looking over and staring at a young woman next to her, who had also been shot, but Muñoz Puentes said she couldn’t understand what she was seeing. That woman wouldn't survive.

Minutes later the gunshots slowed down, that's when the shooter came back out.

“When I saw him come out I thought he was going to come back and killed me,” she said, with tears in her eyes.

Months later she’s still healing, still accepting what happened, and with only one message to give the gunman: “I hope God can bless him.”

She said she has forgiven him already.

The interview is from Charlie Minn’s documentary “9-1-5” It's set to open July 30 at Bassett Place. 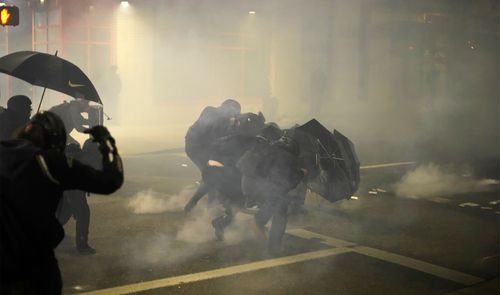