EL PASO, Texas -- The increasing number of migrants seeking asylum at the U.S.-Mexico border can be explained by poverty, violence and climate change, according to U.S. Rep. Veronica Escobar, D-El Paso.

“Until we address this strategically with humanity and with compassion, and with thought about our entire hemisphere, we will be having the same conversation every single year,” Escobar said.

Her comments came Wednesday during an online Texas Tribune event along with McAllen Mayor Jim Darling.

Migrant apprehensions at the border have soared since October, and Border Patrol facilities face overflowing conditions. From October through January, more than 296,000 undocumented immigrants were apprehended.

Meanwhile, the Biden administration projects the number of unaccompanied children crossing the border will increase from more than 16,000 this month to as many as 26,000 in September, according to documents obtained by Axios, and the U.S. Department of Homeland Security says it expects 500,000 to 800,000 migrants to arrive in family groups this year.

On March 6, Texas Gov. Greg Abbott announced he was launching Operation Lone Star to deploy more resources from the Texas Department of Public Safety and the Texas National Guard to the border to secure the area.

Escobar and Darling spoke Wednesday about the approach the Biden Administration will take to the challenges on the border and what more can be done.

Here are the highlights from that conversation. (You can watch it in its entirety in the video player at the top of this article.)

What’s happening on the border?

Darling said McAllen expects to see an increase of migrants in the coming weeks, and that this year brings the additional obstacle of Covid-19 testing and quarantine as necessary.

“That's been a little bit of a challenge but we can handle it; we were ready for it,” Darling said.

Escobar said it is frustrating to see the increasing number of people coming across the border framed as a new issue when people have been arriving for almost a decade needing to escape unlivable situations. She said El Paso has seen individuals, children and families seeking refuge that often have family members already living or working in Texas.

“We have a lot of work to do,” Escobar said. “This is not a challenge that goes away.”

What’s causing the migration to soar on the border?

Escobar said generally, the increase in immigration can be explained by poverty, violence and the climate catastrophe.

Many people are being pushed from land where they lived and farmed for generations because of drought, hurricanes or other calamities, Escobar said. She said the Biden administration should call a hemispheric summit to discuss the issues that are driving the increase in immigration, because they affect everyone.

“We all share an obligation in this hemisphere, and a responsibility to do this together,” Escobar said.

There has also been an increase in asylum seekers specifically from Mexico because of economic instability and violence there, Escobar said.

Darling said people are coming from Mexico because of violence and work opportunities, and when they work in the U.S. and send money back home it helps stabilize the economy here.

What are the federal and state governments doing in response? What else can be done to address the situation?

Darling said the border facilities should have social workers instead of only Department of Public Safety officials who are not trained to take care of children or provide mental health support.

“If you talk to the average border work patrol person, they're miserable, they're not doing what they're supposed to do,” Darling said.

Escobar said the conditions in the border facilities are much more humane than they were several years ago after Congress passed a bill in 2019 to provide the facilities with clothes, toiletries and food. Escobar said two other pieces of legislation — the DREAM Act and the Farm Worker Modernization Act — will also be a step in the right direction for the Biden administration to address the situation.

“The numbers of Central American families fleeing has steadily gone up over the last two years,” Escobar said. “The strategy by the Trump administration has been to push them out, and to basically tell the American public if they're out of sight, out of mind, it's no longer our problem. That did not mean that they stopped arriving, they just became … somebody else's quote unquote problem.”

Darling and Escobar said FEMA stands ready to reimburse the costs associated with addressing the situation, but the governor and the Department of Homeland security blocked the assistance. In early March, the Biden administration sent an offer to Abbott to provide aid specifically focused on testing and quarantining individuals and families. Abbott refused the help, accusing the Biden administration of “releasing immigrants in South Texas that have been exposing Texans to COVID.”

“The governor said, ‘We're not going to reimburse you through FEMA because we think that it just encourages more of this kind of people coming over seeking asylum,’” Darling said. The governor said it should be the federal government’s responsibility to fund Covid-19 testing and quarantine efforts. 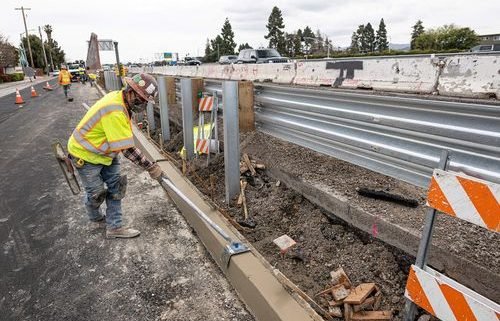