The month of September is Childhood Cancer Awareness Month. It’s a time to recognize the children and families affected by childhood cancers.

Back in May ABC-7 introduced you to 5-year-old Stevie Lerma, who was diagnosed with brain cancer.

In May, two El Paso youth football teams helped Stevie’s wish to score a touchdown come true when they invited him to be on their team.

Since then, little Stevie has been in and out of a hospital for chemo treatments.

Stevie and his family had to travel to San Antonio for his final chemo treatment which was the most intense one of all.

“Because in order to save a child’s life after that treatment they need a stem cell transplant, which El Paso doesn’t do, so after his last chemo treatment and transplant he was able to ring the bell which the doctor explained was a big deal cause he made it through this far,” said Crystal Lerma, Stevie’s mom.

After the treatment and a stem cell transplant, little Stevie was able to come back home and ring the cancer bell, but he wanted to celebrate this milestone with his whole family, so he invited all of them to ring the bell along with him.

Stevie was joined by hospital staff and even a few superheroes were there as he and his family joyfully rang the cancer bell together to celebrate his final chemo treatment.

“He is still in treatment and we are waiting to go out of town again for only radiation (six weeks long) and after that we come back to El Paso and we get to celebrate again with everyone and ring the bell here with his oncologist for his overall treatment,” Crystal Lerma said.

But that’s not the only milestone for Stevie.

After being homeschooled while he recovered from his stem transplant, Stevie was able to go back to school this semester to attend kindergarten. 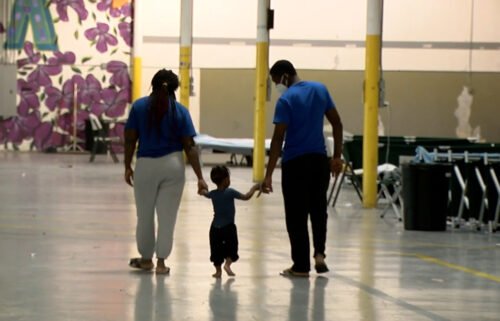