The Active Attack Integrated Response (AAIR) course, recently implemented by the ALERRT Center at Texas State University, is being taught to several agencies in the Borderland.

What makes the course unique is the integration of fire, EMS and dispatch with law enforcement during active shooter response scenarios.

"We typically don't train together as often as we should," Martin Oviedo, an ALERRT adjunct instructor, said.

The training is designed to bridge a gap and create better communication between all agencies.

"Our imagination can be our worst enemy," Adriana Guillen, a public safety shift supervisor with the City of El Paso's 911 Communications Center, said. "We really have no closure. We just go by what we hear and seeing how [law enforcement] train, seeing what they need can also help us."

"Sometimes I think [law enforcement] takes for granted what the communications people go through," Texas State Trooper Mark Jackson said after going through several simulations. "We're just trying to get a more broad understanding of what their role is when they show up."

The training also highlights just how key the communication is for first responders.

"It's like the glue that keeps the team together," Oviedo said. "When you have separate entities working on the same location for a same tragic event, that can be very frustrating, confusing and chaotic."

Bringing fire/EMS into a 'warm' zone

The training runs through several scenarios with a focus on the Rescue Task Force (RTF).

"The Rescue Task Force will bring in fire and EMS into a warm zone," Oviedo said. "We have police inside and we've secured the area, the room that's been affected. We're now slowly trying to coordinate resources."

The RTF is carefully escorted into the warm zone by law enforcement to the victims to perform immediate life-saving medical care before a rapid evacuation to a trauma center.

Prior to this training it was more common to allow paramedics on scene once the threat had been completely eliminated.

The first simulation created an immediate flashback to the August 3 mass shooting.

Guillen, who played a key role from the dispatch communications center that day, says she texted a family member right after the first scenario.

"It was horrible," Guillen said. "But as we continued it was a lot better."

"To hear that from a student really puts into perspective what we're doing," Oviedo said. "It's very eye-opening to understand that they may be experiencing some of the things in a real world event, which is in essence what we're trying to recreate." 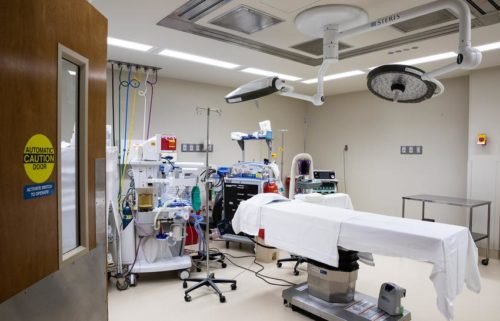