“Nine months into this there is no clear direction. I support the governor, I just think that between her and I there is just an enormous disconnect. If nothing else, maybe she can hear that today,” said Sheriff Kim Stewart.

New Mexico State Police is the agency that is specifically responsible under state law with enforcing penalties for violators of the governor's directives.

But Stewart told ABC-7 that when she and her deputies try to call NMSP to consult with them and relay reports of violations, the Sheriff's Office gets referred to an email address that usually takes two days to receive a response.

Stewart complained that as a result of the lack of communication, “we have no clear direction, we have no clear mandate. I'm not pointing fingers or saying it's anyone's fault. I'm just here to tell you that as of today after nine months or whatever it has been we are in the same murky marshland as we have been since the start.”

The top cop in the Dona Ana County said she has come to the conclusion that there "is a grave disconnect between [the governor's] words and my actions. I don't have the authority to do or to enforce these issues. I simply have no authority.” 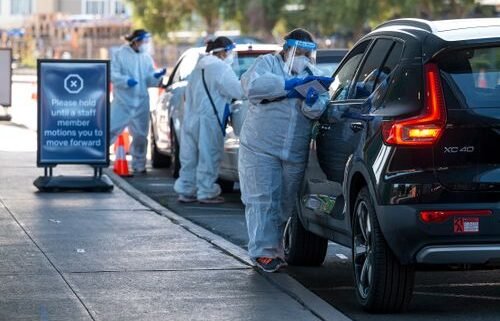