A white supremacist group filmed a video in front of the Emmett Till Memorial in Sumner, Mississippi, over the weekend, officials say.

A security camera video posted on the Sumner Courthouse and Emmett Till Interpretive Center’s Facebook page shows seven people standing in front of the sign Saturday, while some of them film.

“We are all here are the Emmett Till monument that represents the civil rights movement for blacks,” a man is heard saying. “What we want to know is where are all of the white people.”

The memorial sign marks the spot where 14-year-old Emmett Till’s body was pulled from the Tallahatchie River in 1955. The young African American was tortured and killed by two white men after he was accused of flirting with a white woman. His death made international news and was an important catalyst in the civil rights movement.

Two of the people in Saturday’s video are seen holding flags which are associated with the group “League of the South,” Dave Tell, a historical consultant for the center, told CNN.

“League of the South” has been designated as a hate group by the Southern Poverty Law Center, which says group members believe “a ‘godly’ nation would be run by an ‘Anglo-Celtic’ elite that “would establish a Christian theocratic state and politically dominate black people and other minorities.”

An alarm near the sign goes off, additional surveillance footage showed, and prompts the group to run and leave the site.

The alarm goes off for all visitors so they know the area is being monitored, the executive director of the Emmett Till Memorial Commission, Patrick Weems, told CNN.

The Emmett Till Memorial was recently rededicated and made bulletproof after multiple acts of vandalism — including getting riddled with 20 bullet holes.

The original sign went up in 2007. A year later, it was stolen and no arrests were made.

When it was replaced, it was shot at. Last year, a third sign was put up at the site, but just over a month later it was vandalized again.

In July, a photo surfaced showing three white University of Mississippi students posing with guns in front of the memorial which seemed to be damaged by bullet holes. It’s unclear whether the students were connected to those holes.

The photo prompted their fraternity, Kappa Alpha, to suspend them and the Justice Department’s Civil Rights Division to launch an investigation.

“These memory sites are becoming where we work out our racial politics,” Tell told CNN.

The sign used to be a pilgrimage site for people to honor the Civil Rights Movement, he says. Now, it’s become a target for hate groups to make a statement. 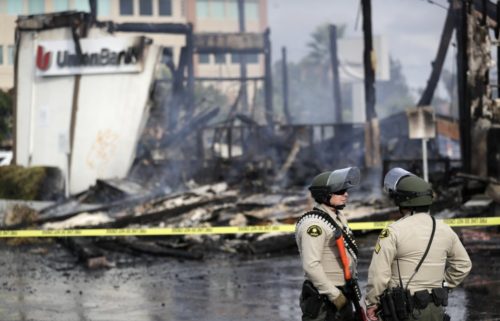