The process of impeachment isn’t a criminal or a civil case in the courts, but a political case in Congress. That means Thursday’s vote in the House to authorize rules for the impeachment inquiry is an important barometer for how the country feels about the process. Here are the details on that vote, along with other news.

The vote fell almost entirely along party lines. It was 232-196. Four lawmakers didn’t vote. Two Democrats voted no and one former Republican — independent Justin Amash of Michigan, who was run out of the party over his support for impeachment — voted with Democrats.

Which Democrats voted no?

Reps. Jeff Van Drew of New Jersey and Collin Peterson of Minnesota opposed the rest of their party.

Van Drew said he believes the inquiry will “further divide the country” without bipartisan support.

Peterson called the House vote on the resolution “unnecessary” and said he “will not make a decision on impeachment until all the facts have been presented.”

Both of their districts are more heavily Republican than the rest of the country, according to 538, and both voted for Trump in 2016, according to a database maintained by the liberal site Daily Kos. Other Democrats in similar districts fell in line with the party movement to impeach.

The danger for Democrats in impeachment

And that’s a good reminder to Democrats that they hold the majority because of historic turnout in 2018 and also because they flipped districts that used to be held by Republicans and voted for President Donald Trump in 2016.

The great danger of the impeachment effort for Democrats is that it turns voters in those key districts against them.

CNN’s Miguel Marquez spent time in Pennsylvania talking to voters and found, generally, that Democrats want to impeach and Republicans don’t. He found even Democrats who wonder if it’s a waste of time.

Is this worth it?

Scott Jennings, a former aide to Senate Majority Leader Mitch McConnell, puts it very well: “Let me skip to the end: The Democratic-majority US House of Representatives, in partisan fashion, is all but certain to impeach President Donald Trump. The Republican-majority Senate, in partisan fashion, will almost certainly acquit him.”

The danger for Democrats in not impeaching

The counter-argument is that there’s an equal or greater danger in not holding Trump to account. It’s certainly a debate Democrats are having in real time as they move toward impeaching the President.

Why did Democrats change strategy and hold this vote?

Chris Cillizza has a nice piece explaining why Democrats went from not holding a vote to Thursday’s historic move. It boils down to two words: public opinion.

He writes: “What’s become clear over the past 10 days or so … is that the current closed-door approach to the investigation could jeopardize the rising public support for impeachment.”

Tim Morrison, the top Russia and Europe adviser on the National Security Council, told House impeachment investigators that he was advised by then-White House official Fiona Hill to stay away from the parallel Ukraine policy being pursued by Trump’s personal attorney Rudy Giuliani, according to a source familiar with his testimony Thursday.

More from descriptions of Morrison’s testimony

Keep track of all the testimony

There were two court hearings Thursday on whether the courts can force witnesses close to Trump to testify in the House’s impeachment inquiry.

The first concerns former White House counsel Don McGahn, who the White House says is immune from having to testify.

Judge Ketanji Brown Jackson expressed disbelief that the White House could control what its former officials might talk about, when they’re subpoenaed by the House or otherwise.

Kupperman’s lawsuit asks the courts whether he should heed a House subpoena or a White House claim of immunity.

As arguments continued down the hall at the Washington federal courthouse over McGahn, a lawyer for the House said Kupperman’s lawsuit “serves no other purpose than to attempt to delay.”

The judge set a hearing in Kupperman’s case for December 10, priming major questions in the case to be resolved by January.

After hearing criticism that it isn’t paying enough attention to Trump’s defenders in the House, the White House has stepped up its outreach to Senate Republicans — a trial there would be next if the House votes to impeach the President. A handful of GOP senators were invited over for a meeting with Trump hours after the House resolution vote.

The President has invited foreign powers to interfere in the US presidential election.

Democrats want to impeach him for it.

It is a crossroads for the American system of government as the President tries to change what’s acceptable for US politicians. This newsletter will focus on this consequential moment in US history. 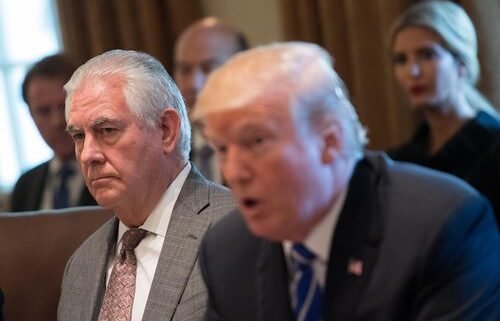