Immigration courts, which fall under the U.S. Justice Department and decide whether to deport immigrants, have been bogged down over the years as more cases are added to the docket that can be addressed at any given time.

“If nothing else, the continuing rise of the backlog shows that the immigration court is broken,” said Judge Ashley Tabaddor, president of the National Association of Immigration Judges. “Until we fix the design defect of having a court in a law enforcement agency, we will not be able to address the backlog in a fair and effective manner.”

President Donald Trump has repeatedly criticized the nation’s immigration system, specifically taking issue with the practice of releasing immigrants while they await their court dates. To remedy that, his administration has sought to hire more immigration judges in the hopes of unclogging the court. Even so, the number of cases has continued to tick upward.

During the last partial government shutdown, for example, the only cases that moved forward were those of immigrants in detention. All others were postponed.

In January, the Transactional Records Access Clearinghouse estimated that more than 42,000 immigration court hearings had been canceled as a result of the shutdown — exacerbating an issue Trump had pledged to resolve.

“The latest case-by-case court records through the end of August 2019 show the court’s active case backlog was 1,007,155,” according to the clearinghouse’s report released Wednesday. “If the additional 322,535 cases which the court says are pending but have not been placed on the active caseload rolls are added, then the backlog now tops 1.3 million.”

While a Justice Department spokesman said in a statement that the department “does not certify data from third parties,” the spokesman added: “This report and DOJ’s own data further confirms there is a crisis at the border. This Administration is taking aggressive steps to increase productivity, close loopholes, and hire a record number of judges to address the backlog with our existing authorities.”

While the clearinghouse doesn’t attribute the backlog to any one factor, the American Bar Association has previously proposed a major overhaul of the US immigration system, calling the courts “irredeemably dysfunctional.”

“The state of the U.S. immigration court system has worsened considerably since our 2010 Report,” that March report noted, mentioning an unprecedented backlog of cases, increased wait times, policy changes that aim to accelerate cases without allocating enough funding, overreliance on video teleconferencing during court proceedings and possible bias in the hiring of judges.

The Justice Department had previously addressed some of the issues the bar association report raised.

The administration has acknowledged the massive immigration court backlog and has, at times, placed blame on unfounded asylum claims, which have to work their way through their court system.

This month, the administration opened tent courts along the Texas border to hear the cases of migrants who have been returned to Mexico to await their immigration proceedings as part of the Migrant Protection Protocols program. Around 42,000 migrants have been sent back under the program.

In Wednesday’s report, the Transactional Records Access Clearinghouse notes that the Migrant Protection Protocols cases still make up a small share of the court’s active backlog. 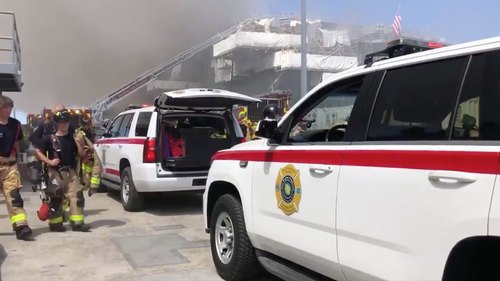