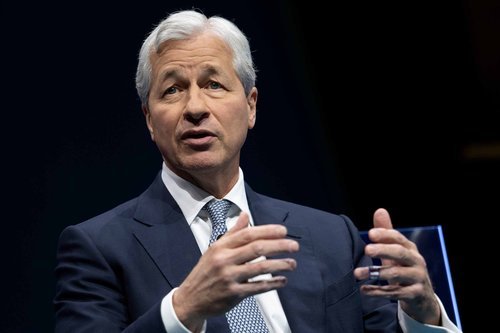 Consumers are still spending, according to JPMorgan Chase CEO Jamie Dimon. But Dimon added that the US trade war with China is weighing on corporate sentiment.

During a conference call with reporters after the bank’s third quarter earnings release Tuesday, Dimon said that geopolitics are reducing confidence, but that the US consumer is doing fine. He added that it’s too soon to say if trade tensions will eventually lead to a recession.

The bank reported revenue of $29.3 billion in the third quarter and a profit of $9.1 billion. Both sales and earnings rose 8% from a year ago and topped Wall Street’s forecasts. Shares of JPMorgan Chase rose 2% in early trading on the news.

The trade war with China also doesn’t appear to be jeopardizing JPMorgan Chase’s plans to take a controlling stake in China International Fund Management (CIFM), an asset management business that the bank currently owns 49% of, either.

JPMorgan won an auction in August for an additional 2% interest in CIFM. The purchase still needs to be approved by US and China regulators. Dimon said Tuesday that he’s still confident a deal will get done — despite lingering trade war worries. But he conceded that anything can change as US-China trade negotiations continue.

The bank also benefited from a boom in bond trading revenue during the quarter, as well as strong growth in its investment banking business due to an uptick in stock and debt underwriting fees.

But there are growing concerns about how the bank may fare if the market for new stock offerings continues to slow down in the wake of the botched WeWork IPO. JPMorgan Chase was the lead underwriter for the co-working company, which has put its stock sale on hold amid concerns about its financial health and corporate governance.

Chief financial officer Jennifer Piepszak said during the conference call that there were some notable initial public offering disappointments in recent months, but would not comment specifically when asked about WeWork.

Still, it appears that as long as consumers are taking out more loans, JPMorgan Chase’s overall results may hold up well no matter what happens with the IPO market.

JPMorgan Chase’s healthy results are in stark contrast to more disappointing earnings from rivals Citigroup, Wells Fargo and Goldman Sachs, which also reported earnings Tuesday morning. Shares of those three banks all fell in early trading but have rebounded to their previous levels.

But the broader market was in rally mode Tuesday, thanks in part to the solid results from JPMorgan Chase, which is a member of the Dow.