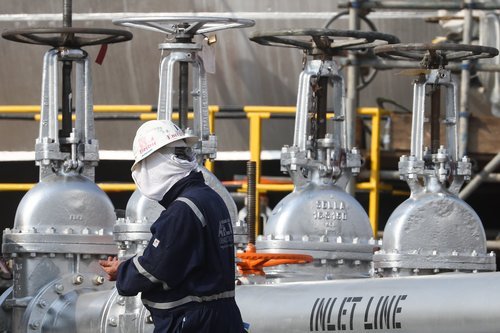 Saudi Aramco is trying to pull off a monster IPO that will be a major rainmaker for Wall Street. But environmental groups are urging big banks to help save the planet by refusing to work on the lucrative deal.

In a letter to Goldman Sachs, JPMorgan Chase and other leading investment banks, the environmental activists warned that the long-delayed IPO will enable Aramco, the crown jewel of Saudi Arabia, to raise billions of dollars that will be used to worsen the climate crisis.

“The world is watching — and the more bank financing of fossil fuels increases, the more public outrage will grow,” the Sierra Club, Rainforest Action Network, Friends of the Earth and other activist groups wrote.

The letter was sent on Thursday, hours before news that Aramco once again delayed the IPO to give investors more time to understand the impact of the September attacks on its oil facilities.

Wall Street firms are highly unlikely to heed the call to cut ties with Aramco. The IPO, which could raise a record-shattering $40 billion, would bring in fat fees and coveted bragging rights for investment banks.

Still, the strong criticism from environmental groups is yet another obstacle facing Aramco’s IPO. Aramco and its bankers have also had to navigate an unprecedented September attack on the state-owned company’s infrastructure and deep skepticism among investors and analysts about the lofty valuation being targeted. And some investors are hesitant to plow more money into fossil fuels. That’s why Singapore’s Temasek Holdings decided against investing in the Aramco IPO, according to The Wall Street Journal.

None of the banks would comment to CNN Business on the letter.

Saudi Aramco said that it had invested heavily over decades in reducing emissions from its operations.

“We are an industry leader in developing and deploying emissions-reducing technologies, partnering with public and private institutions around the world,” it said in a statement. “In order to achieve a low-carbon future, we believe it is necessary to meet both global energy demand and lower emissions. That must include responsible investments which reduce the overall carbon footprint of the oil and gas industry and end-use markets.”

The timing of the Aramco IPO remains in question. Although the company was expected to release its prospectus next week, a source told CNN Business that the timing for the blockbuster listing was pushed back to allow time to publish quarterly results that will provide clarity on the impact of last month’s attacks.

A delay would call into question the plan to list Aramco in Saudi Arabia next month. The listing is the centerpiece of the kingdom’s Vision 2030 plan to diversify the economy away from its dependence on oil.

But the environmental groups warned Wall Street banks on Thursday that the Aramco IPO would mark the biggest single infusion of capital into the fossil fuel industry since at least the Paris climate agreement was reached in late 2015. It would also give serious financial firepower to Aramco, which the Guardian recently listed as the world’s largest corporate emitter of carbon dioxide.

Enabling Aramco to extract its oil reserves in the coming decades is a “recipe for financing the destruction of the planet,” the letter said, noting that UN climate scientists have warned global emissions must start dropping sharply to prevent “catastrophic consequences.”

The environmental groups suggested it would be hypocritical for big banks to underwrite Aramco’s IPO while at the same time having policies about respecting human rights and expressing concern about climate change.

“It will be clear that your words of environmental and social concern are devoid of all sincerity,” the letter said, “and that when push comes to shove your concerns for short term profit outweigh all else.”