While the coronavirus pandemic has isolated family and friends inside their homes, it has in many cases increased online or over-the-phone communication with loved ones. For instance, that my family's iMessage group chain has never been busier. Relatives are checking up on each other, sharing updates, and providing some much-needed comic relief.

But, in some cases, relatives and friends share poor information -- whether it is bad science related to how to prevent the virus, debunked rumors about cities being put on lockdown, or conspiracy theories about the origins of Covid-19. While any strain of misinformation is not ideal, misinformation related to a public health crisis has an especially dangerous element to it.

NYT's Rukmini Callimachi put it this way earlier in the week: "I admit that it was mildly amusing when family members, who don't understand where to get verified news, fell for wacko conspiracies. Like the idea 9/11 was an inside job or that the moon landing was fake. We're now at a point where misinformation may cost [people] their lives."

Indeed, bad information during a public health emergency poses a risk to those who fall victim to it. So you will likely have the urge and feel the responsibility to correct it. But it can be incredibly awkward to correct misinformation or debunk conspiracy theories when it is being shared by a relative or good friend. So what's the best approach to take? Some experts gave their advice...

Before taking any action, it is important to remember that most people have no intention of sharing bad information. In fact, most people want to do the exact opposite of that. "The research," MIT professor David Rand, who studies misinformation, said, "suggests that people really do want to share only accurate information. ... The people on your family group chain, most social media users want to only be sharing stuff that's accurate."

So why do people share bad information? They might not know better, and the type of content circulating during a health emergency might make them less judicious, Rand said: "There's evidence that more emotionally evocative content makes people less discerning. In particular, when people rely on intuition and emotion they are more likely to believe false claims. Statements, for example, that are scary make people less inclined to stop and think about it."

"The first step is to have a sense of empathy," BuzzFeed reporter Craig Silverman, who has reported on false news for years, said. Silverman noted that people are sharing information because they care and are either trying to help or feel like they are part of a larger conversation. "People, especially family and friends in group chats," he noted, "they are not trying to be malicious."

Emily Vraga, a professor at the University of Minnesota who studies health misinformation, said that research she has conducted has indicated that a blunt factual correction is "equally as effective" as one in which the person takes a more empathetic approach. "So I think using that affirmative empathetic tone is better because the correction still works and it doesn't make [the person you're correcting] feel thrown under the bus," she said.

Another thing to keep in mind is the source you are using to correct the misinformation. For instance, your Trump-supporting uncle might be less inclined to believe outlets he perceives as critical of the President. "If it comes from a news outlet they don't like, they're not going to respond well," Silverman pointed out, suggesting people consider citing sources like the CDC.

Because some people might be skeptical of even the federal government, Vraga recommended citing local sources. That could include the state or city health department, or local media outlets that might appear more credible to the person you are trying to communicate with.

Rand said research indicates that people "are more receptive to corrections that come from their friends and family compared to random people." That said, he noted you "want to use language that communicates you are trying to be helpful" and not confrontational.

Silverman suggested if you have a family member or friend who has shared bad information that it might be better to reach out privately. "Maybe send them a message and say, 'Hey, I noticed you just posted this. I have seen some information that seems to contradict this.' Think about how you can take it one-on-one in a personal way and provide them information from a source they are likely to trust."

Rand emphasized that his research indicated that "when people stop and think about things, they are actually very good at telling what is true and what is not true, but just not in terms of what they share." Rand added, "If you just nudge people to think a little more about accuracy, it can have a real impact."

Rand's point was that it can be beneficial to focus on helping take preventative measures, instead of repeatedly dealing with debunking. He called it "pre-bunking." So how do you do it? "Find some true pieces of information," Rand advised. "Then say, 'Hey, I found this from the World Health Organization. What do you think?' And then people will read that and it will get them to think about accuracy and sources."

You have a responsibility

And Vraga acknowledged it is not always easy to correct close family or friends. "These are relationships we care about, people whose good opinion we want to maintain and carry forward," Vraga said. But she said, "It's a way of looking out for each other, and it can be uncomfortable in the moment, but hopefully in the long-run it's doing more good than harm."

Reminder: Some Americans "still think this is a media hoax"

WIRED writer Garrett Graff, who recently published an oral history of 9/11, is working on a week-by-week "Covid Spring" oral history for WIRED. The first two installments are out now. Graff said he was struck by "the number of people" who took Trump seriously when the president was "downplaying this threat for the first chunk of this year." Even now, he said, some people "still think this is a media hoax that is playing out..." 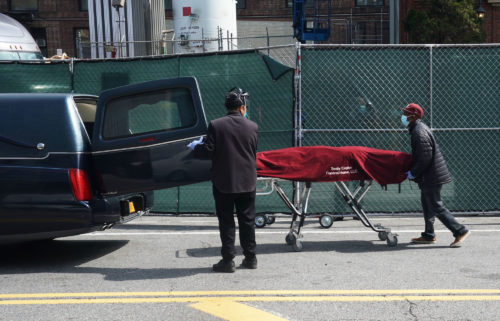