EL PASO, Texas - The makeshift memorial that once stood near the Walmart store at Cielo Vista is no longer there.

The city of El Paso on Tuesday removed the items honoring the victims of the Aug. 3 mass shooting in an attempt at archiving and cataloging them for historical purposes.

"It's quite surprising," said Miriah Soliz, a lawyer with the Ammons Law firm. Ammons Law firm is based out of Houston and represents several of the shooting victims.

"When I came to the memorial that I've come to before that was filled up with bears, crosses, photos and memories and now it has been completely wiped clean," said Soliz. "This is the area where most families would come to light a candle or remember their loved ones, and now it's been completely cleaned out. It's just very surprising."

Although the clean up came as a surprise to Soliz and others who visited the memorial site Tuesday, some of the families of the victims were informed about the cleanup ahead of time.

Ben Fyffe, assistant director for the City of El Paso's Museum and Cultural Affairs, said that the multi-phased process of archiving and cataloging the memorial items began Monday when families of the victims were allowed private access to the memorial to take items they felt were significant to them.

The next phase began Tuesday morning when 30 El Paso museum staff members and 50 professional movers boxed up the remaining items to take them to two different locations.

A small portion of the items went to what is now the temporary memorial site located at Ponder Park.

Fyffe explained that his staff decided which items would be placed at the temporary memorial site by figuring out which items were in stable enough condition to withstand being outside for a number of more months.

"We also thought about the idea of having a variety of different items. We want to give the community a sense of what the larger memorial was like. So we didn't just take banners, it was a variety of things including fake flowers, flags, and some of the homemade items," said Fyffe.

The items that were not taken to the temporary memorial site in Ponder Park were taken to a secure location where they will be spending the next 6 to 9 months to see how stable they are for potential archiving and exhibition later on.

The city of El Paso developed the process for this move after consulting with experts from other communities that were impacted by similar acts of violence. 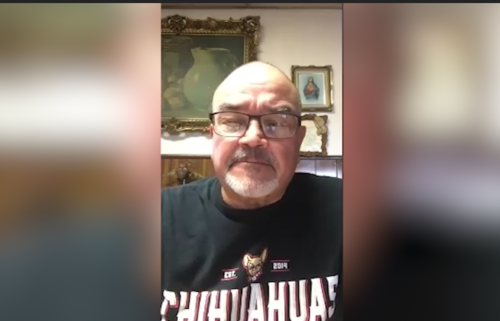