Iran struggled to explain a fire that tore through the Iranian Natanz nuclear complex on Thursday morning, causing major damage to a site that has been key to the country’s uranium enrichment program.

The Atomic Energy Organization of Iran (AEOI) shared an image of the damaged building, which appeared to show a roof charred by fire, broken doors and blown out windows.

The heat signature from the fire appears to have been captured by the NOAA-20 satellite, operated by the National Oceanic and Atmospheric Administration ​(NOAA). The fire was detected in the northwestern corner of the facility at around 2:06 a.m. local time early Thursday morning, according to data obtained by CNN from the satellite.

No casualties were reported at the facility in Iran’s Isfahan Province, south of the capital Tehran, according to semi-official news agency Tasnim.

The incident is under investigation, according to state media Press TV, which cited an anonymous Iranian security official as saying that there was “no evidence” of sabotage.

The country’s Supreme National Security Council said on Friday that the “main cause” of the incident had been determined and will be announced at an appropriate time, its spokesman Keyvan Khosravi said according to Press TV.

Khosravi said that Iranian experts started investigating “different hypotheses” about the incident immediately after it happened, adding that “due to some security considerations, the cause and manner of this incident will be announced at a proper time.”

“The damage to one of the sheds under construction at the Natanz complex was limited,” the Iranian security official said. “Investigators did not find any nuclear material at the building,” he added.

Questions are swirling in the international community about the incident, which comes just a week after a major explosion on the outskirts of Tehran, near the town of Parchin and a military facility.

The BBC’s Persian service reported receiving an oddly worded statement from a previously unknown group calling themselves “Cheetahs of the Homeland,” who claimed they were behind the explosion without providing evidence.

Ramazanali Ferdowsi, the governor of Natanz, said the fire only damaged a building under construction within the complex, and did not affect the main area of the nuclear facility, Tasnim reported.

The incident has not disrupted ongoing activities at the site, said a spokesman for AEOI, Behrouz Kamalvandi, according to IRNA.

“Expert teams from the AEOI have been deployed to investigate the factors leading to the damage of the pre-fabricated steel framework,” Kamalvandi said.

He told Press TV that the incident had not caused any “stoppage” of enrichment work at the facility, which is “mostly done underground.”

He also rejected the possibility that the incident could have led to possible radioactive contamination. “Contrary to the false propaganda by enemy and counterrevolutionary media, no contamination has occurred because there has been no nuclear material in this shed,” he told Press TV.

The global nuclear watchdog, the International Atomic Energy Agency (IAEA), said it was “aware of the reported incident” in Natanz in a Twitter post on Thursday, adding that it “is in contact with the relevant safeguards authorities in Iran to confirm that the agency is able to continue all its safeguards verification activities at Natanz.” 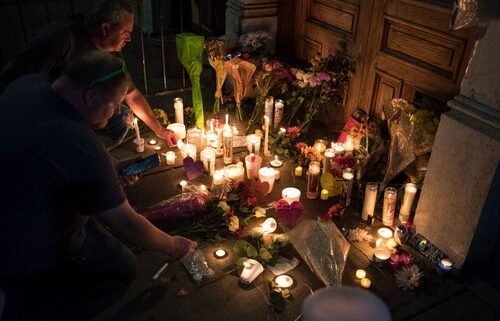