President Donald Trump said at a press conference in Davos, Switzerland, on Wednesday that he opposed the impeachment of President Bill Clinton even though Clinton was doing bad things, like lying.

That is itself not true.

Trump has been serially dishonest about impeachment and about Ukraine. Case in point — he made at least 14 false claims related to these subjects at the Davos press conference and in interviews that aired Wednesday on CNBC and Fox Business — plus a bunch of false claims on unrelated subjects, which we’ll leave out of this particular article.

Trump said at the press conference that he released the rough transcript of his July phone call with Ukrainian President Volodymyr Zelensky after House Intelligence Committee Chairman Adam Schiff, the Democrats’ lead impeachment manager, gave an erroneous account of the call at a committee meeting: “He had no idea that I was going to release the transcript. He never thought I’d do that.”

Facts First: Trump released the rough transcript before Schiff gave his exaggerated rendition of the call, not after. Trump’s initial complaint was that Schiff had ignored the available transcript; he then began reversing the timeline of events.

The Democrats, Schiff and the transcript

Trump said at the press conference: “But they never thought we were going to release it. When we released that conversation, all hell broke out with the Democrats, because they say, ‘Wait a minute. This is much different than Shifty Schiff told us.'”

Facts First: No Schiff-related dissension broke out among Democrats when Trump released the rough transcript. Again, Trump disclosed the document before Schiff made his comments.

Facts First: There is no evidence anyone has “disappeared” or said “we got problems” upon seeing the rough transcript — which overwhelmingly corroborated the allegations of the first whistleblower. According to the second whistleblower’s lawyer, that person never planned to file a separate complaint, only to provide corroborating information to support the first complaint. Whistleblowers have no obligation to speak publicly, and them not doing so doesn’t mean they “disappeared.”

The call with Zelensky

Trump said at the press conference that “nobody talks about” his call with Zelensky because it was so perfect. “I never see them talking about the transcription. I never see them talking about the call, because there’s nothing to say,” he said. Similarly, he told CNBC, “You notice they don’t mention the calls, though. They never mention the calls. They talk about everything but the calls.”

Facts First: Democrats are still talking about the controversial July call, during Trump’s impeachment trial and in other public forums. They did so extensively at the trial on Wednesday day.

The timing of US aid to Ukraine

At the press conference, Trump said that aid to Ukraine was delivered even sooner than it was scheduled to be: “Now, here’s the other thing: They got their money long before schedule. They got all their money.” He said on CNBC: “So they got the money. In fact, they got it very early.”

Facts First: The money did not come early or ahead of schedule. Trump’s freeze on the aid meant that $35 million could not get out the door before a legal deadline of the end of September, forcing Congress to pass a deadline extension.

Trump said on CNBC of Obama-era aid to Ukraine: “President Obama gave them nothing. He gave them pillows and sheets and things like that, and I gave them tank busters.”

Facts First: While Obama, unlike Trump, did refuse to provide lethal assistance to Ukraine, Obama sent Ukraine much more than pillows and sheets; his military aid included drones, armored Humvees, counter-mortar radars, night vision devices and medical supplies. You can read a full fact check of this claim here.

He said nearly the same thing on Fox Business: “Why isn’t Germany and France and UK and all these other countries in Europe that are much more affected than us, why aren’t they paying something?”

Facts First: European countries, including France and Germany, have provided at least hundreds of millions of dollars worth of assistance to Ukraine since Russia’s invasion in 2014. You can read a full fact check here.

Trump said on Fox Business: “You look at what I did with NATO: $530 billion more.”

Facts First: Trump’s math was off. NATO has announced that it expects non-US member countries to add $400 billion to their defense budgets, over 2016 levels, by 2024. Regardless of how much credit Trump deserves for the increase, he was inaccurately adding an initial $130 billion increase that is part of, not in addition to, the expected $400 billion.

Facts First: Trump was at least slightly exaggerating Green’s comments. In May, Green said this: “I’m concerned that if we don’t impeach this President, he will get reelected.” In September, when Trump previously claimed Green had said “we can’t” beat Trump without impeachment, Green told CNN, “I never said we can’t beat the President.” 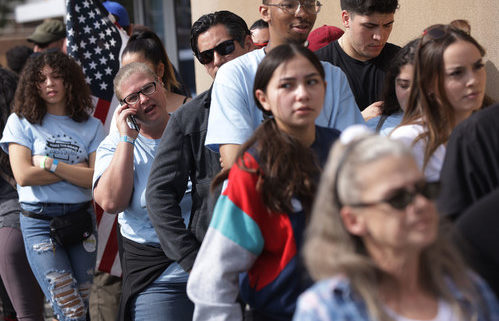