El Paso, Texas -- One Midland couple is hoping to find a local Emergency Medical Techinician who helped them deliver their baby girl on Mother’s Day in El Paso. They want to thank him for turning an elevator birth deliver into a moment they will never forget.

Mott and Camiran Bull were visiting the Borderland from Midland for a car show this past Mother’s Day weekend.

“We had been here all weekend," said Mott, "Sunday comes around and I had not been feeling good the day before but I didn't think anything of it.”

After the car show, the couple was about to head back home when a pregnant Mott asked to make a pit stop at a northeast El Paso Circle K store because she began feeling worse.

“I can't get up and I can't get out of the bathroom, I can't do anything,” said Mott.

It was at that moment when friends told the pregnant mom that she was going into labor.

"She’s like, 'you guys have to deliver the baby in the bathroom you have to do this,'” said Mott.

Dad made a call to 911 and the EMT was able to arrive at the Circle K before Mott could give birth.

“They were all very helpful, but one of the men specifically was just really really helpful," said Mott, "He mentioned that he had just done this a few weeks ago with his wife ,so he knew what I was going through."

Mott was taken to University Medical Center to deliver her baby, but to her surprise her little princess would make an appearance sooner than expected.

“We’re not in the delivery room," said Mott, "We have no doctors around us.. It's just us just me and the EMTs and sure enough she comes right as we get in the elevator.”

Weighing in at 4 pounds and 14 ounces, Paisley Jay Bull was delivered nearly six weeks early on Mother’s Day afternoon in the UMC elevators. It was a delivery that came as a surprise to dad.

"I ran next door to the other entrance and went up the elevator, and sure enough I went into labor and delivery and they said that they needed me to sign a paper," said Bull. "Then, they said congratulations your baby was delivered and I said oh that’s exciting I guess I missed the whole thing.”

Through the commotion, the couple was unable to personally thank the EMT who helped deliver their baby girl.
Both mom and dad want to let that EMT know how safe he made them feel.

"I just wanna tell him that he did an amazing job. Anytime I said that I was uncomfortable, he was there to walk me through it and I just want to say how much I appreciate that because I was really scared,” said Mott.

The couple will be staying in El Paso for a few days as their newborn daughter gets the treatment she needs at El Paso Children’s Hospital. During their stay, they’re hoping to connect to the EMT to personally thank him.

Mott described the EMT as a tall man, with a tattoo on his upper right arm and shaved head. 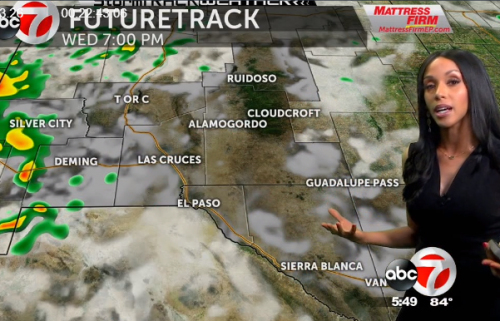