The road into Tal Abyad was eerily empty. The Syrian border town’s shops were all shuttered, following a steady stream of artillery strikes on its outskirts that began Thursday.

Among the few people CNN spotted was a group of women — one of them carrying a baby — walking north toward the Turkish border.

“We are going to demonstrate against the Turkish invasion,” one said, smiling defiantly.

The women were among 100 protesters who marched toward the border Thursday in a show of defiance against Turkey’s ground offensive in northern Syria.

Turkish President Recep Tayyip Erdogan launched what he called “Operation Peace Spring” on Wednesday in an effort to drive away Kurdish forces — who were a key US ally in the fight against ISIS — away from the border, and use the area to resettle around 2 million Syrian refugees.

The operation comes just days after US President Donald Trump announced that US troops would pull back from the area, prompting a storm of criticism, including from his own Republican party.

On the frontline of this operation is Tal Abyad, one of the places within the 30-kilometer-wide (18.6 miles) border corridor that Turkey plans to clear.

Despite their defiant smiles, the Kurdish women here were warned against joining the demonstration.

Amid explosions in the distance, a female Kurdish official approached the women, telling them: “Take your baby and go to a car or somewhere safe.” They walked away.

Further down the road into town, the group of protesters gathered again, chanting and playing music.

Among them was 34-year-old Nujeen Youssef, a Kurdish fighter with a pink bandana covering her hair.

She said most civilians had left after the Turkish bombardment that morning, but that she intended to march right up to the border.

“We aren’t the ones who are afraid, they (the Turks) are afraid,” she said in a raspy voice.

Meanwhile mortars thudded nearby. Someone grabbed the microphone and told the protesters to go home as the strikes were drawing closer.

Driving out of the city, the air was thick with black smoke. Kurdish fighters appeared to be burning tires in multiple locations to create a smoke screen against the Turkish onslaught.

It’s difficult to know where is safe anymore in this area. There is no haven for people to flock to.

Back at the shortlived demonstration, a Kurdish commander, who refused to give his name, had the air of a man resigned to his fate.

He had seen his fair share of fighting in the past — he said the tip of his right thumb was missing from a previous battle against ISIS.

When asked how Kurdish fighters — now stripped of US support — could possibly match the military might of the Turkish army, he shrugged. 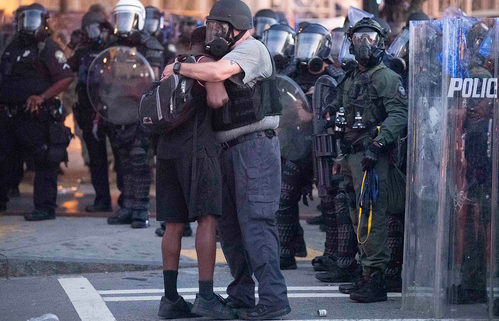