The video begins with the sound of a guitar strumming and a voice singing in Spanish. The main character is sketched quickly, beginning with her eyes, then face, hair and shoulders. She gazes into the distance.

Over the course of the three-minute stop-motion drawing animation video, we watch as the main character goes about her life, immigrating to the United States and trying to succeed in her new country.

The animation is the work of artist Hugo Crosthwaite, part of a series based on his interviews with people living or passing through Tijuana, Mexico — his birthplace.

“The resultant improvised drawings represent the collective memories and oral histories from that part of the Mexico-U.S. border,” a news release reads on Crosthwaite’s website.

The video, titled “A Portrait of Berenice Sarmiento Chávez,” won the Outwin Boochever Portrait Competition on Friday, held by the Smithsonian National Portrait Gallery every three years since 2006. Crosthwaite is the first Latino artist to win the competition.

When Crosthwaite originally interviewed Chávez, she embellished her story with elements of exaggeration and fantasy, he said in a statement. Yet he chose to include those elements in his portrayal.

“We are defined by the stories that we tell ourselves, either real or imagined, to deal with difficult situations in our lives,” he said. “Rather than playing the role of journalist where I recount a factual event, I have left the video open to interpretation just as Berenice left me with her vague and unsettling story.”

Crosthwaite to receive $25,000 prize for his piece

The final product is meant also to speak to the vulnerability and disenfranchisement of immigrants, he continued, especially the violence women face at the southern border.

To complete the artwork, Crosthwaite took some 1,400 images during his process — drawing a bit, then snapping a photo, drawing some more, then another photo — thus animating his own artistic process, said curator Taína Caragol, part of the jury that selected Crosthwaite as the winner. The final effect is an embedded sense of urgency throughout his video. The viewer is left hanging on as he creates.

She called his technique “masterful.”

“I think that gives the artwork almost like a magical quality of seeing artistic process as an act of transformation, of a reality,” Caragol told CNN.

For his work, Crosthwaite, who now lives in San Diego, will receive $25,000 and a commission to create a portrait for the National Portrait Gallery’s permanent collection.

Crosthwaite’s work will be on display as part of the exhibition “The Outwin 2019: American Portraiture Today,” which will also feature the work of all 46 competition finalists.

All the pieces included will address socio-political themes, such as immigration, gun violence, LGBTQ rights and race relations.

In addition to being the first Latino winner, Crosthwaite is the first performance artist winner. His work isn’t what is traditionally thought of as a portrait, and therefore challenges notions of what a portrait can be and do, Caragol said.

The video ends with a portrait of a child. It’s unclear whether the child belongs to Chávez or is Chávez herself, but the final frame is significant, said curator and juror Dorothy Moss.

“(It) brings a focus to this vulnerability,” she told CNN. “I think we can all relate to it. It becomes universal.”

As the film comes to a close, that final image of a child is blacked out with paint, and the credits run. 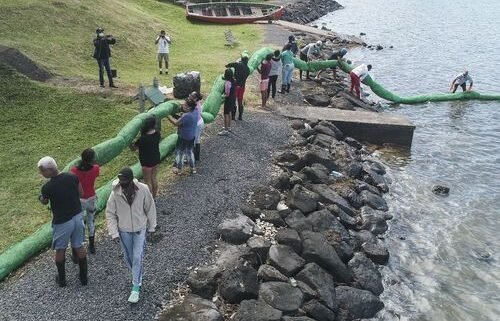