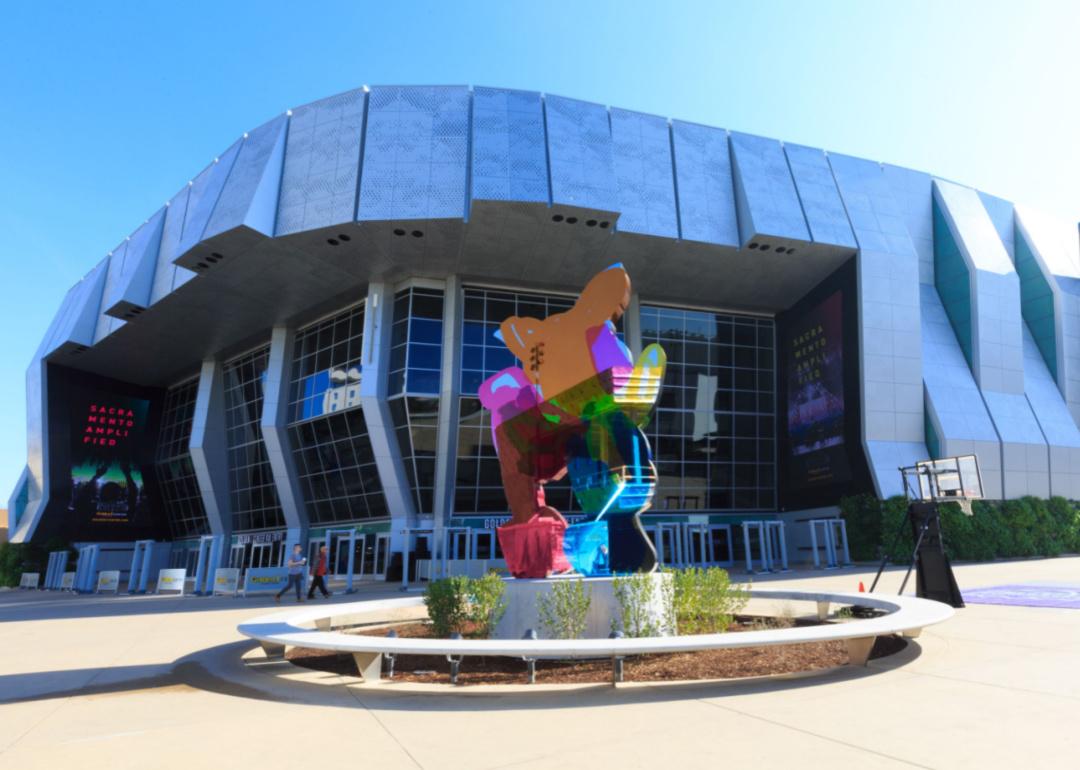 Exterior view of the Capitol One Arena

On July 12, 2022, the Pittsburgh Steelers rocked the NFL world by announcing their home stadium, Heinz Field, would be renamed Acrisure Stadium.

The 153-year-old, Pittsburgh-based H.J. Heinz Company had owned the stadium’s naming rights since the venue replaced the carpet and concrete of Three Rivers Stadium in 2001. Now the Steel City’s NFL home is branded after a Grand Rapids, Michigan, insurance company four years younger than the stadium itself. The decision led to plenty of local lambasting online.

Several weeks later, the NFL received another naming jolt when Pittsburgh’s divisional rivals, the Cincinnati Bengals, revealed their own stadium rebrand. This time, the announcement wiped away a name without corporate sponsorship—Paul Brown Stadium, titled for the franchise’s founder—and replaced it with Paycor Stadium, after a human resources software company. Cincinnati’s stadium rename left Soldier Field in Chicago and Lambeau Field in Green Bay, Wisconsin, as the NFL’s only two unsponsored venues.

With the recent naming upheavals impacting the 2022 NFL season, Stackeranalyzed facts and figures behind the naming rights for 139 professional sports venues across six North American major leagues: MLB, MLS, NBA, NFL, NHL, and WNBA. To do this, we built a dataset using venue and league websites, box scores, and news articles.

All told, the situation looks bleak for unsponsored venue names. Only one league—the MLB—features more than three such stadiums. And several leagues could be down to one (or even none) in the near future. Our full findings lay ahead.

You may also like: 30 examples of sports bringing the world together 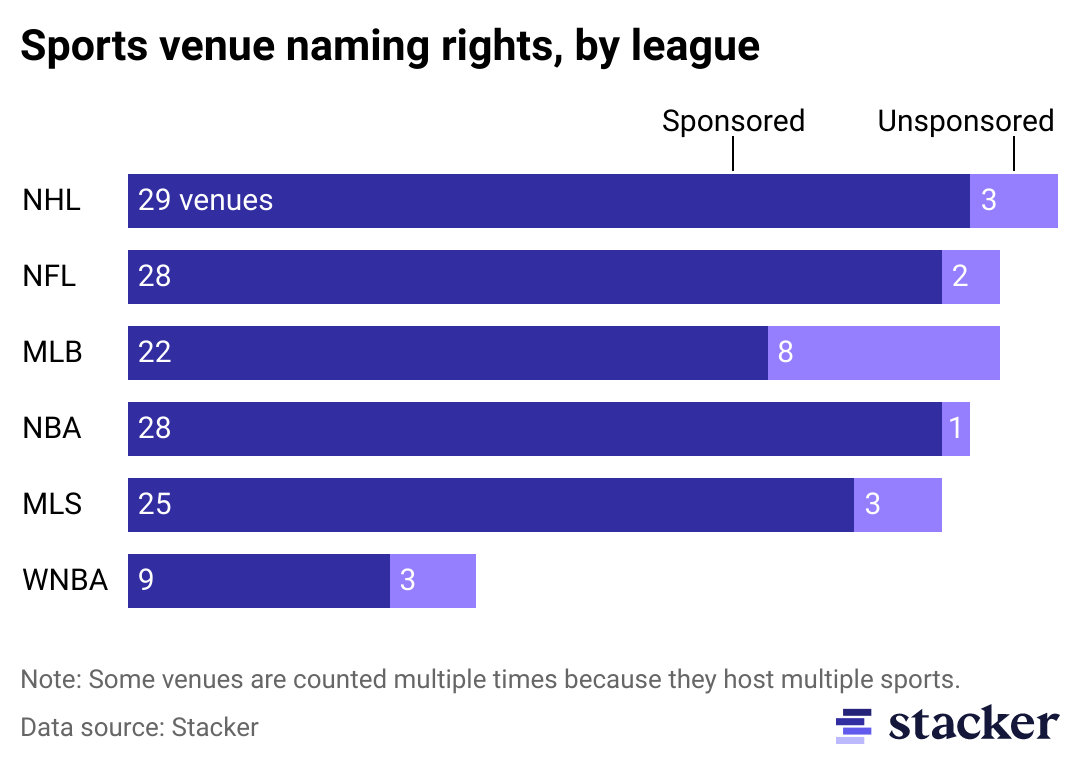 Just 12% of sports venues are without corporate monikers

Baseball, long bonded to tradition, features eight stadiums with unsullied names. These diamond cathedrals include Fenway Park and Yankee Stadium, as well as the Angels and Dodgers stadiums in California. The remaining four are Camden Yards in Baltimore, Kauffman Stadium in Kansas City, Missouri, Nationals Field in Washington D.C., and Wrigley Field in Chicago.

Beyond baseball, unsponsored venue names could be considered an endangered species. In the NHL, Arizona State University’s Mullet Arena is the temporary home of the Arizona Coyotes until the franchise can find long-term digs. The Florida Panthers’ FLA Live Arena in Miami is only temporarily so named until a new naming sponsor can be found.

In the WBNA, the owners of all three unsponsored arenas have previously sought, or voiced approval for, signing over their naming rights. In MLS, the B.C. Pavilion Corporation announced in 2019 intentions of selling out the naming rights for B.C. Place in Vancouver, British Columbia. However, none in either league has revealed immediate plans to change venue names.

There are also questions about the future of Soldier Field, one of pro football’s hallowed grounds. In the past year, the Chicago Bears have signaled their desire to venture away from their current downtown location to the Chicago suburb of Arlington Heights, going so far as to sign a purchase agreement for the former Arlington Park Racetrack property. However, the Chicago Fire of MLS will continue to play at Soldier Field for the foreseeable future, and it’s possible the stadium would become soccer-specific if the Bears bolt for a new home.

With the fate of as many as seven venues in flux, just two non-baseball venues have avoided much of the rebranding discussion: Lambeau Field, home to the Green Bay Packers in the NFL, and Madison Square Garden, home to the New York Knicks in the NBA and the New York Rangers in the NHL. 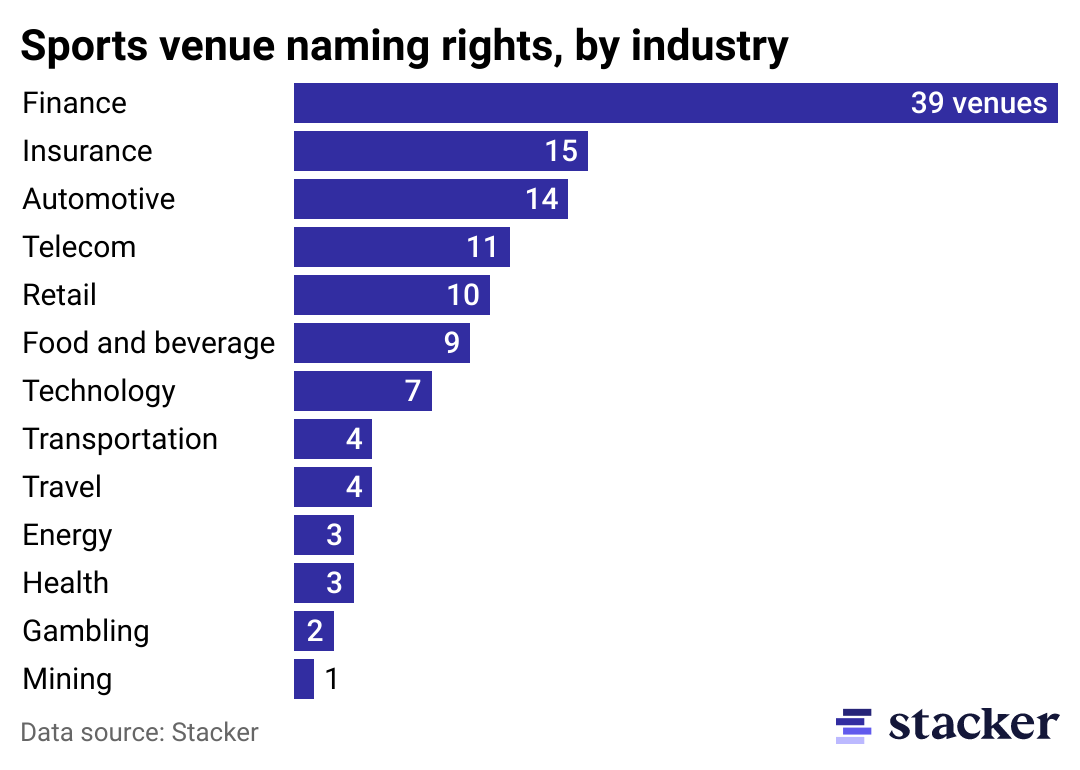 Nearly one-third of all 122 sponsored venues in our analysis are named after financial companies, including banks, mortgage firms, and cryptocurrency exchanges. Companies in the industry with multiple venue sponsorships include Chase Bank (Chase Center in San Francisco and Chase Field in Phoenix), PNC Bank (PNC Arena in Raleigh, North Carolina, PNC Park in Pittsburgh, and PNC Stadium in Houston), and Scotiabank (Scotiabank Arena in Toronto and Scotiabank Saddledome in Calgary, Alberta).

When digging into how industries break down by sport, finance is universally common in all leagues. Insurance is primarily popular in the NFL with six stadiums and MLB with four. The third most common industry, automotive, crops up the most in the NHL and MLS with five venues apiece. 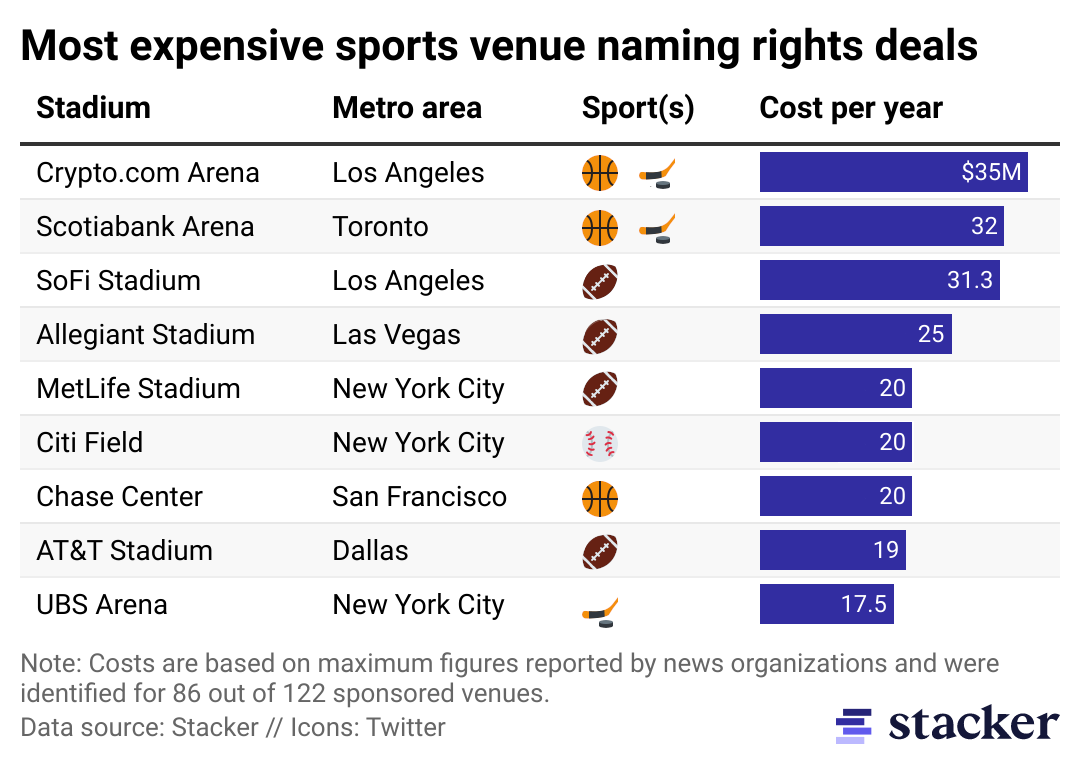 Table of the most expensive sports venue sponsorship deals.

The reason why so many venues sell naming rights is simple—these deals can be extremely lucrative.

Crypto.com Arena’s naming rights deal, for instance, reportedly amounted to $700 million spread out over 20 years when the crypto exchange company slapped its name on the arena formerly known as the Staples Center. Crypto.com’s sponsorship is roughly six times more than the $116 million Staples reportedly signed up for with its 20-year deal in 1999.

The high price tag of Crypto.com Arena likely isn’t just due to the massive Los Angeles market. The venue is also notably the only one in North America home to more than two major league teams. Both the city’s NBA teams play there, as do the Los Angeles Sparks of the WNBA and the Los Angeles Kings of the NHL.

The Los Angeles area’s other premier sports venue and home of the NFL’s Rams and Chargers, SoFi Stadium in Inglewood, reportedly cost SoFi $625 million over 20 years in a 2019 deal. That works out to just over $31 million per year, which just about covers the average annual salary of Rams defensive tackle Aaron Donald.

For companies, the advantage lies in more than just a marketing ploy. As the long-time name-bearer for Pittsburgh’s NFL stadium, Heinz managed to weave itself into the fabric of the NFL in a way that made fans upset when “Heinz” was dropped from the stadium’s name and giant ketchup bottles were removed from the stadium’s scoreboard.

Crypto.com swiping the name of the Staples Center drew similar ire. Such strong and visceral associations make it not shocking that companies like Acrisure or Crypto.com leap at becoming landmark names for years to come. 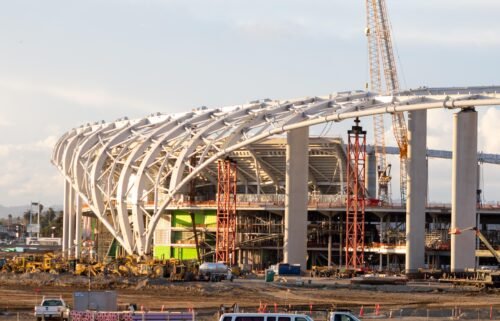 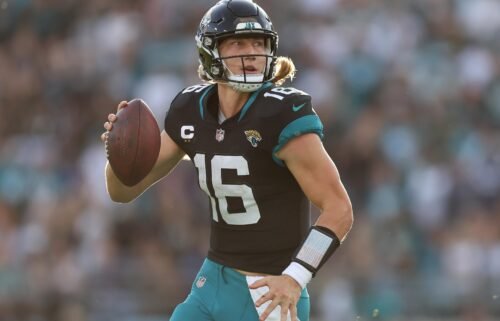 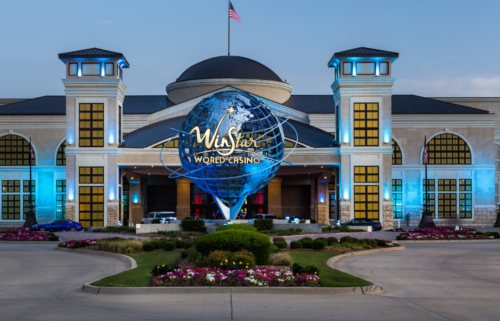