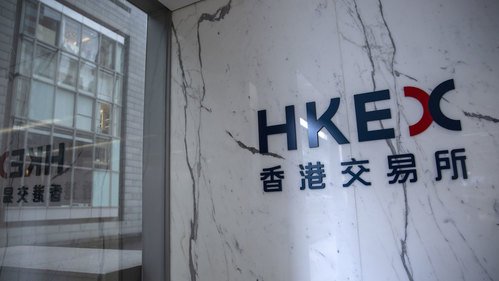 Hong Kong stocks recorded their worst day in more than five months after renewed concerns about how the city is handling ongoing protests, and as a new virus spreads throughout China.

The city’s benchmark Hang Seng Index ended down 2.8% as it received a double dose of bad news. First, Moody’s downgraded the city’s credit rating to Aa3 from Aa2, citing an “absence of effective response and lack of clarity” on how the government plans to address political and economic concerns. The city has been gripped by pro-democracy protests for months.

Second, China confirmed that the Wuhan coronavirus — a disease that has killed at least four people and sickened more than 200 in the country — can be transmitted between humans.

There have been no confirmed cases of the virus in Hong Kong. But there have been 14 cases in neighboring Guangdong province, including one in nearby Shenzhen.

Shares of Hang Seng components were down across the board. Major property developers like Wharf Real Estate Investment Company and Hang Lung Properties were among the worst performers, having lost more than 4%. Chinese car maker Geely Auto was the worst performer — down 5.3%.

While the outbreak of the respiratory virus originated in Wuhan, the largest city in central China, market and economy analysts suggested that it could become a major economic risk for the region should it continue to spread.

The timing of the outbreak is of particular concern, since it coincides with the Lunar New Year holiday, said Rajiv Biswas, IHS Markit’s chief economist for Asia Pacific. Millions of people are expected to travel within China and throughout other regions in Asia during this time.

Earlier this month, Chinese scientists identified the pathogen as a new strain of coronavirus, the same family as severe acute respiratory syndrome (SARS). SARS infected more than 8,000 people and killed 774 in a pandemic that ripped through Asia and spread as far as Canada nearly two decades ago.

Since the SARS outbreak, China’s international tourism has boomed, so the risks of a SARS-like virus epidemic spreading globally have become even more severe, Biswas said.

The “sea of red” in Asian markets on Tuesday highlights “if nothing else, that the global economy has precious spare capacity to absorb unexpected crises,” wrote Jeffrey Halley, senior market analyst for Asia Pacific at Oanda, in a research note Tuesday.

Major airline stocks in the region also fell Tuesday. At least one Chinese state media outlet, the China Youth Daily, suggested that the nation’s railway operators and airlines waive cancellation fees to help “contain the spread of the disease.”

Air China, China Eastern Airlines and China Southern Airlines — the country’s three biggest airlines — fell between 5.9% and 6.7% on Tuesday in Hong Kong, where they trade but are not components of the Hang Seng.