Residents of a Las Cruces trailer park are shocked and disturbed that a neighbor has been charged with possessing and making child pornography.

“It’s very sad,” said Marissa Gomez in Spanish, who lives with her three young children across the street from where 28-year-old Raymond Pacheco was arrested last week.

Las Cruces police have charged Pacheco with five counts of sexual exploitation of a child. According to court documents, he lives in the Las Brisas Mobile Home Park.

Police did not release exact ages of the girls in the alleged photos, but some children “appeared to be between the ages of 4-7” and “between the ages of 3-6,” according to court documents. According to the documents, he had multiple saved emails on an account with images of young girls engaging in sexual acts.

“The emails had a subject title which appeared to represent the way the account holder wanted to remember and preserve those photos,” according to the documents.

Residents said there are a number of children living in the neighborhood.

Meantime, according to the New Mexico Department of Public Safety, there are 13 registered sex offenders within a mile of the trailer park. 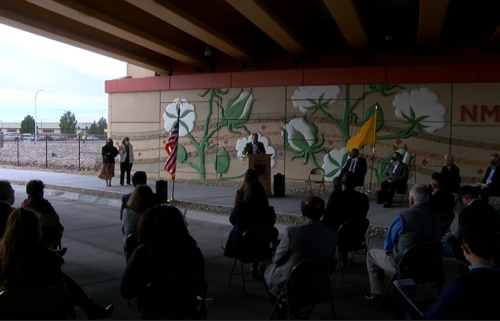