Board member Carol Cooper had wanted to revisit her vote after the board's decision to rename the school last month. For more than 30 years, the school has had the name of the controversial Spanish conquistador Don Juan de Oñate.

"I wish I had not voted to change the name," Cooper said during Tuesday night's meeting. "I do not believe this serves our students. History - good or bad - is part of our lives."

“Your action to vacate the board’s decision directly questions procedural competence," Dallman said in her ruling. "There wasn’t any procedural discrepancy with respect to your opinion.”

Dallman cited the votes of school districts in Texas, Alabama and California around the country to change controversial school names during "this historical awakening."

"Should all these school boards' decisions be overturned because one board member changes his or her mind?" Dallman asked.

Earlier in the day, about two dozen people protested the district's decision to rename the school, which they had hoped would be reconsidered.

"We're Oñate - not some guy that lived 500 years ago," said Jeff Johnson, a parent, coach and at times, teacher at the school. "We've got to stop this cultural cleansing. Stop ignoring history."

ABC-7 had reported Saturday that the school board was set to meet Tuesday and consider whether to take back the decision to rename the high school.

But ultimately that didn't happen, with a majority of the board voting again to rename the school - and then voting to select Organ Mounatins High as the new name. 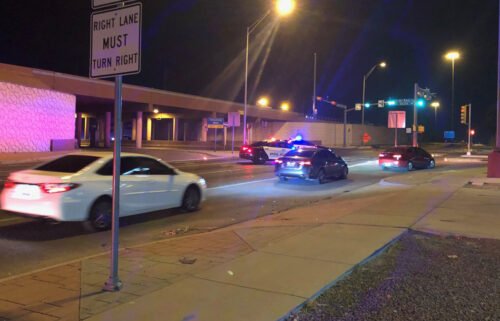