Chuck Schumer is confronting his most daunting series of legislative landmines in his young tenure as Senate majority leader, navigating conflicting demands from his left and his moderates — all the while facing wary Republicans after years of partisan brawling with the hard-nosed New Yorker.

The legislative dilemma comes to a head in this summer’s sprint before the August recess, with the push to enact roughly $4 trillion of President Joe Biden’s infrastructure and social agenda — something that could lead to a huge victory for the 22-year Senate veteran or could all collapse and prompt a fresh round of bitter recriminations with their majority on the line in next year’s midterms.

As he allows bipartisan talks to play out on a smaller $1.2 trillion bill, while greasing the skids for Democrats to go-it alone on a massive plan that could cost as much as $6 trillion and would need the support of all 50 members of his caucus, some liberals warn that Schumer could be giving in too much to Republicans and playing into Senate Minority Leader Mitch McConnell’s hands.

“I feel frustrated because we need to move,” Sen. Elizabeth Warren, a Democrat of Massachusetts, when asked if Schumer were letting bipartisan infrastructure talks drag on too long. “I understand that Mitch McConnell wants to run out the clock and hope that Democrats are not able to produce anything. It’s up to us to show him he’s wrong. And that we are going to produce.”

But some Republicans say the opposite: Schumer is not working enough with them.

“Let me just that I hope that Sen. Schumer starts working with Republicans,” said GOP Sen. Susan Collins of Maine, who engaged in a tense floor confrontation with the Democratic leader last month, which he downplayed as a “misunderstanding” and left her perplexed at his behavior. “I know he cares about this country. But he really needs to put the country first ahead of partisan considerations.”

Schumer is also facing this cold legislative reality: A 50-50 Senate — with 60 votes needed to break a filibuster — and moderates in his caucus who would rather cut a deal with Republicans than cater to the demands of the left. So the voracious, 70-year-old New Yorker has been allowing Democratic senators to have their say, greenlighting talks with Republicans, holding a string of meetings with various factions to let them air out their concerns and trying to preach one overriding message: Unity.

“We all know we’ve got to come together or nothing gets done,” Schumer told CNN in an interview.

So he has been careful not to alienate his more moderate members — like Sens. Joe Manchin of West Virginia and Kyrsten Sinema of Arizona, who have yet to commit to advancing a party-line bill through the budget reconciliation process — much to the chagrin of the left.

“Not at all,” Manchin said when asked if Schumer were pressuring him to back a party-line approach.

“He understands who I am, not just my politics but who I am, my DNA,” Manchin said in an interview. “So he’s always understood that and been very respectful of that. And we disagree. We can disagree and sit down and talk about it and discuss it and everything and still respect each other and have a great friendship and relationship.”

Schumer declined to say if he has received commitments from Sinema and Manchin to back a party-line approach to eventually advance the Biden agenda through the budget reconciliation process — as many in his caucus have demanded they do.

“I’m not going to get into my individual talks with members,” Schumer said. ‘

“The bottom line is: I think we all know in our caucus, we need big bold change with problems facing America,” Schumer said. “And we also know another thing. Our unity is our strength.”

Schumer added: “With 50 votes, we all have to be on board to produce that kind of change. We’re working the two tracks. I think they’re both working very well. I’m very hopeful that we can get a lot done.”

Schumer grapples with Democratic divisions and wins over some Republicans

The New York Democrat, who faces reelection next year and has no formidable primary opponent yet, has been leery of putting bills on the floor that won’t get the backing of all 50 of his members, a reason why he has yet to schedule votes on some issues — like gun control legislation — as talks behind the scenes continue.

But after weeks of quiet lobbying to win over Manchin, Democrats believe they’ll get all 50 of their members behind legislation to overhaul voting rules — a top priority for their party.

Scheduled for a key test vote Tuesday, Democrats fear the political fallout if Manchin were to be the one Democrat to join all Republicans in opposing it, even as they know the bill stands no chance of getting the 60 votes needed to advance.

Schumer has stepped back and allowed bipartisan talks on policing and gun regulations to move forward at their own pace, realizing those persistently difficult issues may have a better chance if dealt with by rank-and-file senators invested in them rather than at the leadership level — where McConnell and Schumer have sparred bitterly for years.

Democrats say Schumer’s goal is to empower senators to have a say in the process — whether it’s making their points at private caucus meetings or allowing them to lead talks that could produce legislation. And at the end of the day, however, it’s Schumer’s call about which way to go.

“I’ve spent many hours thinking about this,” said Montana Sen. Jon Tester, a red state Democrat who is part of the bipartisan infrastructure talks. “Last weekend I was on a tractor for 30 hours over the 48-hour period, and I thought about it. I think Chuck’s doing exactly what he needs to do, and I will tell you that it’s not easy for him. But I think he’s doing what he needs to be.”

While Schumer has vowed to force a vote on House-passed background checks legislation on gun sales if talks continue to stall — to demonstrate GOP opposition — he has not yet scheduled a vote. And the policing talks — led by Sen. Cory Booker, a Democrat of New Jersey, and Sen. Tim Scott, a Republican of South Carolina — have moved with sporadic progress for months while Schumer has been briefed but stayed on the sidelines.

When he is procedurally able to do it, Schumer uses the tools of the Senate to muscle big bills into law over staunch Republican opposition — as he did in March when he employed budget reconciliation to win passage of the $1.9 trillion American Rescue Plan without any GOP support.

“I mean Schumer is getting a ton of pressure from the left,” said Senate Minority Whip John Thune, Republican of South Dakota. “I mean he’s under pressure back home. He’s got members of his House delegation who were on him every day, and I think the left is not going to be satisfied unless they get everything. And if they try and get everything, they may have a hard time getting all Democrats. They’re in a tough spot.”

But at times, Schumer has won over Republicans, including as he pushed through a bill with the support of 19 Republicans that he championed with GOP Sen. Todd Young of Indiana to bolster the United States’ competitiveness with China.

“Oh, I think Chuck is a 100% fox,” said Sen. John Kennedy, a Republican of Louisiana. “I like Chuck. … He’s very good at what he does. He’s very shrewd. He’s very passionate. I told him the other day we don’t agree on a lot of things. I told Chuck: ‘It must suck to be as wrong as you are most of the time.'”

But there are some GOP critics who remain perturbed at his antics, including Collins.

As Schumer was pushing Republicans last month to back legislation to create an outside commission to probe the January 6 attack, Collins was seeking to amend the measure to make changes over how staff on the panel would be selected and setting specific timeframes for the probe to end. Collins had negotiated directly with Speaker Nancy Pelosi, and Manchin was relaying the proposed changes to Schumer, who also agreed with them.

“So, imagine my surprise when right before this very important vote, what does Sen. Schumer do? But go to the floor and give an inflammatory highly partisan speech in which he does not mention that we’ve worked out this agreement,” Collins told CNN. “And he turns to the Republican side of the aisle, and says: ‘What are you afraid of? Do you not want to know the truth?’ That is not exactly conducive to getting Republican votes.”

After his remarks, Collins confronted Schumer on the floor and told him she found it “totally unbelievable” that he would give a “harsh partisan speech.” Collins said there were concerns then that one fence-sitting senator — Rob Portman of Ohio — would not back the bill after Schumer’s remarks. But then Schumer relayed to Portman that he did support Collins’ proposed changes, and Portman later supported advancing to the measure, which ultimately fell short of the 60 votes needed.

During their tense exchange, Collins indicated that Schumer motioned to her to lower her voice.

“He refused to stand to talk to me about it. He stayed seated and would not engage,” Collins said. “He did not look at me. And he said, ‘I’ll talk to Portman if that’s a problem. I’ll talk to Portman.’ And I said: ‘The damage has been done by the speech.'”

In the interview, Schumer downplayed the spat.

Told that Collins volunteered that his interaction with her could be construed as “condescending and sexist,” Schumer said: “I’m not going to comment on that. It was a misunderstanding. I like to get along with everybody.”

Collins has in the past expressed anger towards Schumer over his super PAC launching scathing ads against her during her hard-fought reelection campaign last cycle, attacks she contended were unfair and false.

“They’re talking — infrequently, but they’re talking,” said Senate Majority Whip Dick Durbin of Illinois when asked about the two senators. “I think there were hard feelings on her part after the last election.”

But Collins says there have been times where the two have worked constructively — pointing to how Schumer called her up and urged her to work with Sen. Mazie Hirono of Hawaii to cut a deal on a bill aimed at combatting Asian-American hate crimes. It later passed the Senate in April with just one dissenting GOP vote.

“To me, that shows what we can do if he on those occasions when he is willing to step forward and try to truly solve a problem, rather than create an issue for partisan political purposes,” Collins said.

Asked if he thinks he can repair their relationship, Schumer said: “I hope so.”

Yet Schumer has maintained friendly relations with a number of other Republicans, in part stemming from years of going to the Senate gym in the morning hours and ribbing GOP senators.

Utah Sen. Mitt Romney, a key GOP dealmaker, went to the same Harvard law school class as Schumer and is close friends with one of the Democratic leader’s former roommates. And the two senators often run into each other while working out.

“We get along on a personal basis,” Romney said. “We typically exercise on the same stationary bike in the gym. We take turns on that one.” 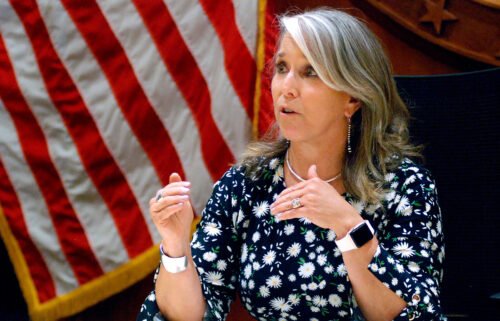 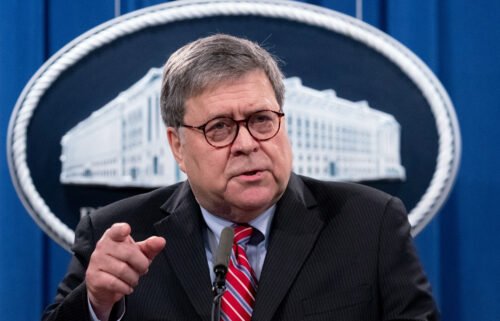 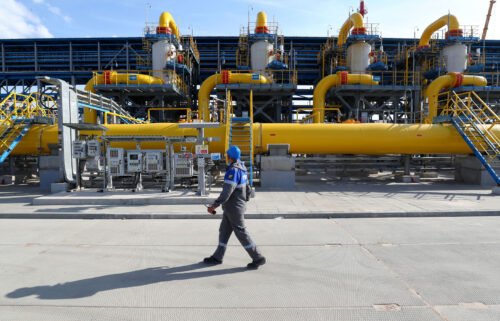