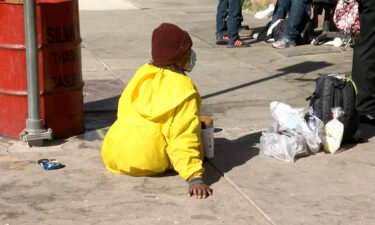 EL PASO, Texas -- The somewhat controversial statue "The Equestrian" that adorns the entry to the El Paso International Airport has been vandalized with spray paint.

The discovery was made a day after dueling city protests took place with both pro-police and anti-police factions.

The phrase "Your god is not my god," was graffitied in Spanish along with other phrases and obscenities.

The statue is of Don Juan de Onate depicted as a Spanish conquistador.

Onate traveled through the Borderland in the late 1500's and early 1600's.

Martha Vera, the Honorary Consul to Spain in El Paso, is proud of Onate's exploits and is disheartened by the vandal's act.

“It saddens me terribly that to see that our statues, that our history is being defaced,” said Vera.

The Honorary Consul to Spain also remarked that “without Don Juan De Onate coming through here, there would be no Hispanics, no Catholics. Who knows if we would of even had an El Paso."

But UTEP Assistant Professor of Communications Frank Perez has a contrarian view.

"This idea that we owe Onate this debt of gratitude for founding the city, I would say is pretty erroneous," Perez contends.

Perez, who has co-written a book on Onate's travels throughout the southwest, also maintained that "we can't give Onate a pass. He is responsible for the deaths of over 800 Acoma Indians including 300 women and children."