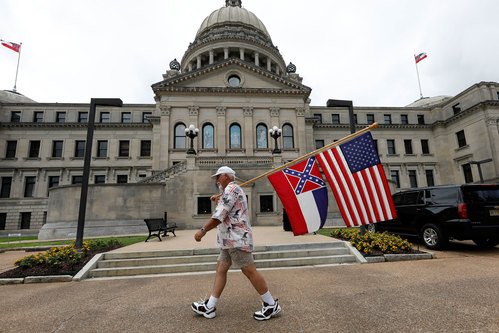 If you’ve been in contact with your state lawmaker in Mississippi, you may want to get a coronavirus test.

About one in six state lawmakers have tested positive for the coronavirus, according to Dr. Thomas Dobbs of the Mississippi Health Department.

Mississippi Governor Tate Reeves said on Tuesday that he and his daughters tested negative for the virus, tweeting they had “limited contact with the people who were diagnosed.”

This spike in infections follows an especially busy few weeks in the Capitol. Members have met to discuss the state’s budget, an unemployment crisis, and in June, the legislature passed a historic bill to remove the Confederate emblem from the state’s flag. Many visitors and advocates attended the Capitol to watch the debate and to protest.

Without masks, it may not come as a shock that the virus spread so efficiently within the legislature. On the floor, desks are packed tightly together, and members gather closely to communicate with their colleagues.

“We could have done more to prevent this,” State Rep. Robert Johnson III, the Democratic leader of the state’s House of Representatives, said in a statement to CNN.

“It seems it was all about some erroneous, dangerously promoted political stance. It’s disgusting. Our governor refuses to order statewide mask requirements and our leadership decided not to require it at the Capitol.”

One lawmaker who contracted coronavirus, Rep. Ronnie Crudup Jr., shared that although he did wear a mask most of the time, he could have been more vigilant. “I can honestly say that I wore my mask 95% of the time when I was around the Capitol and public places, but that 5% can make a big difference,” he wrote in a Facebook post.

On Thursday, Gov. Reeves mandated mask orders for 13 counties experiencing the greatest spikes of Covid-19, including Jackson, Biloxi and Gulfport. “Mississippi is in a fight for our lives,” he said.

Even President Donald Trump, who has stubbornly refused to wear a mask in public and ridiculed those who have, said that he will wear a mask during a visit to Walter Reed National Medical Center on Saturday.