*UTEP announced Wednesday Souley Boum has returned to the team after missing some time due to covid-19 protocols.

*The following interview with Joe Golding was recorded prior to Boum's return to the team.

The Aggies held off a late rally by the Miners for a 77-71 final result in Las Cruces in both team’s second game of the season on Nov. 13. Since then the Orange and Blue have won three of four, including most recently defeating FAMU, 67-53, on Nov. 24, before breaking for Thanksgiving.

Jon Teicher (41st year) and Steve Yellen (19th year) will be on the call for Friday’s game, which can be followed on 600 ESPN El Paso, the UTEP Miners App and Stadium.

For tickets, fans may call the Eisenberg Family Ticket Office at (915) 747-UTEP, email tickets@utep.edu, or visit www.UTEPMiners.com/tickets or in person (Brumbelow Building on UTEP campus, 201 Glory Road) Monday thru Friday, 8 a.m. to 5 p.m.

It is the Miners’ oldest series, while rating as the second oldest for the Aggies. It began in 1914 and the two squads squared off at least twice annually every year since 1944-45 before Covid interrupted that last season.

The Orange and Blue are looking for their second straight win in the series when playing in El Paso.

This is head coach Joe Golding’s first match-up against NM State in the Sun City, while Aggies’ head coach Chris Jans is 6-1 against the Miners.

NM State has won 11 of the last 12, including the six-point victory over the Miners on Nov. 13 earlier this season.

That game marked the most points for UTEP against the Aggies in seven years. UTEP tallied 77 in a one-point win on Nov. 22, 2014.

GET TO KNOW NM STATE

NM State returned four starters and five lettermen total from last year’s team that finished 12-8 during a heavily Covid-affected campaign that prevented the Aggies from even playing a game in Las Cruces throughout the entire season.

They were one of two teams in the nation without a home game. NM State went 7-6 in WAC action and advanced to the 2021 tournament championship game.

The Aggies also brought in 13 newcomers.

NM State won three straight and five of six out of the gates before falling to rival New Mexico, 101-94, last time out on Nov. 30.

They were picked first in the WAC with transfer Teddy Allen, Johnny McCants, Jabari Rice and Donnie Tillman being named to the All-Preseason team.

NM State is under the direction of fifth-year head coach Chris Jans, who is 100-27 in that timeframe.

New Mexico State is a major university in Las Cruces, N.M., which was founded in 1888 under the name of Las Cruces College.

Notable alumni include actor Scott Bailey, who is best known for his playing the role of Sandy Foster on the CBS soap opera Guiding Light, and former Olympic basketball player Chito Reyes. Additionally, Clyde Tombaugh, who discovered the planet Pluto (since reclassified to a dwarf planet), taught astronomy at the school from 1955 until his retirement in 1973. 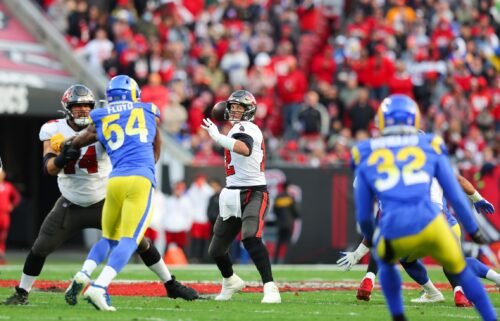