Former Vice President Mike Pence is no longer keeping his cards close, telegraphing in several high-profile moves this week that he is actively exploring a 2024 presidential bid and working to gain a foothold in Trump-fatigued corners of the Republican Party.

These speeches and appearances undoubtedly reflect the former vice president’s towering political ambitions. While a person familiar with his thinking said Pence has not yet “firmly” decided on a presidential run, he is spending the bulk of his time laying the groundwork and strengthening his ties to key players inside the GOP to ensure he is well-positioned should he announce a bid later this year or next.

On Monday, Pence threw his weight behind Arizona GOP gubernatorial hopeful Karrin Taylor Robson, whom he will rally alongside on Friday. It was the latest move in a proxy war between Pence and former President Donald Trump, who is slated to hold his own campaign rally on Friday for rival candidate Kari Lake. Ahead of Friday’s split-screen between the two men, Pence aides have circulated a past Facebook post by Lake where she dismissed Trump as “not my president” just days before his 2017 inauguration.

On Wednesday, Pence returned to Capitol Hill for the first time since he left office to meet with conservative members of the Republican Study Committee, a group he once helmed as a congressman from Indiana and whose current leader, Rep. Jim Banks of Indiana, has previously identified himself as an early supporter of a potential Pence 2024 campaign. Pence’s visit came just a day after Senate Minority Leader Mitch McConnell seemed to encourage other Republicans to challenge Trump in a primary if the former President decides to launch another White House campaign, as is widely expected. Pence also introduced House Minority Leader Kevin McCarthy at a “Young Guns” fundraising dinner on Tuesday night, per a source familiar, underscoring his efforts to maintain close ties to top Republican leaders.

“I think we’re going to have a crowded field for president,” McConnell told reporters on Tuesday when asked how he might confront a third White House bid by Trump. “I assume that most of that will unfold later, and people will be picking their candidates during a crowded primary field.”

Later Wednesday, Pence delivered remarks in South Carolina, an early presidential primary state, where he outlined a path forward for abortion opponents in “a post-Roe America” — urging Republicans to slash red tape for families looking to adopt and bar the US Postal Service from delivering mail-order abortion pills.

“As we gather tonight, we must recognize that we’ve only come to the end of the beginning. Standing here in the first days of a post-Roe America, we must resolve that we will not rest, we will not relent until the sanctity of life is restored in the law of every state in the nation,” Pence told a crowd at the Florence Baptist Temple, stopping short of endorsing a national ban on elective abortions.

The former vice president has previously signaled interest in banning abortion in all 50 states, either through individual state measures or a national ban. Next week, Pence will outline his policy blueprint for Republicans, dubbed the “Freedom Agenda” by his group Advancing American Freedom, in a speech at the Heritage Foundation in Washington.

Even as Pence lays the groundwork, all of these moves are happening against the backdrop of Trump’s own 2024 machinations and his public criticism of Pence both before he refused the then-President’s pressure campaign to block certification of the electoral votes on January 6, 2021, and in the year and a half since.

During a private breakfast meeting near the US Capitol on Wednesday, RSC members thanked Pence for his actions on January 6 and encouraged him to run for President, according to multiple attendees.

Rep. Don Bacon, a Nebraska Republican, said lawmakers offered Pence encouraging words about a potential presidential bid, saying they hope he plays a big role in 2024 and that they need more voices like his in the party.

Pence responded with a smile, according to Bacon, but did not tip his hand about his plans for his political future even as he prepared to fly to South Carolina later that afternoon.

Rep. Dan Newhouse, a Washington Republican who voted to impeach then-President Donald Trump for inciting the deadly insurrection, confirmed to CNN there were multiple references to a potential Pence presidential bid during their closed-door meeting.

Pence, however, told lawmakers that he is focused right now on helping the House GOP win the 2022 midterms and offered to stump for members on the campaign trail, according to attendees. Pence also handed out a lengthy booklet detailing his agenda and policy vision for the country.

Pence’s visit with the RSC, the largest conservative caucus in Congress, represents an attempt to maintain key congressional alliances as he explores a potential White House run.

The meeting also comes on the eve of potentially the last prime-time hearing from the House select committee investigating the deadly riot at the US Capitol. The committee has revealed stunning details about Trump’s pressure campaign on Pence and others to overturn the 2020 election. The panel is still weighing whether to ask Pence to speak with the committee, according to members.

But despite a growing rift between Trump and Pence, Republicans on Capitol Hill had no qualms about heaping praise on Pence, a former member of the House who once chaired the RSC.

Rep. Andy Barr, a Kentucky Republican, confirmed that RSC members thanked Pence for his conduct on January 6, when he refused to give in to Trump’s demands to object to the certification of the 2020 election results.

“Let me just say: the vice president is a real moral force in our party,” Barr said. “He’s a real true leader, and he’s earned the respect of Republicans and other Americans all over the country.”

Rep. Chip Roy of Texas, who also belongs to the hardline House Freedom Caucus and voted to certify the election results, is one of the members who stood up and thanked Pence, according to a source inside the room. The comments were met with loud applause, the source said.

One topic that did not explicitly come up during the meeting was Trump himself, according to attendees. But Pence did praise the Trump agenda and talked up some of the victories they scored under the Trump presidency. Pence also brought up the recent Supreme Court ruling that overturned the constitutional right to an abortion, attendees said.

Prior to the meeting, Pence’s former chief of staff Marc Short, who has testified to the select committee, was standing outside with Pence’s brother Rep. Greg Pence of Indiana and RSC Chairman Jim Banks, also of Indiana, who hosted the gathering. After the former vice president arrived, he greeted the trio and they all walked inside.

Leaving the meeting, Short did not answer questions about Pence’s remarks or the ongoing January 6 investigation.

Finding a foothold in the GOP base

At the South Carolina church on Wednesday, Pence addressed an audience of grassroots and religious conservatives who, like him, have spent years working to return the question of abortion rights to individual states. It’s these types of voters who flocked to Trump’s 2016 campaign after he added Pence, the genteel former Indiana governor, to his ticket, and the former vice president is hoping he can regain their favor ahead of a possible White House run.

Pence previously spoke on the same topic last November at an event hosted by Susan B. Anthony Pro-Life America, a prominent anti-abortion group on the political right whose president, Marjorie Dannenfelser, is a longtime friend and ally of Pence and has privately counseled him on the issue as he considers his future. That appearance came on the eve of oral arguments in Dobbs v. Jackson Women’s Health Organization, the landmark case that eventually led the Supreme Court to overturn federal abortion rights this year.

Pence used his remarks to deliver a blueprint of sorts to his fellow Republicans to strengthen abortion restrictions and further limit the federal government’s involvement in the issue. From protecting the Hyde Amendment, which blocks federal funding for most abortions under Medicaid, to de-regulating the adoption industry, Pence said abortion opponents should continue to work toward such goals now that the Supreme Court has ended federal abortion rights.

“It should not cost the average American worker more than a year’s worth of wages to adopt a child,” Pence said, adding that “if you’re going to be pro-life, you need to be pro-adoption.”

Unlike other Republicans who have largely avoided the topic of abortion since the June decision — many of whom are running for reelection in 2022 — Pence has been working to underscore his socially conservative bona fides by leaning into the issue of abortion. 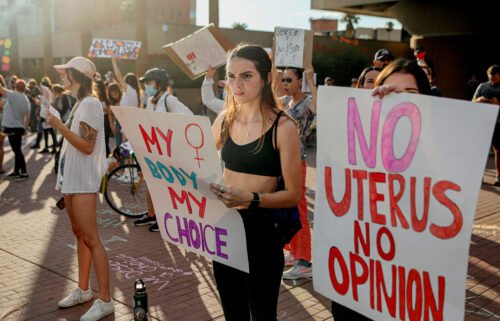