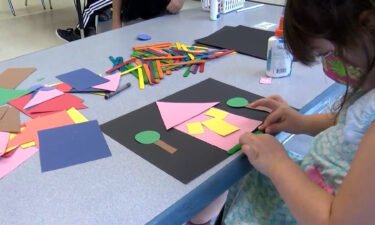 EL PASO, Texas (KVIA) -- The pandemic has put extreme pressure on food banks all across the country. The El Pasoans Fighting Hunger Food Bank has served as a lifeline for thousands of people in the Borderland over the last year.

"I've had to get food from it quite a few times, but that's kind of hard to admit to," said Borderland resident Tammi Say.

Say's local food pantry, which receives its food from the El Pasoans Fighting Hunger Food Bank, has served as a safety net. She visits every so often, when her kitchen is low and her money has run out for the month.

"You don't know who's hungry or needing food until somebody shows up on your doorstep, you know, at a food pantry," she said. "Saying 'Hey I have nothing. My kids are hungry. I'm hungry.'"

It's difficult to imagine what life would look like without a food bank in El Paso. Just about ten years ago, that was a reality. El Paso's food distribution was being run by the West Texas Food Bank in Odessa, which is about four hours away.

Berg was the first El Pasoan appointed to the West Texas Food Bank's board.

"I began to see that there was a need for an El Paso-based food bank," Berg said. "For years and years, we had a huge population that was underserved."

Establishing a food bank in El Paso was no small feat. Berg said it took about eight years. He had to petition the organization that oversees food banks nationwide and he had to get the community on board.

"I think most of El Paso has never understood what a food bank was," Berg said. "People have this misconception that the people who are asking for food out of the food bank are these guys on the street corners with signs that say 'Will work for food.'"

It's a misconception that might have changed during the COVID-19 pandemic. Day after day, lines for food at the El Pasoans Fighting Hunger Food Bank stretched around the building's block.

"I frankly don't know what this community would have done without a strong food bank to make sure that people got the food they needed to weather this," said CEO Susan Goodell.

Goodell has helped lead the charge to grow the food bank over the past few years.

When El Paso's food was tied to the food bank in Odessa, El Paso received about 480,000 lbs. of food each year. Last year, that number skyrocketed to more than 139 million lbs.

The food bank doubled its staff during the pandemic, and more than quadrupled its capacity in 2020.

"I would say that rather than being a reflection of need, it was a reflection on what the capabilities of the food bank were," Goodell said.

Goodell estimates the food bank has served as many as one in every four El Pasoans during the pandemic.

Say says it has made a difference.

"Thank you," she said. "That's all I can say is thanks for being there."

A donation of just $1 can provide up to seven meals for those who cannot afford food. You can donate here and learn more about volunteering here.