Zambian leader Hakainde Hichilema is basking in the glow of his historic win in last month’s election during his first visit to the United States as president.

On Thursday, he became the first Zambian president to visit the White House since 1992, a rare honor that world leaders covet.

His defeat of President Edgar Lungu was “democracy in action,” his host Vice President Kamala Harris said, while sharing memories of her visit to Lusaka when she was 5 years old.

The two leaders swapped victory stories and congratulated each other for their respective elections.

“We too were delivered by the people of Zambia in a substantial way under very difficult circumstances with the democratic space not being available,” he said to nods from Harris.

Hichilema’s trip in Washington has also included a meeting with the World Bank and International Monetary Fund leaders as he tries to ride the wave of international attention to pull his country out of a debt crisis and secure funding for an economic revival.

Zambian historian Sishuwa Sishuwa told CNN that there was likely to be increased Western support following August’s election that saw an opposition candidate triumph. “There are huge challenges he’s inherited,” the University of Zambia lecturer says. “Corruption was intensive under Lungu, human rights were violated, and democracy was seriously eroded. So he has to not just tackle the economy but embark on political reform.”

Hichilema is capping off a week of firsts after delivering his maiden speech at the UN General Assembly in New York as the Southern African country’s seventh president.

“The outcome of our election was determined by those who vote, and not those who count the votes,” he told a socially distanced hall of listeners in the early evening Tuesday, referring to his massive victory over Lungu.

It was close to 2 a.m. back in Lusaka but some at home stayed up to watch and many congratulated him as soon as the text of the speech was posted on his Facebook page.

Last month’s peaceful political transition was an inspiration to the rest of African continent, Hichilema said, echoing the US President’s recognition of democracy in Zambia in his own speech earlier in the day.

“It lives in the young people of Zambia — who harnessed the power of their vote for the first time — turning out in record numbers to denounce corruption and chart a new path for their country,” President Joe Biden had said in his own first address to the Assembly.

President Hichilema was creating a buzz even before he got to New York. Instead of the luxurious presidential jets and large entourages preferred by many African delegations, he flew commercial on Qatar Airways and brought with him just two ministers.

A statement said he kept the team “lean and functional to be more productive and cost-effective.”

Bally, as his supporters call him, styles himself as the CEO of Zambia Limited. At the UN, he said his government’s priority was to “restore macroeconomic stability, attain fiscal and debt sustainability and promote economic growth.”

He has created a new ministry of Green Economy and Environment to tackle climate change and is reviewing the country’s cash-rich mining sector.

Hichilema ran for president five times before he won and says he has been arrested 15 times since he joined politics.

“Things can be done better, and we intend to do things better for the people that put us in office,” he told CNN’s One World show before he left for the US. “It’s a leadership question, making sure that we respect constitutionalism, democracy and its attendant instructions; and to make Zambia a beacon of hope for democracy in Africa.”

As opposition leader, Hichilema was even jailed for 100 days for treason for allegedly endangering Lungu’s life by refusing to give way for his entourage. He lost two elections to Lungu that he believes he won but is moving forward. He smiles when the question comes up.

“We have a lot of energy, but it will not be wasted on revenge, retribution or indeed, any negative vices,” the president told CNN. “We know what was done wrong against us and who did what but we’re not here to avenge. If we did that, it means that we don’t occupy any higher ground than those who did that to us.”

Zambia became the first African country to default on its debt during the pandemic and President Hichilema now says he’s in talks with its lenders for a possible bailout.

“Our message to the global financial community is that we’re here to do business. We respect the debts that are there and we’ll work together to come out of this debt crisis that Zambia has found itself in,” he said in the CNN interview.

Hichilema defeated outgoing President Edgar Lungu in a landslide by almost 1 million votes in his sixth attempt at becoming leader of Zambia.

It was a stunning turnaround for the politician known as HH — Hichilema spent several months in prison in 2017 for what were widely seen as politically motivated treason charges. The charges were dropped under intense international pressure. 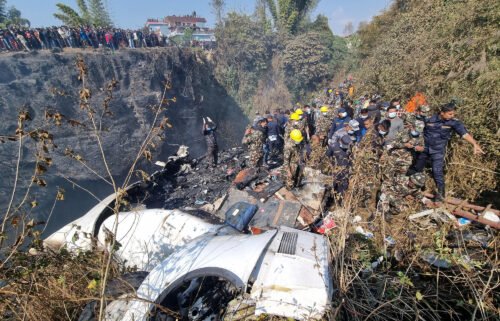