While the NBA has been trying to manage its relationship with China over the past few weeks, fans back home have served notice they’re not to be ignored politically either.

Going by the alias Sun, a Chinese-American NBA fan raised $43,000 in just over two days on GoFundMe to distribute 13,000 pro-Hong Kong T-shirts outside the Staples Center in Los Angeles before the league’s opening night game between the Lakers and Clippers.

Sun told CNN he chose to keep his identity hidden for reasons of “privacy and safety” for him and his family.

The T-shirts were printed with the slogan “Fight for freedom, stand with Hong Kong,” echoing the instigating tweet from Houston Rockets general manager Daryl Morey that was posted — and quickly deleted — on October 4.

“It’s a huge game,” Sun said, citing the marquee matchup between LeBron James and Kawhi Leonard that was sure to generate millions of eyeballs. “I thought this would be a good opportunity to show the NBA that we stand for free speech.”

China’s state-run CCTV has been operating a blackout on NBA games since Morey’s tweet. The broadcaster released a statement over the weekend saying NBA commissioner Adam Silver would “face retribution” for alleging Chinese officials had asked him to fire Morey, saying the comment was “fabricated.”

Tencent, the NBA’s partner for online streaming in China, did not broadcast Tuesday’s earlier game between the Toronto Raptors and New Orleans Pelicans, according to ESPN, but was planning to run the game between the Los Angeles rivals.

Although a smattering of fans grabbed T-shirts from volunteers in the surrounding blocks of the Staples Center, only a few could be seen among the sellout crowd. Many wore either Lakers jerseys or Clippers shirts which were also given away for free in the arena.

The cause was still worth the effort said Sun, a thirty-something native of the Bay Area who works in IT.

“The reason I decided to do something was because it was starting to affect us as Americans,” he said of the Chinese stance on the NBA. “This Chinese culture of suppressing dissent, they are trying to export that and get American companies to self-censor their employees and make Americans afraid to say what they think about China and Hong Kong.”

An NBA spokesman did not immediately respond to a request for comment on the display of T-shirts making a political stance at NBA arenas. Fans have worn similar T-shirts recently in other NBA arenas without incident, however two fans were escorted out of the Wells Fargo Center in Philadelphia for holding up a sign and chanting a slogan.

“They told me ‘no politics,'” said Sam Wachs, who was at the preseason game earlier this month with this wife. “I asked why and they told me not to give them a hard time. A little after the signs were taken away, I stood in my seat and chanted ‘Free Hong Kong’ until security escorted us out.”

The 76ers released a statement to CNN at the time about the game. “Following multiple complaints from guests and verbal confrontations with others in attendance, two individuals were warned by Wells Fargo Center staff about their continuing disruption of the fan experience. Ultimately, the decision was made by Wells Fargo Center personnel to remove the guests from the premises, which was accomplished without incident,” the statement said.

Sun pointed out to people planning to wear the shirts to respect their fellow fans and staff at the game. He also expressed sympathy for LeBron James for not wanting to comment further on the topic, after causing a stir himself last week by saying Morey was “misinformed” on Hong Kong.

READ: Pride at stake for both China and NBA over $4 billion fallout

“I totally understand if he feels like it is not his place to have an opinion,” Sun said. “What I can’t accept is him internalizing this culture of self censorship. When he says people should be careful what they say … I don’t agree with that.” 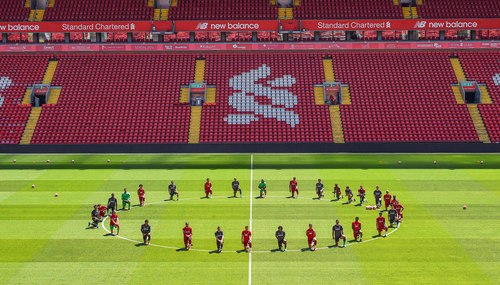