The director of the US Centers for Disease Control and Prevention warned a second wave of the coronavirus this year could be worse because it will coincide with flu season.

“There’s a possibility that the assault of the virus on our nation next winter will actually be even more difficult than the one we just went through,” CDC Director Dr. Robert Redfield said in an interview with The Washington Post.

“And when I’ve said this to others, they kind of put their head back, they don’t understand what I mean.”

Redfield told the Post that having two respiratory outbreaks would burden the health care system.

He had previously warned that the United States will feel the impact of the virus in months and years ahead, telling CNN Chief Medical Correspondent Dr. Sanjay Gupta in February that the virus “is probably with us beyond this season, beyond this year.”

During a CNN coronavirus town hall in April, Redfield reiterated that next year “will be another challenging time.”

A few states are moving toward reopening their economies amid the coronavirus pandemic, but some local leaders don’t want their residents to go along — even as idled workers weigh the benefits of getting paychecks again.

In Georgia and South Carolina, Republican governors announced they’ll ease restrictions this week despite neither meeting White House recommendations of a two-week downward trend in cases before lifting measures in phases.

Local governments can’t countermand the decision — but some mayors are asking their residents to stay home.

“I’m exhorting everybody in this community to continue to shelter in place,” Athens-Clarke County Mayor Kelly Girtz told CNN on Tuesday, pointing toward the federal guidelines. “Do not reopen at this point. It’s not the time to do it.

“It’s like telling your quarterback, ‘We don’t have a helmet for you, we don’t have pads, but get out there on the field and just try not to get sacked,'” said Girtz, who’s identified as a Democrat, though Georgia municipal races tend to be nonpartisan.

In the Georgia city of Albany, with a relatively high number of cases, Mayor Bo Dorough wants the state to give him an exception so he can keep nonessential businesses closed to hinder the spread of the virus.

Atlanta Mayor Keisha Lance Bottoms told CNN Tuesday that she’s exploring whether the city has legal grounds for putting different orders in place than what Kemp has announced.

“I have searched my head and my heart on this and I am at a loss as to what the governor is basing this decision on,” she said.

Bottoms urged Atlantans to stay home, saying the city is “not out of the woods yet.”

Kemp’s announcement surprised members of the state Covid-19 task force appointed by Kemp, task force co-chair Bernice King said in a Facebook video. King said she found out in a text message from a friend.

It wasn’t just the local leaders. US Sen. Lindsay Graham of South Carolina expressed doubts about Kemp’s plan, tweeting, “I worry that our friends and neighbors in Georgia are going too fast too soon.”

For some, a difficult decision

But millions across the country are newly unemployed and many businesses are hurting — even some medical centers. Many rural hospitals, for instance, are facing financial ruin and have furloughed tens of thousands of employees as they’ve been forced to cancel elective procedures.

In South Carolina, GOP Gov. Henry McMaster allowed some businesses — such as bookstores, flower shops and flea markets — to reopen Monday afternoon, even as the state’s leading epidemiologist announced the state had not seen a two-week downward trajectory.

Josh Outlaw-Hughes, a furniture salesman in West Columbia, told CNN that deciding whether to work will be hard. He doesn’t want to infect himself or others, and so he would rather stay home until health professionals assure him it’s safe, he said.

“But at the same time, I’m running really low on money. So, I’m between a rock and a hard place of: Do I go back to work to try and make money and risk getting sick? Or do I stay home and go broke?” Outlaw-Hughes said Monday.

More than 824,000 people in the US have been infected with the virus, according to Johns Hopkins University. At least 45,000 have died.

Some of the surge in deaths came as some states began to report probable Covid-19 deaths without supporting lab tests. It’s not always clear when those deaths happened, so it is difficult to compare the totals day by day.

Which states are moving toward reopening

The governor allowed beaches there, closed in late March, to reopen to public access as of noon Tuesday, though local governments can keep them closed.

Myrtle Beach and Folly Beach are among those still closing their beaches to the general public.

Tennessee Gov. Bill Lee, a Republican, this week announced the vast majority of his state’s businesses will be allowed to reopen on May 1. Some businesses may be able to reopen as soon as Monday, the governor said. At least 7,238 residents have contracted the virus and 152 have died.

In Alaska — with at least 321 cases and 9 deaths — GOP Gov. Mike Dunleavy announced he intends to relax some of the state’s restrictions this week, allowing some businesses — such as restaurants and hair salons — to reopen.

“We’re going to try to do everything we can to move Alaska back and get Alaskans back to work,” Dunleavy said.

Dunleavy said restaurants would be required to allow only members of an immediate family to sit together and may have to take reservations to ensure that social distancing can be maintained.

In Georgia, Kemp said Monday his state was “on track” to meeting the federal government’s guidance to have a 14-day continuous decline in coronavirus cases before reopening.

Last week, more than 5,700 new coronavirus cases were reported in Georgia, a rate that was down about 6% from the week before, but still higher than the week that ended April 5, when fewer than 3,800 new cases were reported. The numbers are based on data collected by CNN and Johns Hopkins University.

Georgia saw day-over-day increases in reported cases Saturday through Monday, but each day’s total was below Friday’s, according to JHU. New case numbers can be affected by changes in the number of tests conducted and the time it takes for testing data to be reported to authorities.

Kemp acknowledged case rates may rise in his state — but argued Georgia is prepared.

“We’re a lot better prepared for that now than we were over a month ago,” he said. “We have the hospital bed capacity. … The ramped up testing we’re doing, the contact tracing that we’re going to be doing … I believe we’ll be able to stay on top of it. “

“Our small business owners are seeing sales plummet, and … contract workers are struggling to put food on the table,” he said.

Kemp was interviewed on Fox News on Tuesday night and repeatedly defended his decision, saying, “This is not a giant leap forward.”

When pressed on how guidelines would be enforced at businesses at which people may be in close quarters, such as a gym, he said, “I’m willing to give [business owners] the benefit of the doubt.”

“The same could be happening at the grocery store and other places. … I have great confidence in them” spreading people out and sanitizing areas, he said.

In Florida, where beaches in Jacksonville reopened last week, the mayor in Miami-Dade County said that wasn’t happening in his jurisdiction any time soon.

Mayor Carlos Gimenez, a Republican, said reopening the county will be determined by medical experts and when that time comes, it will require social distancing, face coverings and groups of no more than 10 people — with those regulations enforced by police.

Meanwhile, Rhode Island Gov. Gina Raimondo, a Democrat whose stay-at-home order expires May 8, said cases are still on the incline — and before lifting restrictions, she said the state would have to hit some milestones, including a continuous decrease in cases and an ability to support vulnerable populations.

In West Virginia, Gov. Jim Justice announced Tuesday that public schools will close through the academic year, making 37 states and Washington DC that have either closed schools or recommended they be closed through the school year.

US needs to perform millions of tests per week, experts say

The United States needs to be able to perform millions of coronavirus tests each week before restrictions can be safely lifted, economists and public health experts say in two different plans for reopening society.

A second, published Monday by Harvard University’s Edmond J. Safra Center for Ethics, the US should deliver at least 5 million tests per day by early June to begin reopening. It says as many as 20 million tests per day would be needed to fully remobilize the economy, ideally by late July.

So far, the US has performed only about 4 million coronavirus tests in total, and governors have reported continued shortages of the materials needed to run tests, from chemical reagents to swabs.

New York Gov. Andrew Cuomo said he and Trump discussed testing during a Tuesday meeting at the White House.

“How do we separate the responsibilities and the tasks on testing vis-a-vis a state and the federal government and the acknowledgment that we will need to work together on this? It has to be a real partnership,” he said via phone on MSNBC.

The two spoke about the need for state government funding, and Cuomos said Trump seemed “very open and understanding of that” and said he would be open to that in the next round of legislation.

The US Food and Drug Administration on Tuesday said that it has issued an emergency use authorization for a coronavirus diagnostic test that allows for patients to collect their own samples at home and then mail those samples to a lab for testing.

The authorization was issued to LabCorp, which intends to make its Pixel by LabCorp COVID-19 Test home collection kits available to consumers in most states, with a doctor’s order, in the coming weeks, the FDA said.

The kit includes a Q-tip-style cotton swab that patients will use to collect their sample, the FDA said. 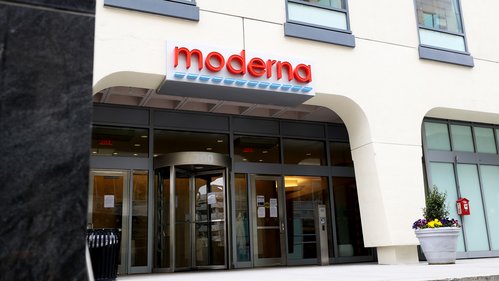 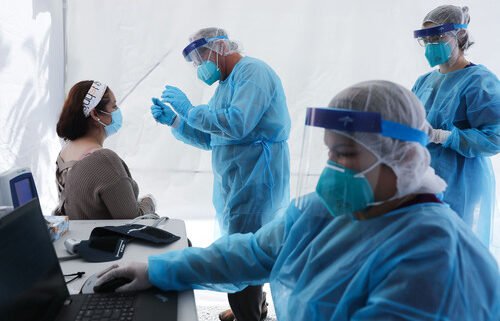