EL PASO, Texas - The UTEP men’s basketball team scored the first 11 points on the way to a wire-to-wire 67-53 win against FAMU in front of 4,000-plus fans on Thanksgiving Eve at the Don Haskins Center Wednesday night.

Both missed their second straight game due to COVID-19 protocols.

Tydus Verhoeven added seven gutsy boards to help the efforts in that department, with the Miners holding a 39-32 advantage on the glass.

“I thought JB (Jamal Bieniemy) was special,” UTEP head coach Joe Golding said. “He trusted his teammates, got them involved, hit shots. Keonte (Kennedy) did some good things. If you rebound and defend, you’re going to play for UTEP.”

Defense reigned supreme at the onset, with neither team scoring for the first five minutes of the game.

UTEP got things going out of the media break, tallying 11 straight points over the initial before the Rattlers finally got on the board.

It was Bieniemy with all four Miner field goals early and four free throws on as many attempts from Bonke Maring to empower the offense for a 13-2 edge with 11:34 left in the stanza.

The bucket kicked off the sequence in which the Rattlers took advantage of UTEP going cold to whittle the deficit down to one (25-24) with 1:52 to play in the period.

The Miners scored five of the final six points in the frame en route to leading by five (30-25) at the break.

It was scrappy play from both sides over the first eight minutes of the second half, with UTEP up by two (37-35) with 11:20 remaining in regulation.

It was down to one after a FAMU triple, but Bieniemy’s old-fashioned 3-point play countered it.

Kennedy then flew in for an offensive rebound and putback, giving the Orange and Blue some breathing room at 44-38 with 7:50 to play in the game.

Those two big plays loomed large with FAMU never getting closer than a single possession down the stretch.

“I’m just so thankful for our fan base” Golding said. “It’s Wednesday night, the night before Thanksgiving and we have 4,000-plus people here. We have a passionate fan base that cares about basketball. Myself and our players are very, very appreciative of that.”

UTEP has a much-needed break before returning to action for the second round of the Battle Of I-10 against NM State at 6 p.m. MT on Dec. 3.

Jon Teicher (41st year) and Steve Yellen (19th year) will be on the call, which can be followed on "The Home Of UTEP Basketball" 600 ESPN El Paso and the UTEP Miners App.

It will also be streamed on Stadium.

For tickets, fans may call the Eisenberg Family Ticket Office at (915) 747-UTEP, email tickets@utep.edu, or visit www.UTEPMiners.com/tickets or in person (Brumbelow Building on UTEP campus, 201 Glory Road) Monday thru Friday, 8 a.m. to 5 p.m. 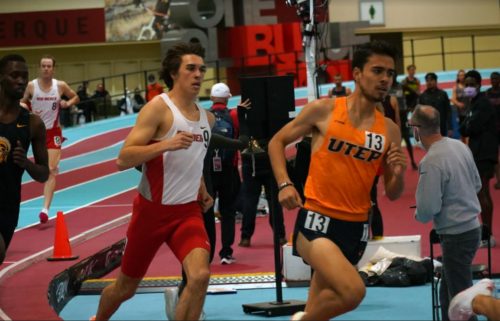